As we go to press, the pound has managed to bounce back after its initial drop on the back of the UK GDP data. According to the ONS, economic growth slowed to half a per cent in the third quarter from a rate of 0.7% during the previous three months.  Analysts were expecting a more moderate slowdown to 0.6%, hence the initial negative reaction of the pound. On a year-over-year basis, GDP grew 2.3 per cent, which was also weaker than expected. The slowdown in economic growth was driven by the biggest drop in UK construction in three years, falling 2.2% in Q3. However, the other key sectors fared far better with services expanding a good 0.7% between July and September, while production rose 0.3% and agriculture 0.5%. Separately, the 3-month moving average of the Index of Services grew 0.9% in August and was up from 0.8% recorded in the previous month.

With the most important services sector growing robustly, the headline miss on GDP should be taken with a pinch of salt and judging by the Cable’s v-shaped intra-day bounce, that’s exactly how speculators have so far responded. Traders are also wary of the fact that this is merely the preliminary estimate, which is thus subject to revision. The focus will now shift to across the pond with a few important US macro pointers to provide some short-term direction this afternoon ahead of tomorrow’s policy statement from the Federal Reserve and Thursday’s release of the Advance US GDP estimate.

Durable Goods Orders are expected to have fallen 1.1% while core orders are seen flat month-over-month in September. Flash Services PMI is expected to show a slight improvement to 55.3 in October from 55.1 previously. But today’s key US number will likely be the Conference Board’s Consumer Confidence Index. Although this is expected to moderate to 102.5 from 103.0 in September, the dollar may move sharply if the actual number deviates significantly from these figures.

Ahead of the US data and after the UK GDP release, the GBP/USD is currently trading just above its 200-day average at 1.5335 after managing to bounce off a short-term bullish trend line and the 50% retracement level of the most recent upswing at 1.5305, earlier. But with the Cable still being inside the converging trend lines, it is still technically in consolidation. But a potential break below 1.5305 would favour a move to at least the 61.8% Fibonacci retracement at 1.5260 and possibly a revisit of the longer-term support at 1.5100. Meanwhile on the upside, resistance and the 50-day moving average converge at 1.5375/80, followed by the short-term bearish trend at 1.5415. If the latter breaks then the GBP/USD may head back to the previous key resistance at 1.5500 before deciding on its next move. 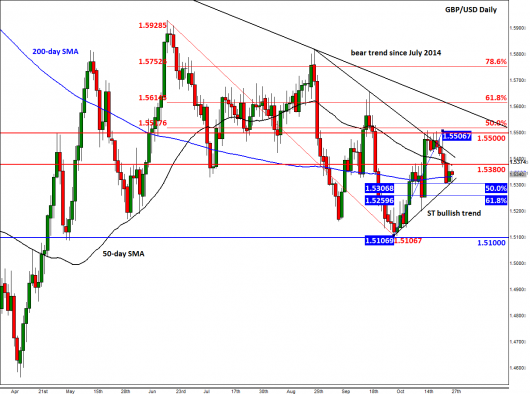