Most major FX pairs are starting off the week on a quiet note as traders try to squeeze in last-second summer vacations and the economic calendar got off to a slow start. By contrast, the performance of EM currencies so far today has been far more interesting, with the JP Morgan Emerging Market Currency Index hitting a new record low below 70.00, down over 36% from the peak set back in 2010: 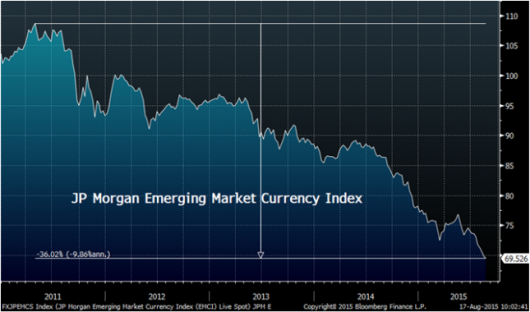 The latest bout of weakness is being chalked up to China’s surprising decision to devalue its currency last week. Beyond the direct impact of a weakening renminbi as an emerging market currency itself, China’s recent actions also imply that the world’s second-largest economy will also be competing more aggressively in its major export markets, many of which overlap with its Southeast Asian rivals. In the grand scheme of things, the renminbi’s 3-4% devaluation against the greenback pales in comparison to the much stiffer selloff in most other currencies of late, so China’s decision to break its de facto peg with the US dollar may not necessarily portend anything too ominous about China’s economy or the rest of the emerging world. In other words, the renminbi is just playing “catch up” with most of the world’s currencies, which have almost unanimously depreciated against the buck in the last year.

One casualty of China’s big decision has been South Africa’s economy, which is heavily dependent on exporting metals to China. USD/ZAR tagged a new 14-year high at 12.90 earlier today, and bulls are now turning their attention to the psychologically-significant 13.00 handle. The secondary indicators are still generally supportive of further rallies, with the MACD trending higher above its signal line and the “0” level, and the RSI indicator not yet in overbought territory. In the short-term, the pair’s bias will remain higher as long as rates hold above the bullish trend line near 12.60 and the 50-day MA at 12.45.

From a fundamental perspective, Wednesday will be the day to watch, with key CPI data out of both the US and South Africa, South African retail sales data, and of course, the minutes from the July FOMC meeting all scheduled for release. 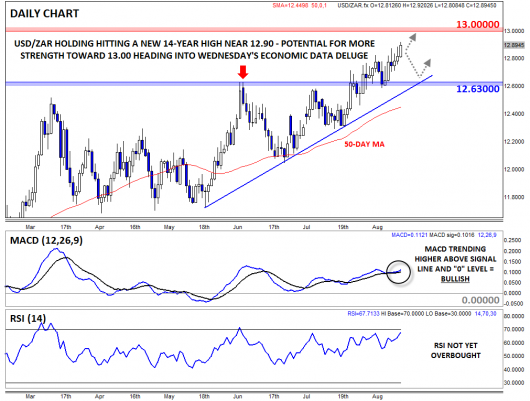