It’s been a rough start to 2016 for China bulls and anyone else dependent upon solid growth in the world’s second-largest economy. After Monday’s Chinese stock market washout, sentiment toward the Middle Kingdom stabilized yesterday, but that was merely the calm before today’s storm.

The panic kicked off with the daily fix of China’s currency, the renminbi. The People’s Bank of China (PBOC) set the currency’s daily reference rate at 6.5314 against the dollar, its lowest level since April 2011. This marked the seventh consecutive day of devaluation, prompting traders to wonder whether Chinese authorities are seeing signs of an imminent economic slowdown and taking actions to prepare and try to soften the blow. In everyday terms, today’s move by the PBOC is akin to seeing your local weatherman buying a generator and boarding up the windows to his house, even if he hasn’t publicly mentioned an incoming storm. 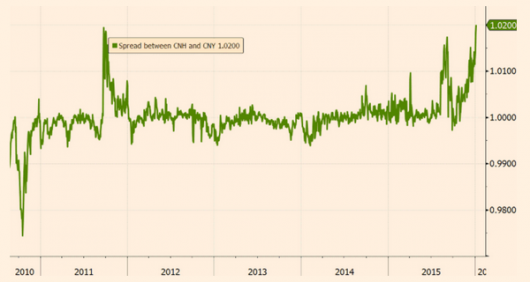 While the majority of traders don’t focus on trading China’s currency directly, concerns about a slowdown the world’s second-largest economy have a big influence on the region and market sentiment as a whole. Global equities are trading 1-2% lower across the board, and the carnage has predictably spread to the currencies of China-dependent economies including the Australian dollar.

As we go to press, AUD/USD is trading nearly 100 pips lower on the day, breaking its 4-month bullish trend line in the process. The secondary indicators further bolster the bearish case: the MACD has turned lower to cross below the “0” level, showing a shift to bearish momentum, while the RSI has broken its own bullish trend line.

After today’s big technical breakdown, AUD/USD bears clearly have the upper hand in the short term. To the downside, the next support levels to watch will be key psychological support at the .7000 handle, followed by the early September low near .6900. Even if we see a bounce and move back above the bearish trend line near .7120, buyers may be hesitant to jump in unless rates can clear previous resistance around .7300. 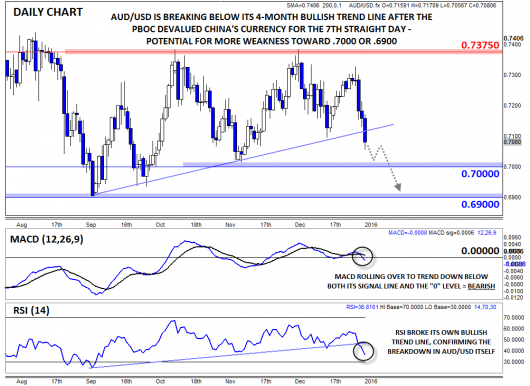