What you need to know about the Tesla stock split

What is a stock split?

A stock split is when a company divides the number of existing shares in issue into multiple new shares, causing the number of shares to increase by a predetermined multiple. This is designed to reduce the price of each share without impacting the overall value of the business. Put another way, the size of the pie stays the same, it is simply cut into more slices after a stock split is complete.

For example, a 2-for-1 stock split would mean every existing investor will receive 2 shares for each 1 they already own. If they held 10 shares before the stock split, they would have 20 shares after the split is completed.

Read more: What are stock splits and how do they impact investors?

Tesla said in March 2022 that it planned to ask shareholders to approve a plan to conduct a stock split at this year’s annual general meeting (AGM).

Tesla was expected to reveal the details of the stock split by filing a proxy statement before the end of April but missed this deadline and warned it wouldn’t be able to make the filing until later this year, without providing any specific timeframe.

For now, Tesla has not signalled that the stock split has been delayed or cancelled but investors do not have any clarity on the stock split plan, including the ratio that will be used.

When is the Tesla stock split?

Firm dates for the stock split have not yet been set. Tesla will need to make the appropriate filings before the AGM if it wants to secure the backing of investors at the AGM this August. Tesla managed to complete its last stock split within a month of announcing it last time around, suggesting it could be finalised before the end of August if its proposal is tabled to shareholders at the meeting.

Failing that, it will not be able to secure the necessary approval needed to complete the stock split and may have to delay its plan and schedule a new meeting.

Why is Tesla conducting a stock split?

The main aim of a stock split is to lower the value of each individual share so they are more affordable to buy and trade, which improves liquidity by making the stock more accessible to more people – particularly individual retail traders with less money to deploy.

This in turn can provide a catalyst for the stock by bringing more investors and traders into play. Tesla conducted its first stock split, at a 5-to-1 ratio, back in August 2020. The move proved to be a huge catalyst for the stock, which managed to rally almost 60% between the stock split being completed and the end of 2020. The surge in value helped propel Tesla into the S&P 500 index that year.

The need for a catalyst is even greater this time around. Tesla shares currently trade at $659 as of the close on May 25, having fallen almost 40% since the company unveiled its stock split plans in late March, when it was trading at over $1,090 per share.

The price of Tesla shares, even after the heavy selling pressure it has come under in 2022, means investors must deploy more capital in order to buy a material number of shares in the company. But a stock split will allow them to buy a larger number of shares for the same amount. For example, if Tesla was to opt for the 5-for-1 ratio once again then the price of each individual share would fall to $131.80 from the current share price of $659.

Stock splits are becoming increasingly popular among the largest corporations in the US. Major players including iPhone maker Apple and chipmaker NVIDIA have completed stock splits in recent years, while Amazon and Alphabet are both launching 20-for-1 stock splits in 2022.

Read more: Everything you need to know about the Amazon stock split

Read more: Everything you need to know about the Alphabet stock split

Below is a chart outlining when all these companies announced their most recent stock split (and the last two for Tesla) to demonstrate how their shares have performed in the wake of an announcement. 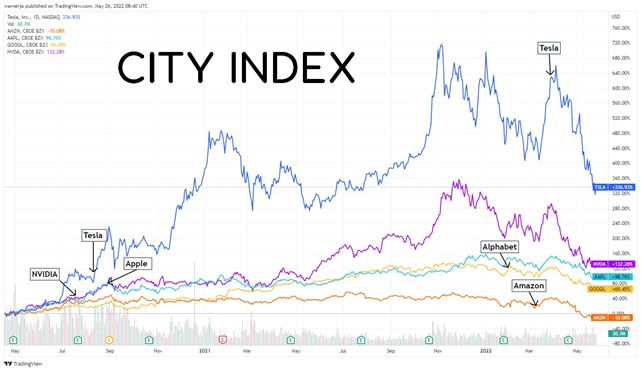 One of the reasons stock splits have grown in popularity is because of the explosion in value that Big Tech has experienced in recent years, before the selloff began in 2022. For example, Apple shares had risen from below $40 to over $124 in the three years before it launched its last stock split, while NVIDIA’s share price more than doubled in the same timeframe before its own announcement back in July 2020.

Research from Bank of America suggests stock splits have historically been bullish for companies that complete them and that they tend to outperform the wider market during the 12 months after the split has happened:

Although stock splits have proven to be a boon for share prices in the past, they do not influence the overall valuation of the company or change the underlying investment case of the business. They add zero value and make no difference to how the business performs. This has led some criticism that stock splits can unduly inflate share prices by simply enticing more retail investors in. Tesla still trades at a much larger valuation ratio compared to its peers and a stock split won’t change that.

How to trade the Tesla stock split

Stock splits have proven to be broadly supportive for those that have completed them in the past, and Tesla investors are hoping this one will have the same effect as the last one completed in 2020. The hope is that the stock split makes Tesla shares more accessible to retail traders, which in turn should bring more liquidity into the market and provide support to the stock. However, the dramatic fall in Tesla and shares of other members of Big Tech since the stock split was announced in late March shows the environment is very different this time around.

Tesla shares have outperformed the wider market over the past two years, but that has meant the stock has experienced a much steeper fall than others since the selloff began in 2022. That has reduced the need for Tesla to conduct a stock split, although it could still make the stock more accessible by completing one at current levels.

You can speculate how the stock split will impact Tesla shares with City Index in just four easy steps: