Aston Martin said it remains on track to improve profitability this year as part of its turnaround programme after the luxury carmaker reported a strong recovery in sales and significantly narrower losses in the first quarter.

The company said revenue jumped to £224.4 million in the period compared to only £88.8 million the year before. That beat analyst expectations for revenue of £196.7 million, according to Bloomberg.

That was the result of a significant jump in wholesale volumes to 1,353 cars from just 578 the year before. Aston Martin said volumes surged higher thanks to greater demand, with the DBX – its first-ever SUV that was launched in July 2020 - now accounting for 55% of all unit sales. Revenue also benefited from higher prices after the company rebalanced the number of cars sold in dealerships.

‘I am pleased with our performance in the first three months of the year, delivering results in-line with our expectations of good growth and progress on the path to improved profitability and cash generation. Dealer inventory for GT/Sport is now at our ideal levels, earlier than originally planned and supporting stronger pricing dynamics. We are encouraged by the growth in orders for both GT/Sport and DBX, providing good visibility,’ said chief executive Tobias Moers.

Aston Martin has had a tough time since going public in 2018 and has been undergoing a restructuring led by a new management team over the past year.

The adjusted loss before interest, tax, depreciation and amortisation of £15.3 million was considerably smaller than the £67.9 million loss reported the year before. The loss before tax also narrowed to £42.2 million from £110.1 million.

Aston Martin reiterated its guidance for the rest of the year. It is aiming to deliver 6,000 wholesale units and deliver an adjusted Ebitda margin within a ‘mid teens’ percentage – with this metric to be heavily weighted to the second half when new specials are released.

‘I am delighted with the great progress we are making as demonstrated by the results we are reporting today which mark the first steps towards achieving our medium-term targets. Our new team is assembled and focused on executing our exciting plans. My co-investors and I are very confident in the future success and potential for Aston Martin as we transform the company to be one of the greatest luxury car brands in the world,’ said executive chairman Lawrence Stroll.

Aston Martin is aiming to deliver 10,000 wholesale units each year over the medium-term to generate £2 billion in annual revenue and £500 million worth of annual adjusted Ebitda.

Aston Martin has been trending lower since early February finding support at 1800p.

Despite a 3% jump high this morning, the Aston Martin share price trades below its descending trendline dating back to February.

It is attempting to break above 1950p its slightly downward sloping 20 & 50 EMA. It would take a move above 2050p for the bulls to gain traction and target 2200p

Meanwhile a break below 1800 is needed for a deeper selloff. 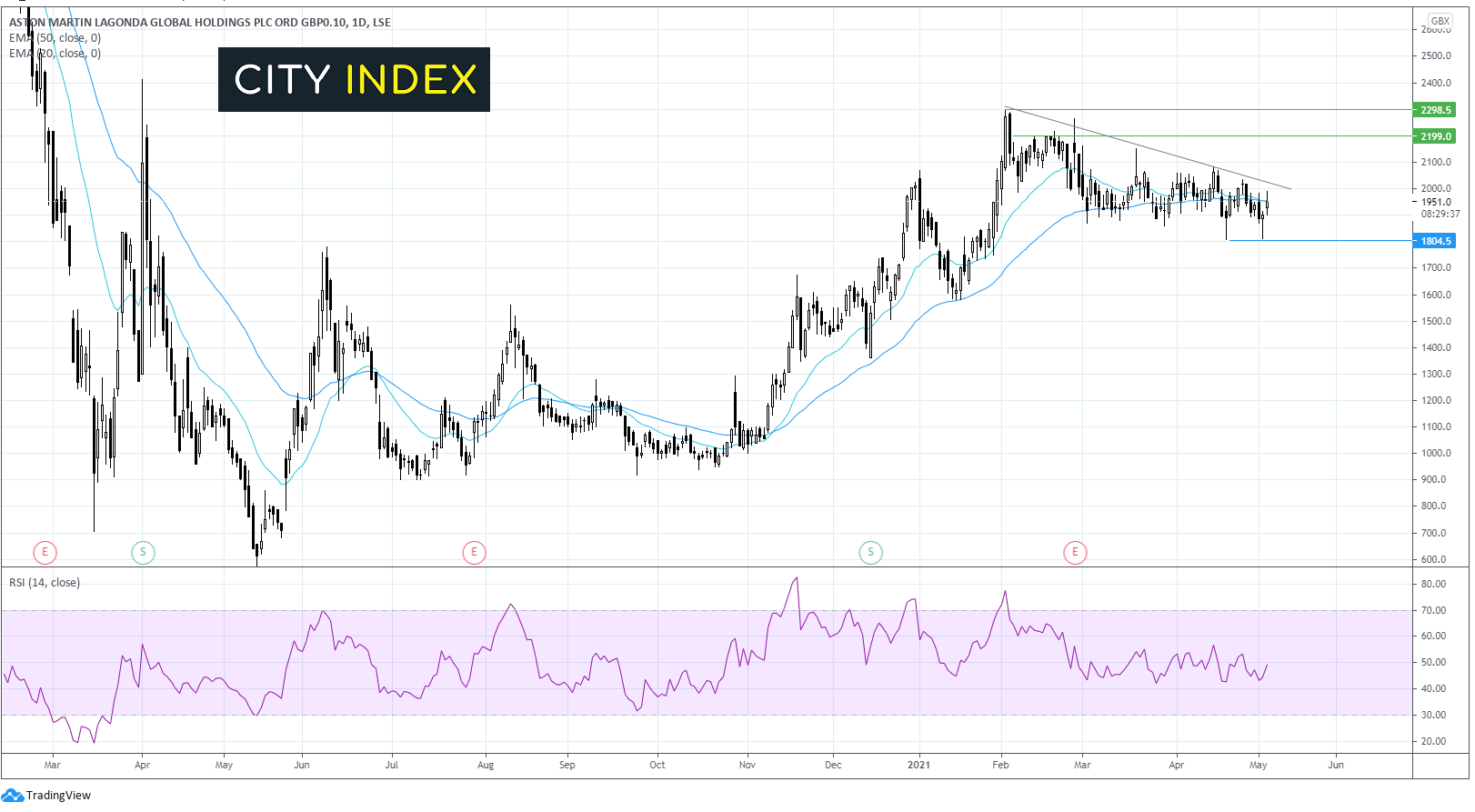 Next ups guidance after strong start but warns of slower growth

Next said it performed much better than expected during the initial weeks of its new financial year, prompting it to bump up its profit guidance, but said it doesn’t expect the spike in demand to continue for long.

The clothing and homewares retailer said full price sales were down 1.5% in the 13 weeks to the start of May compared to two years ago before the pandemic hit. That was considerably better than the 10% decline forecast by the company and meant it booked an extra £75 million more in sales than expected.

The additional sales prompted Next to bump up its annual pretax profit guidance by £20 million to £720 million. That would be a significant improvement from the £342 million delivered in the last financial year as business was severely disrupted by the pandemic but also in-line with the £728.5 million delivered the year before, prior to the crisis.

A strong performance online has been the driver behind Next’s resilient performance, with stores only having reopened last month. Online sales grew 65% in the 13-week period while retail sales were down 76%.

Next said it had seen strong sales growth in its stores during the last three weeks of the period during which they were open, but said this was due to ‘pent up demand’ and that it doesn’t expect it to continue throughout the rest of the year.

The reopening of stores should drive overall growth going forward if online can keep up the momentum. Next said overall full price sales grew by 19% in the last three weeks of the period when stores were open, and online sales still jumped over 50% despite the high street adding more competition.

‘Evidence from last year suggests that this post lockdown surge will be short lived, and we expect sales to settle back down to our guidance levels within the next few weeks.  We are therefore maintaining our sales guidance for full price sales for the rest of the year to be up +3% versus 2019.  Within this guidance, we have maintained the assumption that Retail will be down -20% and Online will be up +24%,’ said Next.

Barratt Developments said it expects to build more houses this year than previously expected after seeing strong demand for homes.

The upgrade came as Barratt has seen its net private reservation inch up to 0.83 since the start of 2021 compared to just 0.52 the year before and 0.79 in 2019. It said the overall reservation rate has jumped 60% from last year, when numbers were depressed as sites were closed by initial lockdown.

It has forward sales for 14,846 homes, giving it a healthy pipeline to work with. It is now completely forward-sold for the current and next financial year.

‘We remain focused on our medium-term targets. Firstly rebuilding total home completions in FY22 to FY19 levels and then progressing towards our medium term target and current capacity of 20,000 homes. In order to do this, we are investing in work in progress and seeking to increase site numbers to support growth. We have acquired land in recent years at a minimum 23% gross margin and through our continued focus on operating efficiencies and optimising performance, we continue to target a minimum 25% ROCE,’ said Barratt.

Melrose Industries said the momentum seen in the second-half of 2020 has continued into 2021 and allowed it to perform better than anticipated since the start of the year.

The company, which buys struggling manufacturing businesses to turn their fortunes around, said sales were up 8% between the start of January and the end of April. Nortek Air Management was a major contributor with sales up 28%. Excluding Nortek, overall sales were up 4%.

The Aerospace division continued to struggle as demand continues to suffer during the pandemic, with sales down 27%. However, Melrose said the division was profitable in the period despite catering to a similar level of demand as last year when it booked a loss – demonstrating its cost-savings are delivering rewards.

The Automotive division is also facing problems due to the global shortage in semiconductor chips. Sales were 28% higher in the period compared to the year before when the pandemic knocked demand for cars, but still remained 13% below pre-pandemic levels.

Powder Metallurgy saw sales rise 35% from last year but also came in 1% ahead of pre-pandemic levels in 2019, while margins have ‘significantly improved’ from last year.

‘The operating margins achieved in the first quarter of the year continued to improve faster than expected and cash generation for the group is encouraging, with Melrose being cash neutral in the first quarter, in what is traditionally a cash outflow period,’ said Melrose.

‘The Melrose board is encouraged by the start to the year and expects the improvements will continue, albeit the growth rate will be impacted to a degree by the well publicised supply issues on semi-conductors in the global automotive supply chain,’ it added.

Trainline said sales plunged and revealed it was pushed into the red during its recently-ended financial year after the pandemic and lockdown rules decimated demand for train travel and commuting.

Trainline has focused on cutting costs and improving liquidity during the year and is focused on capitalising on the recovery opportunities as the economy reopens. Trainline now accounts for 70% of all e-tickets bought in the UK and it has added a number of new features like in-app railcards and location services.

It said UK net ticket sales were up in the first quarter of this year and that it is well placed to lead the shift to digital ticketing as conditions improve.

‘Last year was clearly very challenging for the industry. However, as we enter FY2022 we are seeing the first signs of recovery, with net ticket sales increasing as lockdowns ease and as non-essential travel returns, particularly in the UK,’ said chief executive Jody Ford.

‘Our continued investment in product and tech through COVID-19 means, despite the ongoing COVID-19 uncertainty, we are well positioned to support the wider industry recovery and continue driving the market shift to online and mobile tickets. We are keeping our foot on the accelerator, improving the customer experience and launching new products across our markets. Our focus includes developing innovative, bespoke features to serve the needs of the new commuter in the UK, and harnessing growing competition amongst rail operators in Europe by combining all carriers into one app to position Trainline as the marketplace of choice,’ Ford added.

Trainline shares were trading 2.2% lower in early trade this morning at 442.1.

You can trade a wide variety of UK stocks with City Index. Follow these easy steps to start trading the opportunities with UK stocks.