Stocks Dive As Optimism Of US Sino Trade Deal Fades

By :
Fiona Cincotta
,  Market Analyst
The selloff in global stocks continued on Thursday amid growing fears of an escalation in the US – Sino trade dispute. As the clock ticked down to the deadline for US and China to raise reciprocal tariffs, indices across Europe plummeted.

Fear and risk aversion are driving a sharp selloff in equities. The big concern for investors is what impact will the increased tariffs and prolonged trade dispute have on the global economy? Just as we are starting to see tentative signs of global growth stabilising, Trump’s actions could put that into reverse. Should the tariff increase take place, the current selloff in equities could continue.


Indices across Europe and the US shed  1%+.  The FTSE was holding up better than its European counterparts, down 0.5% thanks in part to the weaker pound and buoyant housebuilders, one of the few sectors to advance on Thursday.


Housebulders rally as house prices jump in April
House builders dominated the upper reaches of the FTSE after the Halifax housing index showed that UK house prices for April posted the biggest jump for two years. House prices were up an impressive 5% year on year in the three months to April, better than the 4.5% increase forecast and an improvement on the 2.6% increase recorded in March.


Pound falls below $1.30
After an early move higher, the pound proved unable to keep its head above the key psychological level of $1.30 as it came under selling pressure for the fourth straight session. Losses this week versus the dollar are nearing 1.5%. Pound traders are clearly not convinced that Theresa May bringing her Brexit Agreement back to Parliament for a fourth vote, in a desperate bid to avoid European Parliamentary elections will be successful. 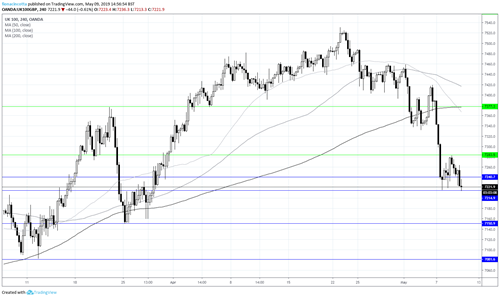