Over the last week, we’ve written about the early signs of a potential bottom forming in AUD/USD, but we haven’t taken a close look at the Aussie’s antipodean brother NZD/USD, even though the kiwi appears to be a few days ahead.

Of course, any time you’re looking at one of the “commodity dollars” (Canadian, Australia, and New Zealand dollars), you have to look at the performance of the key commodity of late (oil, ore/other metals, and dairy, respectively). When it comes to the kiwi and dairy, the news has actually been fairly upbeat; the last two biweekly Global Dairy Trade (GDT) auctions have shown rising dairy prices after a streak of three straight price declines through October and November. The next auction won’t take place until January 5th, but kiwi traders are starting to wonder whether the worst of the price action in dairy may be behind us.

This more optimistic view is reflected in the chart, where NZD/USD has been rising within a bullish channel for the past six weeks and is now within 30 pips of its 6-month high at .6900. Perhaps more significantly, rates have broken above the widely-watched 200-day MA for the first time since August 2014, increasing the odds that the long-term trend has now shifted back to the topside.

The secondary indicators bolster the bullish view: the MACD is trending gradually higher above both its signal line and the “0” level, while the RSI has been in a bullish trend of its own over the last six months. With the RSI not even in overbought territory, we could see buyers to push NZD/USD through previous resistance at .6900 and test the long-term 50% retracement around the .7000 handle in short order. Even if we do get a dip over the next few days, the short-term bullish bias will remain intact as long as rates hold rising channel support at .6750. 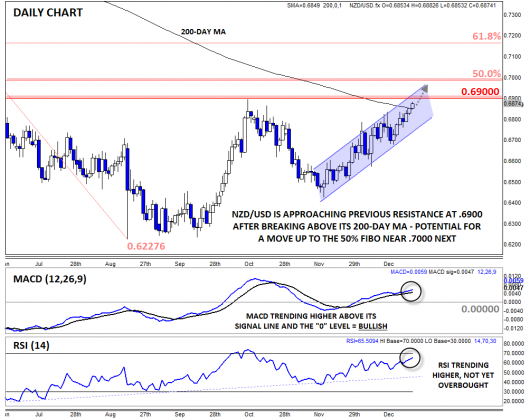 RBNZ preview and what comes next for the NZDUSD?
By:
Tony Sycamore

NZ employment report preview and what next for the NZDUSD
By:
Tony Sycamore

NZ CPI hits a 32-year high, but is it enough for an imminent hike?
By:
Matt Simpson