Walmart beats estimates. What it means for Target?

Walmart (WMT) earnings took the markets by surprise today as the Big Box retailer reported earnings of $1.77 per share vs $1.62 per share estimated. In addition, WMT said its revenue grew by 8.4% to $152.9 billion vs estimated growth of only 7% to $150.9 billion.  Recall that on July 26th, WMT said that operating profit could slump as much as 13% in 2022 as big-ticket items sat in inventory for longer than expected.  (This was after the previous warning on May 17th.) The company said they now have a handle on inventory as it “canceled billions of dollars in orders to help align inventory levels with expected demand”. The company also reaffirmed its guidance for the remained of 2022.  See our complete preview of earnings releases this week here.

Everything you need to know about earnings season 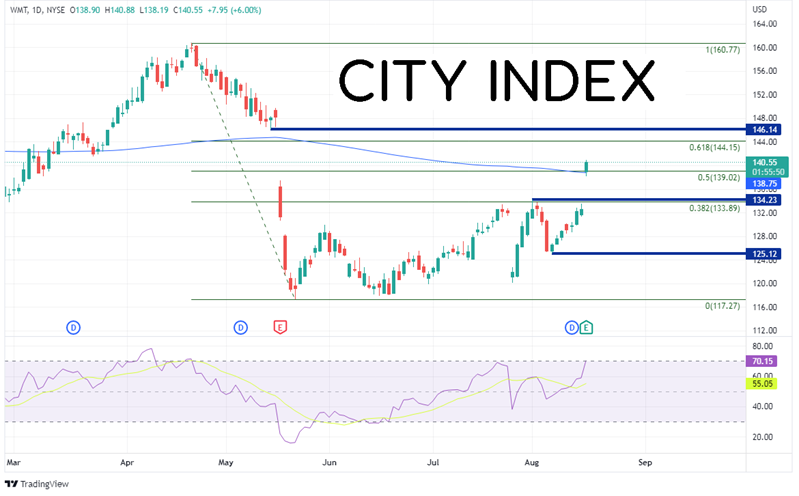 Target (TGT) is due to report earnings tomorrow.  Like that of Walmart, Target has had inventory problems of its own, as consumers sat on the sidelines and inventories built.  Target released a similar warning for Q2, mainly that its operating margin would be around 2% for Q2 vs 2.4% estimated. Analysts are expecting adjusted EPS to fall over 80% to $0.72, while the company has estimated low to mid-single digit revenue growth in 2022.  However, with today’s earnings beat by Walmart, traders are hoping for a similar outcome tomorrow for Target’s earnings.

Target made an all-time high on November 15th, 2021 at 268.98.  Price then pulled back and made a lower high on April 21st at 254.87 (the same date that WMT made its all-time high).  After Walmart’s profit warning on May 17th,  Target fell to a low of 137.16.  The stock then began trending higher and after Walmart’s earnings release, it gapped to the 38.2% Fibonacci retracement level from the highs of April 21st to the lows of June 30th, near 182.11.  The stock price is up over 5.25% today!  If earnings beat estimates, will the stock continue higher, or will it sell off on a “buy the rumor, sell the fact” type of trade.  The first resistance level is at the 50% retracement from the previously mentioned timeframe near 196.02.  Above there is a strong band of resistance, comprised of the 200 Day Moving Average, the gap fill from May 17th, and the 61.8% Fibonacci retracement level, between 205.32 and 209.90.  However, notice the RSI is in overbought territory, indicating the stock price may be ready to pull back.  First support is at today’s gap fill near 174.16.  Below there, price can fall to horizontal support at 160.79, then the lows from July 26th at 149.50. 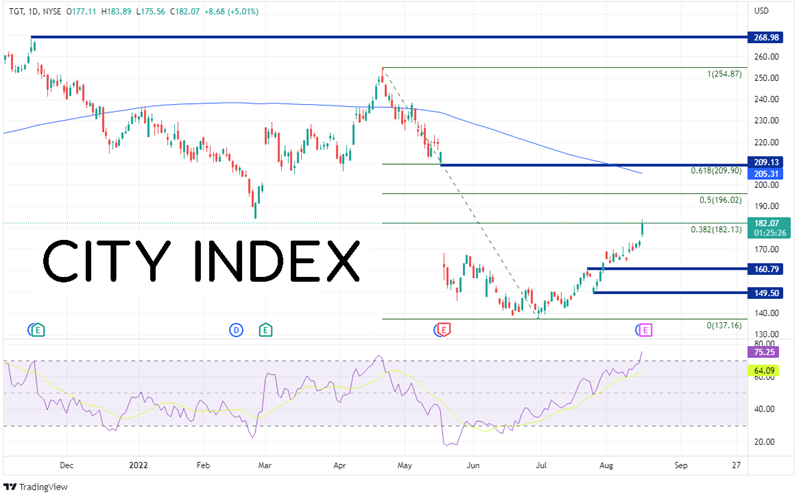 Walmart earnings beat estimates that had been revised lower throughout Q2.  As a result, the price of the stock gapped 5% higher.  Target reports tomorrow, and traders are hoping for the same type of outcome as Walmart.  As a result, Target’s stock price is also up over 5%.  However, keep an eye on tomorrow’s earnings release!  Be on the lookout for a “buy the rumor, sell the fact” trade!