Top News: Next ups expectations as it prepares to reopen stores

Next said revenue and profits both plunged during the pandemic as lockdown kept stores closed for most of the year, but said it is hoping to bounce back strongly as it prepares to reopen stores later this month.

The fashion and homeware retailer has been hard hit by the pandemic but has been more resilient than many of its high street neighbours thanks to its strong online offering. Still, the tough conditions saw full price sales plunge 15% year-on-year to £3.6 billion from £4.4 billion in the 12 months to the end of January, while pretax profits plummeted to £342 million from £729 million.

The decline in sales during the year was slightly milder than expected while profit was in line with Next’s guidance provided in January.

Next said it expects full price sales in the new financial year to be flat with pre-pandemic levels seen in the 2019/20 financial year. However, it is now expecting profit to come in at £700 million rather than its previous target of £670 million. This will be driven by a stronger than expected performance online, with digital sales rising 60% year-on-year during the first eight weeks of the new financial year.

The old target was based on Next stores being opened at the end of March but, with stores set to reopen on April 12, there was a risk that guidance was going to be lowered this morning to reflect the later opening date. However, Next said this was going to be offset by the extension to business rates relief.

Next significantly reduced its debt pile despite a tough 12 months, ending January with net debt of £61 million compared to £1.1 billion a year earlier. However, dividends remain off the table for now after being suspended when the pandemic erupted, but Next said it remains ‘committed to returning capital to shareholders in the long term and will review our position later in the year when we have better visibility of our trade once our stores reopen.’

Next has been trending higher since its mid-March lows. It trades above its 20 & 50 sma on the daily chart and above its 12 month ascending trendline, indicating an established bullish trend.

The RSI is also supportive of further gains as it sits above 50 but below overbought territory.

The price is attempting to break above the previous all time high of 8180. A meaningful close above this level could see Next bulls continue pushing towards 8300 round number and on to 8500.

On the flip side, failure to find acceptance at this price could see Next share price fall back towards 7770, the confluence of the 20 & 50 sma before testing the ascending trendline support at 7600. A fall below this level could negate the current uptrend. It would take a move below 7300 for the selloff to gain traction. 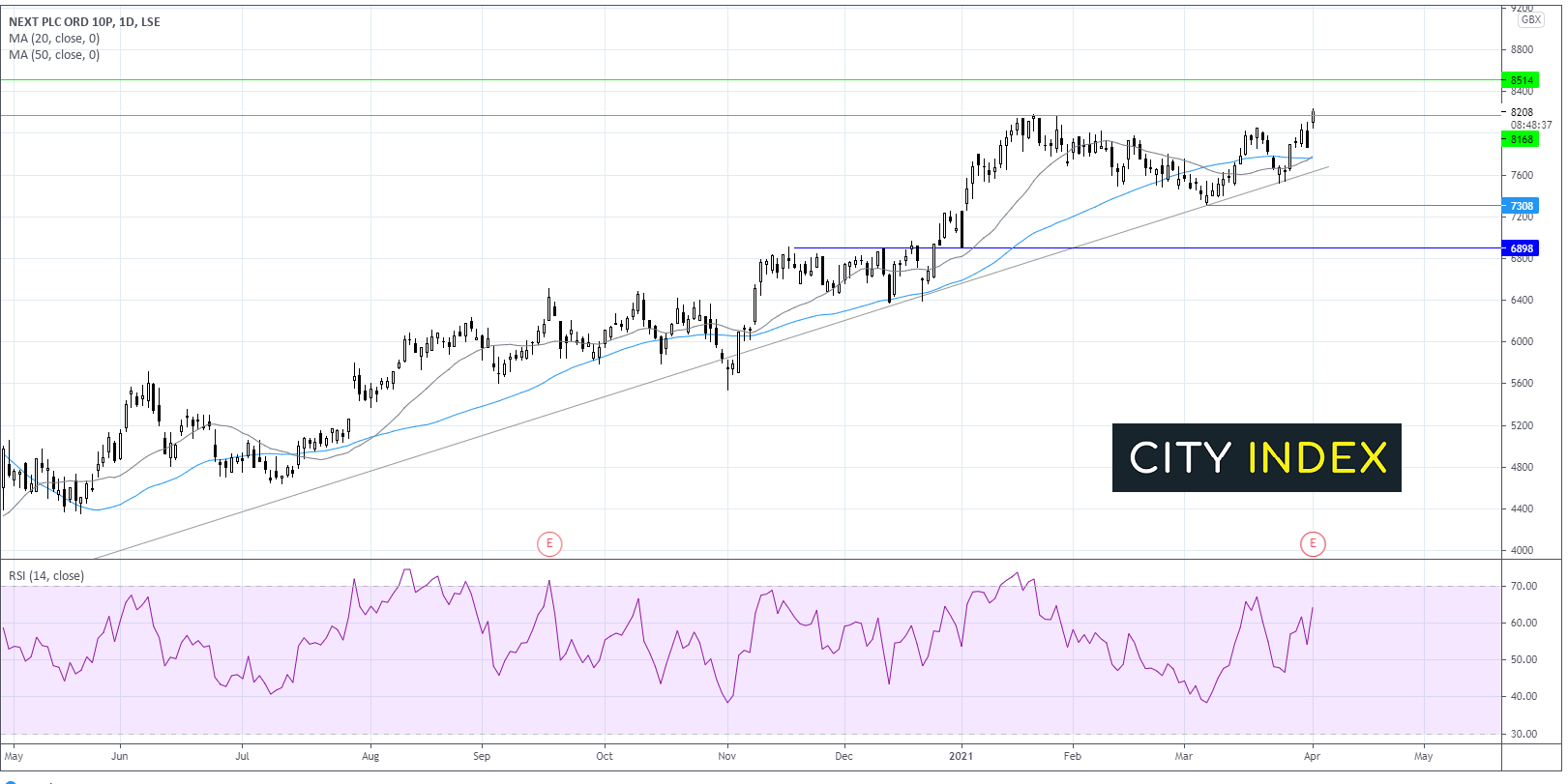 Quilter has agreed to offload its international operations to Utmost Group for a total of £483 million as part of plans to simplify the business and make it a UK-focused wealth manager, and said it is considering returning the majority of the proceeds to shareholders.

The sale comes after the Quilter board conducted a strategic review of the business. The deal is expected to close around the end of 2021 and is conditional on the backing of Quilter shareholders and regulatory approvals. The price tag includes a 5% interest charge from a base value of £460 million and assumes completion on the last day of the year.

The deal will inject around £450 million in net proceeds into the business. Some of this will be used to cover the contribution toward this year’s dividend that would come from the international arm. Quilter said it was ‘currently minded to undertake a capital distribution to shareholders of the majority of the net cash proceeds’ but said it will make a final decision after the deal is completed and once it has evaluated whether it could use the funds for any other opportunities.

Quilter will be focused on accelerating growth in its UK wealth management business after the disposal. It said it is now targeting to generate annualised net client cash flow growth of at least 6% from 2022 compared to its previous target of 5%, partly because it won’t be dragged down by the slower-growing international arm.

The business is aiming to deliver an operating margin of 25% in 2023 and at least 30% in 2025, with some of the disposal proceeds being used to accelerate growth, cut costs and optimise its operations.

Quilter will provide a further update on its UK strategy, along with posting new financial targets, in the fourth quarter of 2021.

Airtel Africa provides telecommunications services and runs a mobile money business across Africa, providing financial services like deposit and withdrawals to people in 14 countries where traditional banking infrastructure is lacking.

Mastercard’s $100 million investment values Airtel Africa’s mobile money business at $2.65 billion. Based on the performance of the mobile money business in the third quarter of 2020, it generates around $440 million in annual revenue and $216 million of earnings before interest, tax, depreciation and amortisation, and continues to grow at pace with transaction value up 53% in the latest quarter.

Mastercard is the latest big name to back Airtel Africa after the London-listed business struck major partnerships with the likes of Samsung, Standard Chartered and MoneyGram over the past year.

Airtel Africa said it is still planning to spin-off its mobile money business with a listing within the next four years.

‘With today's announcement we are pleased to welcome Mastercard as an investor in our mobile money business, joining The Rise Fund which we announced two weeks ago. This is a continuation of our strategy to increase the minority shareholding in our mobile money business with the further intention to list this business within four years,’ said chief executive Raghunath Mandava.

Entain said it is now operating in 27 regulated markets after completing the acquisition of European firms Bet.pt and Enlabs, and will continue to expand into other countries that are introducing new gambling and betting legislation over the coming years.

The online bookmaker started 2020 operating in just 21 fully-regulated markets but has since entered new countries like Germany, Portugal, the Baltics and Colombia.

‘Looking ahead, the group expects to increase further the number of regulated markets in which it operates through a combination of positive regulatory developments in certain jurisdictions, like Canada, and expansion into new countries in regions including Latin America and Central and Eastern Europe,’ said Entain.

Entain said last year that it would only operate in countries that had introduced comprehensive regulation for sport-betting and gaming markets or were in the process of introducing it.

3i Infrastructure has agreed to acquire a 60% stake in German telecommunications firm DNS:NET for EUR182 million.

The infrastructure investment firm is purchasing the stake from Deutsche Beteiligungs and the deal should be completed in June. Alexander Lucke, the founder and chief executive of DNS:NET, will be the majority holder of the other 40% stake.

It has already started rolling out fibre-to-home, which will accelerate using the new investment from 3i Infrastructure, and expects rapid growth in demand as more people look for faster connections for everything from working from home to online gaming. Only 14% of Germany is covered by fibre-to-home compared to an average of 33% in wider Europe but the German government aims to have nationwide access by 2025.

‘DNS:NET is an asset-intensive business delivering an essential service in a sector with strong underlying demand trends.  It is a high growth asset which will further diversify our portfolio, giving 3i Infrastructure sizeable exposure to the German infrastructure market for the first time,’ said Richard Laing, chairman of 3i Infrastructure.