European stock markets have outperformed so far this year, with the euro also showing relative strength. Investors have been pricing out risks that had been associated with EU markets, including a sharp recession in the eurozone and rationing of gas. But thanks to a mild winter so far, an energy crisis has been averted. Meanwhile economic data has not been as bad as feared. In addition, China’s re-opening has boosted hopes over Eurozone exports, especially given the big drop in shipping costs.

The euro has been further supported by hawkish comments from the ECB President Christine Lagarde who in December said the market should be expecting the central bank to raise interest rates at a 50 basis-point pace “for a period of time.”

The euro thus remains supported for now, especially against currencies where the central bank is deemed to be slightly more dovish than the ECB – among others, the pound and yen. But even against other major currencies, we could see the single currency start to appreciate from here.

The EUR/GBP has risen as investors expect the gap between monetary policies in the UK and Eurozone to narrow and given the above developments. A break above 0.8870 resistance level could pave the way for a move towards 0.90 handle next, where we also have the 61.8% Fib level converging. 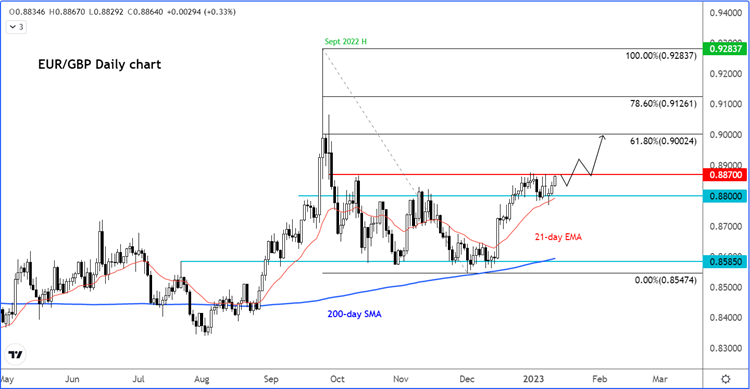 The EUR/CHF has been stuck inside a very narrow since mid-November with 0.9900-0.9910 area offering consistent resistance. Until today. As a result of the recent consolidation, last year’s downward momentum has completely been lost. The 21-day exponential average has started to point higher and the 200-day average, which is still pointing lower, was now being tested from underneath. Given that the ECB has remained hawkish and European data has improved a little, with an energy crisis not materialising, some of the downside risks for the euro has diminished. So, this bullish breakout could hold, and if it does, we might see a strong recovery in this pair. 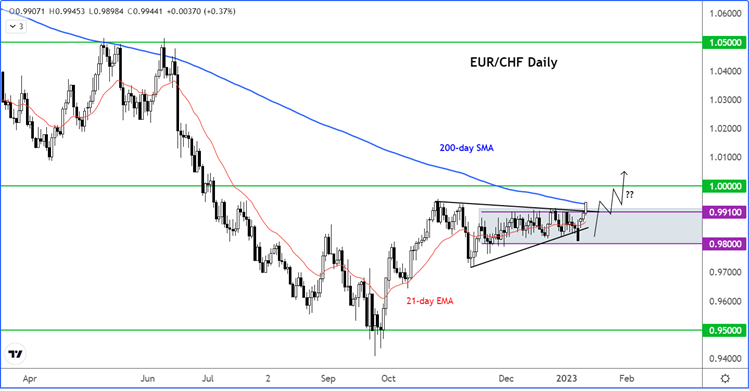 The EUR/JPY has been creeping higher in recent days after reclaiming the 200-day simple average and 21-day exponential average. Price has risen above 142.00 resistance in another bullish development. For confirmation we now need to see a higher high above 142.95 now. 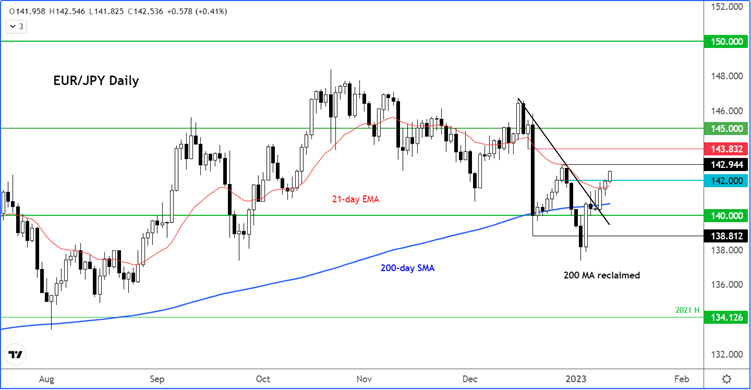 The EUR/NZD pair is looking increasingly bullish as it continues to hold above the 21-day exponential average. A breakout from the triangle patter looks likely, with the bulls eying a move north of 1.70 now that 1.6900 has been reclaimed. 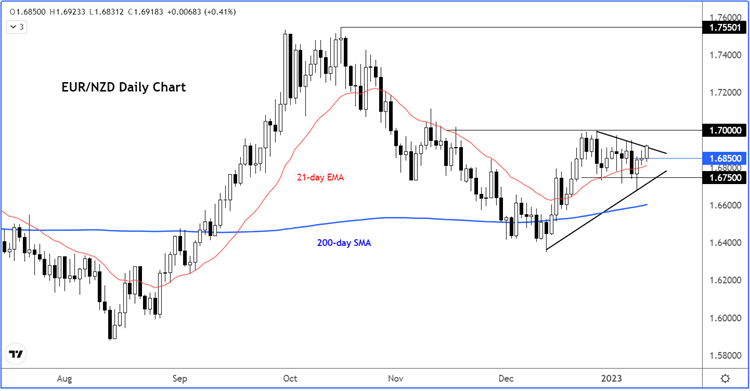