The Czech National Bank left rates unchanged earlier today at 7%.  Some analysts saw a chance of a hike by as much as 50bps, as the central bank has tightened rates by 675bps since June 2021.  In addition, the Czech National Bank said that it would use all available tools to contain excess volatility in the Koruna. The June CPI, released on July 13th, showed that inflation increased to its highest reading since December 1993 at 17.2% YoY as food and energy prices continued to rise!  The July CPI for the Czech Republic will be released next week. However, the preliminary Q2 GDP fell to 0.2% from 0.9% in Q1, though analysts were expecting a reading of -0.4%.

The USD/CZK has been moving higher in an ascending wedge pattern since mid-February, when Russia began building up troops on the Ukraine border.  On the day of the invasion, USD/CZK rose over 2%,  Over the course of the next 6 days, the emerging market pair moved from a low of 21.9563 to a high of 23.9246, an increase of nearly 9.3%.  Price held just below horizontal resistance at the highs from June 2020 near 23.9981.  The pair then pulled back, but began making higher highs and higher lows, forming an ascending wedge. On July 12th, USD/CZK reached its highest level since the week of May 25th, 2020, as the pair ran into additional horizontal resistance. USD/CZK is currently trading near the 61.8% Fibonacci retracement level from the highs of March 2020 to the lows of May 25th, 2021, near 24.0297.  Notice how price made 3 higher highs as the RSI made 3 lower highs, just as we saw with AUD/NZD. This is a sign that USD/CZK may be ready for a pullback. 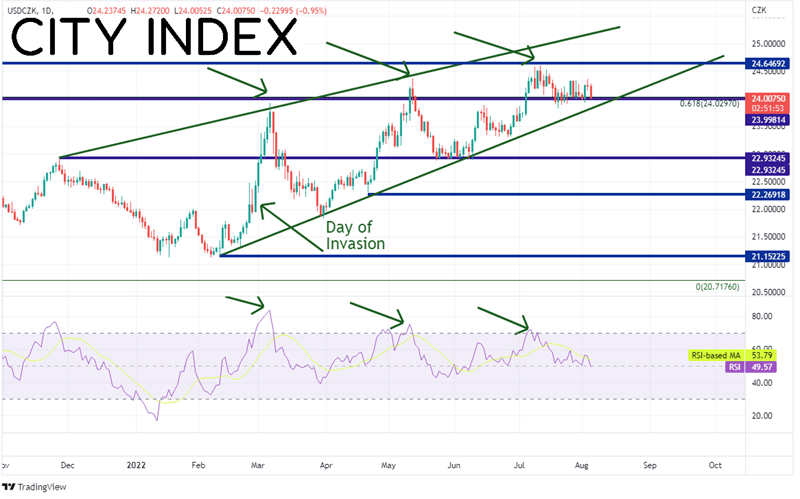 Expectations are that price will break lower out of an ascending wedge.  The target for the pattern is a 100% retracement, which in this case is near 21.1523.  However, if price is to get there, it will first have to pass through the bottom trendline of the ascending wedge near 23.8100 and then horizontal support at 22.9325 and 22.2692. However, if USD/CZK is just pulling back in an uptrend, the first level of resistance is at the highs from July 12th and prior resistance near 24.6469. If price continues higher, the next resistance level is at the top trendline of the pattern, near 25.2000.

The Czech National Bank left rates unchanged at 7% today, despite the latest inflation reading of 17.2% YoY.  Will the USD/CZK continue to move higher?  It could, however it may have to wait until after the July inflation reading next week.  And don’t forget about the ascending wedge and the price/RSI pattern.  If price breaks below the bottom trendline of the wedge, it could retracement 100% of the move!