Here’s a quick cheat sheet on the economic data that you might want to pay attention to as part of your macro fundamental analysis.

Why economic indicators are important to traders

As we covered in the last lesson, central banks will use economic data when deciding where to go next with interest rates. So, traders will watch the same releases and adapt their positions to get ahead of the markets before the next central bank meeting.

As with central bank meetings, consensus is a key theme here. Analysts will predict the outcome of most major releases well ahead of time, which means they’re usually priced into the markets before the actual data lands. If the eventual figure is a major miss or beat relative to expectations, though, expect volatility – particularly in currencies. 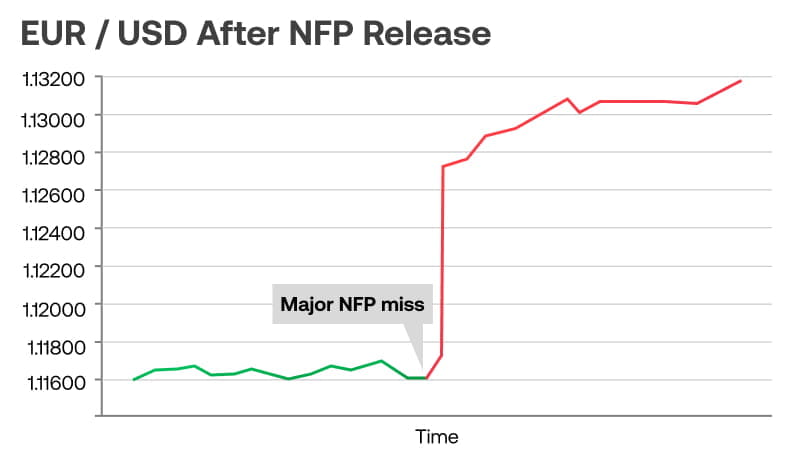 So, without further ado, here are the top events that can move markets.

Did you know? You can track all of the releases covered here – and much more – using City Index’s economic calendar.

Gross domestic product (GDP) measures the total economic output of a region and is the main way of calculating the size of an economy. Most government agencies will report on GDP growth on a quarterly basis, calculating whether it has grown or shrunk from the previous figure.

GDP change is usually expressed as a percentage. If it falls for two consecutive quarters, then you have a recession.

In the UK, GDP data is reported by the Office for National Statistics (ONS). In the US, it’s the Bureau of Economic Analysis (BEA).

As we’ve seen, central banks generally want to promote economic growth – but they want to avoid the runaway growth that can cause long-term damage. Generally, an annualised GDP growth rate of around 2%-3% is seen as a healthy target in developed countries.

If GDP comes in below that level, then we might see a drop in rates to boost the economy. If GDP is rising faster than 3%, then we could see a rate rise to ward off inflation.

Inflation occurs when the value of a currency falls, making goods and services more expensive. It’s a natural side effect of economic growth, and steady inflation is usually targeted as party of a healthy economy. The Bank of England, for example, has an inflation target of 2%.

A little inflation might be a good thing, but high inflation – or even worse, hyperinflation – can wreak havoc on an economy.

Because of this, inflation figures can often be a primary driver of changes to monetary policy. High inflation can lead to a swift rate rise, low inflation may see a rate cut to boost the economy.

The Consumer Price Index is the main measure of inflation in an economy, tracking the prices of a group of goods and services. When prices rise, inflation is on the cards; if they fall then inflation is falling too (known as deflation).

Different organisations calculate the CPI for different economies, and the basket of goods they measure isn’t always the same. In the UK, it’s the job of the ONS. In the US, it’s the Bureau of Labor Statistics (BLS).

Alongside CPI, you’ll often also see a Producer Price Index (PPI) quoted. This works in a similar way to CPI, but instead of measuring the cost of purchasing goods for consumers, it tracks how much producers' costs are changing.

The last of the ‘big three’ economic releases that will move markets are reports on employment levels. Central banks often have the mandate of promoting high employment – if jobs figures are coming in too low, then they may be forced to act by lowering rates.

Like GDP and inflation, different agencies around the world will report their own employment figures. But there’s one release that stands out above all the others: non-farm payrolls (NFP).

What is nonfarm payrolls?

Nonfarm payrolls is a monthly report that calculates the number of workers in the US. It generally lands on the first Friday of each month and excludes those working in farms (hence the name), private households, non-profit organisations and some sections of government.

NFP is known as a key driver of market movement, especially in the forex market. If the NFP figure comes in below expectations, then USD could fall, causing pairs like EUR/USD to rise. If the opposite happens, then USD can spike, causing EUR/USD to fall.

Those are the major headline releases to watch out for, but there are lots of other events that can cause volatility. These can include:

Should you trade key releases

Whether you choose to trade off the back of the releases we’ve covered here is up to you. While they can be hugely popular – particularly among FX traders – the higher volatility means some choose to stay away from the markets entirely when data is released.

If you do choose to take part, then a solid stop-loss strategy is crucial. And due to the higher chance of gapping and slippage, guaranteed stop loss orders (GSLOs) are recommended.

It’s also worth noting that your chosen markets won’t always react in the way you might expect. An unexpectedly low NFP figure should send EUR/USD flying – but that won’t necessarily mean it does. And even when EUR/USD rises, it can often see a sizable counter move beforehand.

So caution is advised.

Question {0} of {1}
UK GDP comes in at a negative, when the consensus was for a much higher figure. What might happen to EUR/GBP?
Correct Incorrect Try again Next question
Question {0} of {1}
Canada surprises the markets with a low inflation figure. What might happen to USD/CAD?
Correct Incorrect Try again Next question
Completed
Well done, lesson completed! Take the quiz again or move to the next lesson.
Take the quiz again
Next question Try again