What is fundamental analysis?

Fundamental analysis involves taking lots of factors that could influence an asset’s price into account, instead of just looking at its price. In this course, we’re going to cover how to get started with fundamental analysis on stocks, commodities and more.

Fundamental analysis is a method of researching opportunities that aims to build up a cohesive picture of all the factors that might affect an asset’s price. Unlike technical analysis, which looks purely at price action and trends, fundamental analysis takes on a much more rigorous assessment.

While often associated with stocks, you can apply fundamental analysis to any market.

In forex, for example, fundamental analysts look at key elements that are likely to have a bearing on the strength or weakness of a particular currency, such as economic data, political factors and even the impact of natural disasters.

These factors are referred to as fundamentals. Hence the name, fundamental analysis.

How does fundamental analysis work?

Fundamental analysis is based on the idea that each asset has a fair value – and that while the markets may temporarily overprice or underprice an asset, eventually its price should normalise to that fair value.

Say, for instance, that you’re buying a house. You could decide to make the purchase on expectations that its price might rise in value because it is in a high-growth area.

A fundamental analyst, however, would look at the house’s foundations, insulation, history, previous tenants, the surrounding schools, nearby shopping centres and scope for improvements in the surrounding area.

They’d decide how much they think the house is worth today, and how much it might be worth in the future. If the asking price of the house is below those figures, they might decide to buy in the expectation that its value would rise to match their prediction. 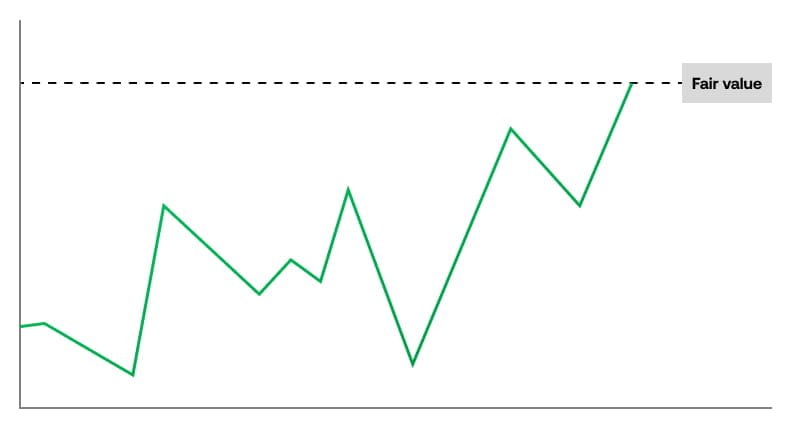 As with any means of finding trades, fundamental analysis isn’t bulletproof. Here, the chief issue is that your chosen market might never actually reach the fair value you’ve assigned to it.

You might buy a stock because you expect new government regulations to boost its bottom line in the coming years, but see your investment derailed by a change of leadership before that can happen. Or, you might spot that an index is overinflated and open a short to profit from the crash – only to discover that markets can remain irrational for far longer than you’d planned.

Risk management is crucial to all forms of trading, and fundamental analysis is no different.

How to use fundamentals analysis

At this point, fundamental analysis can seem a little bit daunting. There are potentially unlimited factors that could move the markets, making it tricky to decide where to look first.

For most fundamental analysts, the answer is to take a top-down approach. You start out by examining the wider environment that an asset exists in, paying particular attention to economic data and reports such as unemployment and GDP data, interest rate announcements and production data to evaluate an overall economy.

For forex traders, that’s often enough – after all, a currency’s value is a reflection of its economy.

But if you’re trading other markets (such as stocks or commodities), you’ll then take a closer look at the asset itself. For stocks, you might start out by examining the company’s sector, before turning to earnings reports to examine the stock’s profit, revenue, costs and more.

We’ll take a closer look at each of these steps throughout the rest of this course. But to end this lesson, let’s quickly cover some of the main factors you might encounter in fundamental analysis.

Fundamental and technical analysis are two very different ways to approach the markets, but you don’t need to choose one exclusively. Many successful traders, for instance, choose to find markets using fundamentals, then switch to technical analysis to decide their best point of entry.

If you only use technical analysis, you run the risk of missing an external economic event that might send your positions reeling. Choose solely fundamental analysis, and you ignore the useful information that’s often found on a market’s price chart.

Interest rates might be the biggest driver of price movements across financial markets. As well as affecting forex rates directly, rate changes will ripple out across stocks, indices, commodities and more.

Because of this, traders will watch the actions of central banks avidly, trying to predict what they might do next.

Central banks will take inflation into account when planning interest rates – and inflation can also have a direct impact on many markets. There are two main ways of measuring inflation:

Releases of both can be major market events.

GDP data is released regularly, and it’s the percentage change from the last figure that traders and analysts care most about.

Natural disasters, such as flooding, hurricanes and tsunamis can have a major impact on the fundamental strength and weakness of an asset.

For example, the 2010 tsunami in Japan had a debilitating impact on the region's manufacturing sector, which caused significant disruption to the production of mobile technology and automakers. At the same time, the tsunami also increased expensive insurance claims which weighed on the balance sheets of major insurance firms.

Political crisis and uncertainty in a country will often play out across its financial markets. When a country is politically unstable, investors’ confidence in its economy tends to decrease, which can act as a drag on its stock markets, currency and more.

Politics can also affect commodities in a significant way. The world’s supply of oil, for example, can be drastically cut by conflicts in the Middle East.

Fiscal policies, such as budget planning, government spending and taxation encourage or discourage productivity and spending in the economy and therefore have a real impact on the markets.

A change of government can see significant volatility across forex, stocks and more – especially if the markets expect to see new policies on infrastructure or changes to business taxes.

Company earnings form a crucial part of fundamentally analysing whether a current share price is undervalued or overvalued.

Fundamental analysts can also get guidance on profit projections from earnings reports while looking at key contributing elements to the bottom line and then use this information to ascertain whether a company could outperform or underperform in their future earnings.