Now that you know how to open trades with orders, let’s look at using orders as risk management tools to close active trades.

What is a limit close order?

A limit close order is an instruction to automatically close a trade at a better price than the current available price of a market. This is why they’re commonly known as ‘take-profit’ orders.

Take profits can help you to be disciplined with your trading strategy and not chase profits unnecessarily. If the price doesn’t reach the limit level, the take-profit order does not get filled and your trade will remain active. Limit close orders are commonly paired with stop losses to ensure the risk of the market moving against you is also managed.

What is a stop-loss order?

A stop-loss order is an instruction to automatically close a trade at a worse price than the currently available price of a market. This normally means your trade would have made a loss. Stop-loss orders are a key tool in helping you minimise your losses if a price moves against you.

The placement of your stop loss will depend on your strategy and risk tolerance, but typically when buying a stop loss will be attached below a known support level and when short selling it would be placed above a level of resistance.

It’s important to note that in periods of high volatility, your stop loss may not be filled at the level you set.

This was an example of a basic stop loss order, but there are two other variants that traders use: trailing stops and guaranteed stops.

What is a trailing stop-loss order?

A trailing stop-loss order is created by setting up a stop order that ‘trails’ your position by a specific number of points. This is useful for ensuring that you lock in profits if the market moves in your favour, but keep a stop loss in place if the market moves against you.

If your trade moves in the direction you predicted, the trailing stop moves with the market, in the same direction as your potential profit. It remains the set amount of points away from the market price that you chose and will only be executed when the market moves against you by that amount.

As with standard stop loss orders, trailing stops may not be triggered at the specified price during volatility. 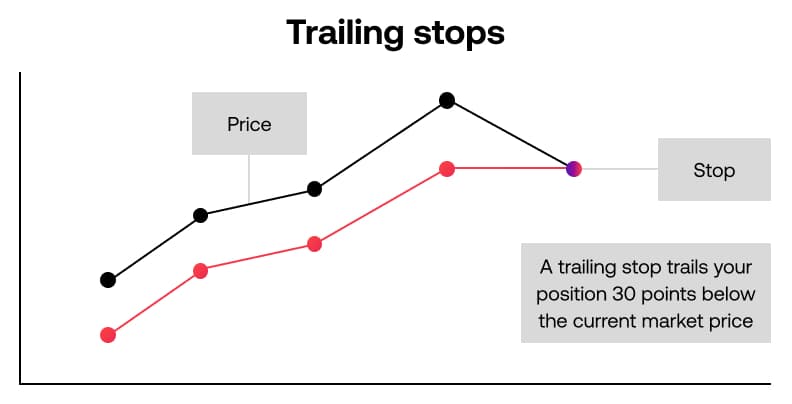 What is a guaranteed stop-loss order?

A guaranteed stop loss order (GSLO) is an instruction that works in the same way as a basic stop loss order, except it will be filled at the exact trigger value you set, regardless of underlying market volatility. This is useful if you want the added assurance that your position will be closed out at the precise price you specify.

Why? Because a standard stop doesn’t protect you against gapping or slippage.

A standard stop loss order doesn’t fully protect you from gapping or slippage, but GSLOs do.

What you should know about GSLOs:

For specific GSLOs on a particular market, please refer to the 'Market Information' tab within the City Index trading platform.

The GSLO premium for Wall Street is 2x the quantity of CFDs or stakes charged in the base currency of your account. In this case, the premium is calculated as 2 x 2 = $4, but it would only be charged if your GSLO was triggered.

Two days after you have placed your order, the price of the Wall Street Index suddenly drops lower from 32,420 to 32,259.

With a GSLO in place, your trade has been closed out at the pre-determined level of 32,300 for a total loss of $244 ($240 loss on your position + $4 premium on GSLO when triggered) preventing further loss as a result of market gapping. 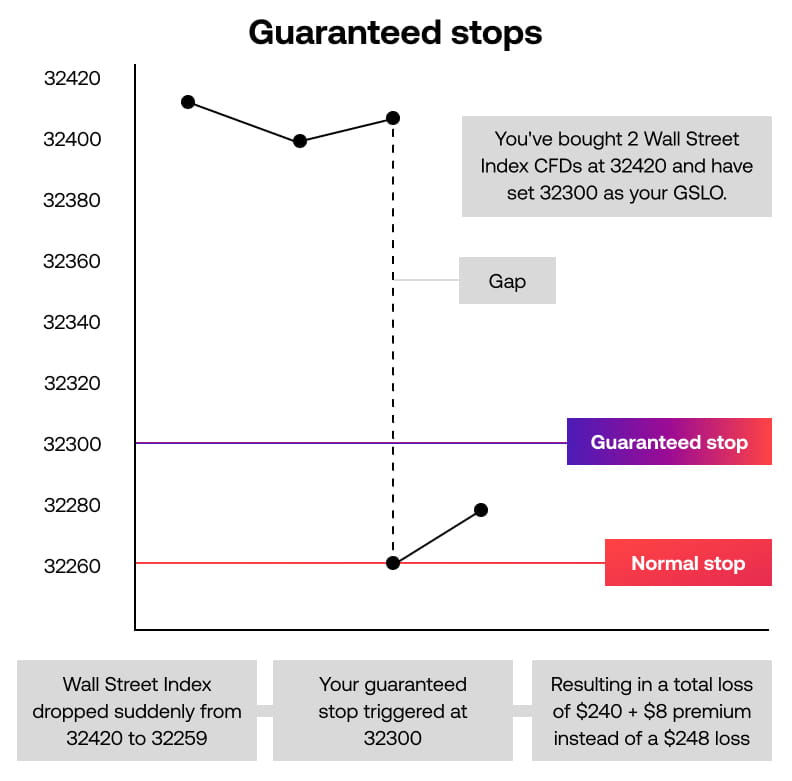 What is an OCO close order?

An OCO close order, meanwhile, is a type of exit order that involves setting both a stop and a limit at the same time. So if one executes, the other is cancelled.

Imagine non-farm payroll numbers are due for release at 1:30pm. You think the numbers will be positive and have a long position open. You want to protect your long position with a stop loss should the market not move in your favour but also want to ensure you could lock in your profits. 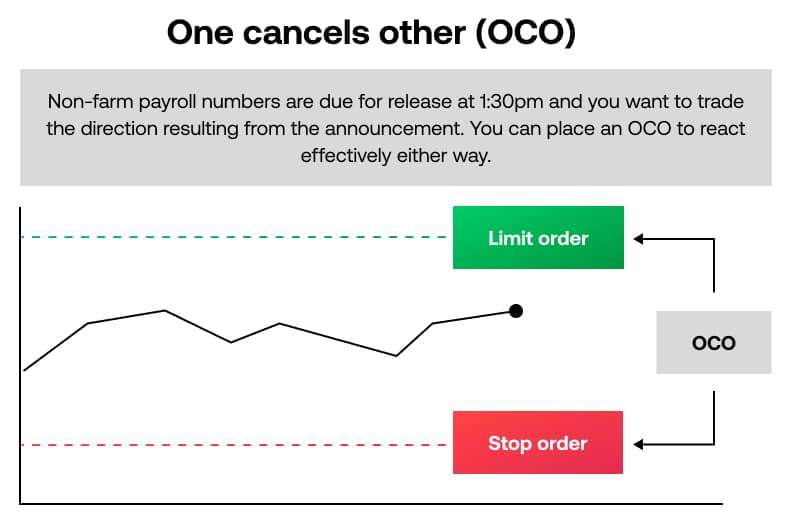 The market is currently at 5,500, so you place an OCO with a stop to sell at 5,450 and a limit to sell at 5,550. This way, whichever order is hit first will execute and the other order will be cancelled.

What is an 'if-done' order?

'If-done' orders, also known as contingent orders, are two-step orders where the second part is activated only if the criteria of the first has been met.

If-dones protect your position and can cover multiple outcomes to ensure the best outcome for your trade.

In this example you can see an OCO order to open a sell or a buy order for Procter & Gamble shares, should the price move approximately 5 points either way.

Each OCO order has an if-done order attached that adds on a stop and a limit to both parts of the order. The term if-done is derived from the idea that if one of these orders is triggered (or done), the stop and limit will then be activated, and orders on the opposing side cancelled. 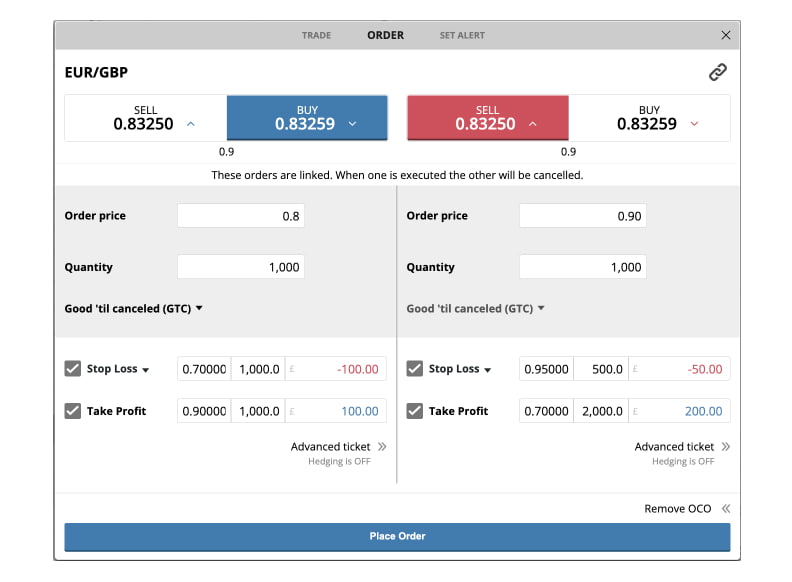 Open a risk-free demo account to practise buying and selling.