What is the doji pattern?

The doji pattern is a single candlestick that appears on trading charts. It has little to no body, meaning that the market’s opening and closing prices for the period were roughly (or exactly) the same.

Essentially, a doji means that – whatever other activity occurred during the candlestick – neither bulls nor bears were able to take control, and they ended up cancelling each other out.

There are four types of doji that you’ll generally encounter on trading charts: long-legged, dragonfly, gravestone and four-price. Let’s look at each one. 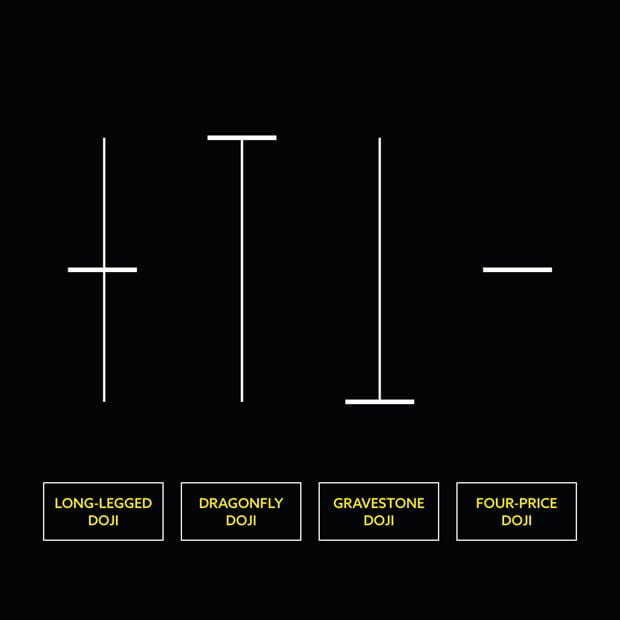 Long-legged doji have a long wick on both sides, indicating a lot of volatility within the session. Bulls sent the market up, bears sent it down – but by the end neither had the upper hand.

If you spot a long-legged doji with a slightly wider body, you have a spinning top.

A dragonfly doji, meanwhile, has a long upper wick and little to no lower wick. So, the market saw strong buying sentiment in the period, but by the end of the period it had been cancelled out.

Seen a dragonfly with a wider body? This could either be an inverted hammer or a shooting star.

Gravestone doji are the exact opposite of dragonflies. A long lower wick, signalling a bear run that reversed by the session’s end, and nothing (or close to nothing) on the other side.

A gravestone doji with a wider body can either be a hammer or a hanging man.

A four-price doji, finally, is a candlestick with little to no body and little to no upper or lower wick. They’re easy to spot because they almost look like a gap on the chart.

The market saw barely any volatility whatsoever, close to flatlining.

How to trade doji

Whichever type of doji you encounter on the markets, it usually means that sentiment is split. Neither bulls nor bears had the upper hand by the end of the session, despite any price action that occurred within.

On a flat or rangebound chart, that might not provide much to go on. But if you spot a doji in a strongly trending market, it could be a sign that momentum could be waning, signalling a possible impending reversal.

Say, for example, that you spot a dragonfly doji after a long bear run.

The long lower wick tells us that the market continued to fall at the beginning of the period. But by the end, buyers had intervened, and all the losses had been overcome. If that continues, then the downtrend might be over.

Like any reversal pattern, you could trade a doji by opening a position that profits from the possible reversal. In our example above, you’d buy the market in the hope that buyers can take control. However, a doji on its own isn’t necessarily a strong signal, so you’ll want to make sure that you have a stop loss in place.

An even better way to trade with doji, though, is to use it as part of a bigger pattern that offers a more reliable prediction of future price action.

As we’ve seen above, context is hugely important with doji. If our dragonfly doji appears in an uptrend, for example, it might signal a continuation instead of a reversal – since the initial reversal gets overturned by the end of the session.

One key example of dojis in context is the doji star pattern – also known as the morning star – which contains a doji as the second candlestick in its three-stick run. A doji star is seen as a strong signal of a bullish reversal.

You can also form a doji star with a spinning top in the middle, but the signal isn’t as strong. The opposite of a morning star is an evening star pattern.

You can try out trading doji risk free with a City Index demo account. It gives you virtual funds to hunt for doji across 1000s of live markets, including forex, indices, shares and more.

Is the pound set to suffer amidst Johnson’s latest political woes?
By:
Matt Simpson