When OPEC+ last met in early June, the Committee decided that it would increase output from 632,000 bpd to 648,000 bpd, as member nations decided to take the expected increase for September and divide it over July and August.  The question as to whether OPEC+ would increase production more than the 648,000 bpd it promised for August was answered almost as soon as the question could be asked.  As many as 4 sources from member nations said that they would not raise output more than expected.

As the US continues to release supply from the Strategic Petroleum Reserve, storage is shrinking.  Last week, the US released 6.9 million barrels, which puts the current level below 500 million barrels for the first time since 1986.  This is just as US President Joe Biden is planning a visit to Saudi Arabia in mid-July to ask for extra output to help with the relief.  However, it was reported on Monday that France’s Macron told Joe Biden at the G-7 meeting last weekend that Saudi Arabia and the UAE don’t have the extra capacity to produce more than they already are! This could increase the price of oil if true.  In addition, on Monday OPEC+ cut back on its projected 2022 oil surplus to 1,000,000 bpd from 1,400,000 bpd.  But last week, fears of a recession crept into the markets as Manufacturing PMIs in Europe and the US were worse than expected.  If a recession does come into play, this could help to lower the price of Crude Oil from the demand side.

WTI Crude Oil has been moving higher since early in the pandemic on monetary stimulus and decreased output from OPEC.  On February 28th, just before Russia invaded Ukraine, the price was near 93.39.  However, by March 7th, price rocketed higher putting in a near term high of 131.30!  Price pulled back to 93.30 on April 11th and then bounced to 124.38, forming a symmetrical triangle. 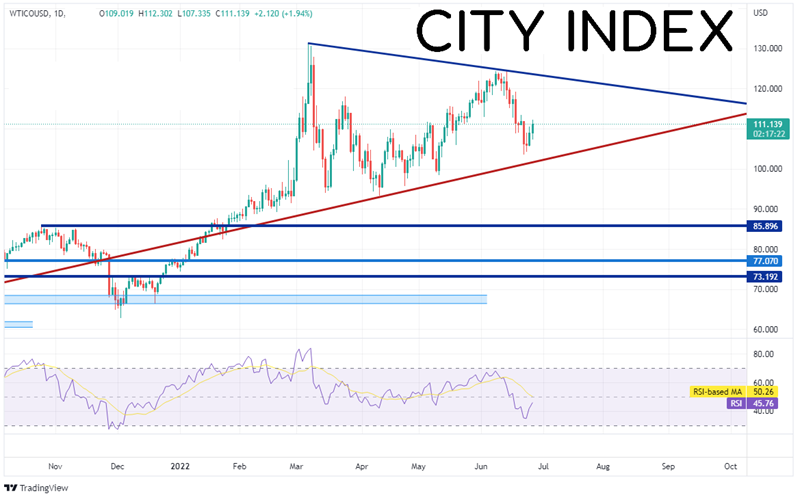 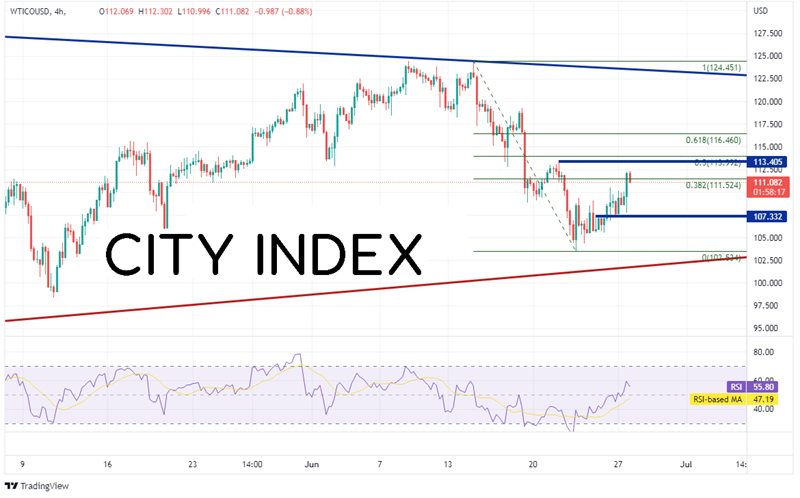 When OPEC+ meets later this week, it is unlikely to increase output more than the expected 648,000 bpd. Whether the reason is because they can’t, or just won’t, doesn’t really matter.  Things will get interesting when President Joe Biden goes to Saudi Arabia, especially if he returns with no additional oil!