Mexican standoff could drive stocks back into bear market

After blindsiding investors again with another tweeted policy shock overnight, Thursday’s tentative attempt by markets to stabilise have almost certainly failed. European stock indices post one of their biggest one-day drops of the month and Wall Street is scarcely faring better.

It comes as hopes dwindle that Washington’s relations with key trading partners can return to an even keel anytime soon. There are just 10 days before the first set of tariffs U.S. President Donald Trump threatens on Mexico kick in, leaving little time for Mexico City to respond. The plan is that the duties will then rise in 5% increments a month till they reach 25% in October, unless Mexico stems illegal immigration into the States. According to estimates from the Pew Hispanic Center, the Center for Migration Studies and the Department of Homeland Security, the undocumented Mexican population stopped growing in 2008 and has been trending downward ever since. Bloomberg news has even reported that apprehensions of illegal entrants are around their lowest levels since the 1960s. Aside from underlining the likely domestic political motivation of Trump’s gambit—think 2020—more importantly, it will be a tough ask for Mexico to clamp down on the current ‘surge’. As such, Washington’s threats looks designed to be carried out.

To be sure, assuming the U.S. does go ahead, its economy could probably weather even a complete breakdown of trade with Mexico. The country was America’s third-largest trading partner last year, with imports accounting for 13.6% of total U.S. incoming trade. Exports made up around 16%. Of course though, tariff damage has only ever been partly about direct economic impact. U.S. car shares have joined the tanking global auto sector on Friday afternoon, tracking fears about the hit to the roughly one-fifth of North American car production based in Mexico. A complex supply chain based in the country and spanning the globe is also in the spotlight. If investment activity is cancelled and employment reduced, that will be the surest way the Mexican standoff can have an effect far outweighing the value of disrupted trade.

Washington itself is belying Trump’s infamous assertion that trade wars are good and easy to win, recently disbursing $16bn in aid to U.S. farmers hurt by China’s retaliatory tariffs. The Fed has cut its median 2019 GDP assumption to 2.1%, even after growth of 3.1% in Q1. Global shares are already down over 6% since mid-April highs and the trade temperature shows few signs of abating, raising global economic risks. The likelihood is thus increasing that pivotal stock gauges will extend losses from peaks. A drop of 20%, from highs, often defined as a move into a bear market, and which often exacerbates the damage to sentiment, is within reach. With Trump on the trade war path, it is tough to see how risks to markets aren’t tilted even more to the downside. 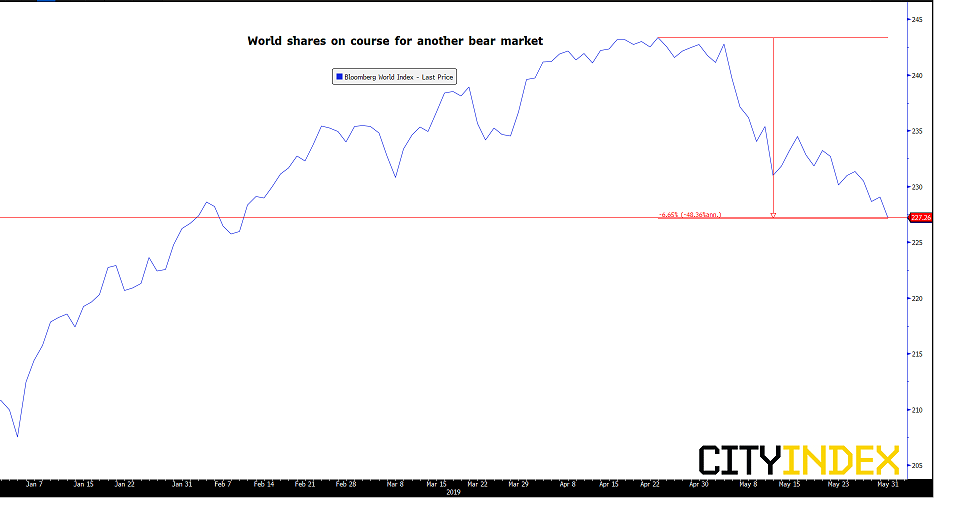