This article is a complement to our full 2020 Market Outlook report - please download the full report for more insight into our views for major markets this year, including bold predictions from the research team! Note that all analysis and data was current as of mid-December.

In the second half of 2019, new fronts opened up in the legal, regulatory and political threats facing vast U.S. tech firms. Chiefly, coordinated U.S. Department of Justice and the Federal Trade Commission examinations were announced in July. They are expected to take years to complete, though some negative early effects are possible, including a possible chill on M&A.

Meanwhile, Senator Elizabeth Warren has led Washington calls for the break-up of large consumer technology groups, including Facebook, Google and Amazon. In the 2020 election year, political scrutiny, and increasingly politicised regulatory pressures can only intensify. Amazon, for one, faced regular share price pressure in 2019, directed from a President whose displeasure with the firm and its Washington Post-owning founder, is clear.

Whilst these headwinds have failed to dampen enthusiasm for leading web entities entirely, it may be telling that a broader group which can be dubbed FAANG+ has been led in terms of share price performance by a firm that generates most revenues from selling iconic consumer hardware rather than from digital marketing or e-commerce.

The normalised chart below shows the percentage return of each FAANG+ share above or below the S&P 500’s gain in the year to date. On that relative basis, Apple’s 35% gain in 2019 added to the S&P 500 index’s 19% rise by the second week of December shows the iPhone makers’ stock had advanced 53%. And there’s no other way to portray Facebook’s 22% rise above the broader market as also depicting a stonking year for the shares. Yet, note FB was sharply outpacing AAPL till the end of July, with a relative price return of about 30%. Twitter suffered a more drastic reversal, now barely higher for the year. Netflix and Amazon performances also disappointed buyers. Google’s 4% uptick above the S&P 500 at the time of writing was nothing to write home about either. 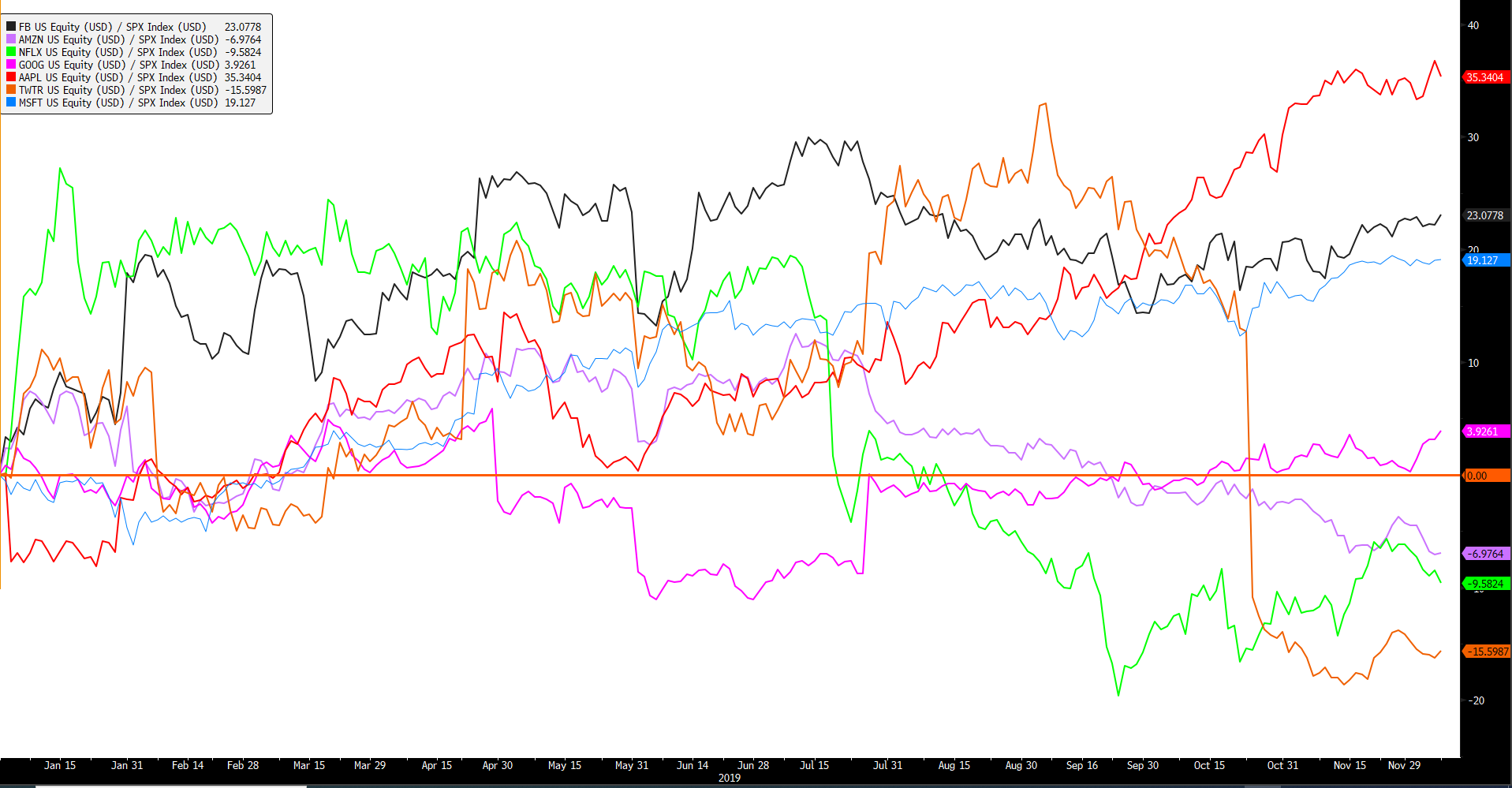 Yet having followed Big Tech groups closely in 2019, their often-dramatic price moves seem tied more cogently to growth, profitability and outlook than regulatory and political headwinds. We’ve already noted that Facebook looks to be largely shrugging off hits like a multibillion-dollar FTC fine whilst girding for potential further penalties in the coming months. The reason for the measured discount is almost certainly the new quantum of ad growth FB reported this year, partly linked to Stories.

Twitter’s woes are even more obviously down to its own internal missteps. The stock plummeted a double-digit percentage amount following a quarterly report in October that showed firm ad revenues. However, it also disclosed a ‘glitch’ at the same time that had enabled it to serve advertising to certain users without their permission. TWTR said it expected correction of the oversight to impact advertising sales. Still, if FANG+ stock volatility in 2019 had as much, if not more, of an interior basis than was driven by exterior pressures, that’s an implied positive ahead of a year when external challenges are certain to increase.

Below, we sketch the fundamental outlooks for FAANG shares in 2020

A Bloomberg survey of digital marketing executives in Europe and Asia just ahead of the publication of this report pointed to a 10%-20% rise in mobile advertising budgets. Given that Facebook ad growth outpaced that of its chief rivals Google and Twitter in the third quarter, it’s expected to benefit the most among its rivals. FB’s standalone opportunities include e-commerce solutions Pay, and Instagram Checkout. Consensus gross merchandise volume on the latter in year one points to $1.2bn. Overall FB’s year has demonstrated a fair attempt at controlling expenditure, enabling it to benefit from easier comparable quarters.

Investor reaction to the co-founders’ partial exit was eloquently communicated by the stock barely moving in the succeeding sessions. In fact, Larry Page and Sergey Brin were widely deemed to have disengaged years earlier. Notwithstanding the persisting regulatory headwinds Google faces on both sides of the Atlantic, steady advertising growth demand (referenced in the Bloomberg survey described above) should underpin Alphabet – even if the greater share of the pie currently looks destined for GOOG’s chief rival FB.

On the other hand, with a 2020 sales growth consensus of 18% vs. 22% at Facebook, Alphabet faces a less punishing year, even if it continues to be outflanked by faster-growing rivals. Alphabet also faces persistent questions about operating margin strength as it tries to balance hefty investment needs with profitability. It has yet to win back investors’ complete confidence that it’s got the balance right.

The second-worst-performing FAANG stocks in 2019 shows more than a hint of over-reaction that points to an upside opportunity in the year ahead. Free one-day shipping for Prime members has ravaged AMZN margins, but the quantum of revenue growth promised is considerable. Continued gains in ad, cloud and international margins ought to help offset the drag. Heavy expenses, including those related to the build-out of Amazon's private delivery network and Amazon Web Services (AWS), have hurt AMZN multiples.

With ample evidence that the addressable cloud market can support market leader AWS, fastest-grower Microsoft and relatively recent entrant Google, the cloud opportunity continues to eclipse AMZN’s ramp up costs. Even as margin volatility is expected to continue in 2020, 24.7% expected growth in advertising revenue in 2020 to $13.1bn, rising to $19.8bn in 2022, poses challenges for those betting against AMZN.

The 75 million U.S. Netflix subscribers Wall Street expects by 2024 will mean it remains the dominant individual streaming company, despite the deluge of new entrants emerging in recent months. $6.99 Disney+ will present the biggest challenge to NFLX, given that the midpoint of its projected U.S. customers by 2024 could be 85 million. Joint subscriptions in Disney-owned Hulu and co-owned ESPN+ would cost $12.99, level with the standard Netflix $13 plan. Such optics, plus NFLX’s long timeline to profitability can make 2020 just as hazardous for the stock as 2019. That’s despite an unassailable 300 million total NFLX subscribers, including international ones, widely forecast in around four years.

If 2020 is a year for anything at Apple, it will be the year of the 5G iPhone. The possibility of a cyclical upturn in sales of fast-network retooled handsets is obvious. However, it’s the maturity of the iPhone market that has largely restrained Apple growth over the last few years. As such, Apple can be expected to continue to train investors to study its ‘services’ side for truly sustainable expansion drivers. The 18.4% services rise year-on-year in the final 2019 quarter is well-founded, as the installed base edges higher amid rising prices and new offerings. Still, persisting China and tariff risks suggest that a reasonable discount against 2020 forecasts would be prudent. That said, solid gross margin stability into new year should limit negative eventualities.

A guide to the Google (Alphabet) stock split 2022
By:
Rebecca Cattlin

Trading FAANG: how to buy and sell FAANG companies
By:
Rebecca Cattlin

Amazon Q1 preview: Where next for Amazon stock?
By:
Joshua Warner

Apple Q2 preview: Where next for Apple stock?
By:
Joshua Warner