Now we know how to trade successfully to a plan, let’s cover how to safely let your positions run when they look like they’re going to break past your profit target.

Essentially, the key here is to actively manage your open trade.

When you actively manage a position, you move your exit points to reflect changing market conditions. So, if you think that your market is going to surge past your existing target, you could move that target upwards in an attempt to get a higher return.

However, actively managing trades can make them riskier, so, you’ll need to consider how to manage that risk.

There are two main methods of achieving this: moving your stop loss and scaling out of trades.

Moving your stop loss into profit

The biggest risk involved in letting profits run beyond your target is that the market reverses, eating into your profit. And the easiest way of negating this risk is to move your stop loss, cutting the maximum loss for your trade and possibly even locking in some early profit.

Try to avoid moving your stop loss in the opposite direction of your trade to give it ‘more room’. This can open you up to large losses.

The first move is often to where you entered the trade, which should mean that you’re guaranteed to at least break even from the position, assuming no slippage or gaps. Then, from there you can start securing profits and perhaps move the stop close enough to your profit target that you’re happy to remove your limit order and let the trade run.

When you move your stop is up to you, but if you plan on utilising this technique, then it’s a good idea to outline your strategy for moving stop losses as part of your trading plan.

Remember, the only way of ensuring that your stop is always executed at the level you specify is by upgrading to a guaranteed stop loss order (GSLO). Otherwise, slippage could still see you incur further losses.

Some traders only move stop losses for specific reasons – for example, the price has reached another plateau, or a new support/resistance level or a consolidation pattern.

Here is one possible approach for moving a stop loss:

If, for example, you have a long trade with a stop loss 100 points away, you might consider moving it up 50 points if the underlying market rises 50 points from your entry. Do this twice, and you’ll have moved your stop up 100 points – meaning it will be at your entry level, and you should at least break even from the trade.

Using trailing stops, you can even automate this process. Simply set a trailing stop 50 points from your position’s current level, and it will automatically rise if the market rises by 50 points.

Scaling out of trades

Scaling out is another way to lower your potential losses if a market moves against you. Here, instead of moving your stop loss, you partially close your position.

By partially closing your position, you can secure some profits early and leave the rest of your stake to run. It can help remove the stress of trying to find the perfect exit for a trade.

Again, how you scale out is up to you, but should be included as part of your trading plan. You could, for example, set up three exit points: closing half of your position in the first, 25% in the second and another 25% in the third. Or you could plan out scenarios in which you partially close your trade when you think there’s room for further profit. 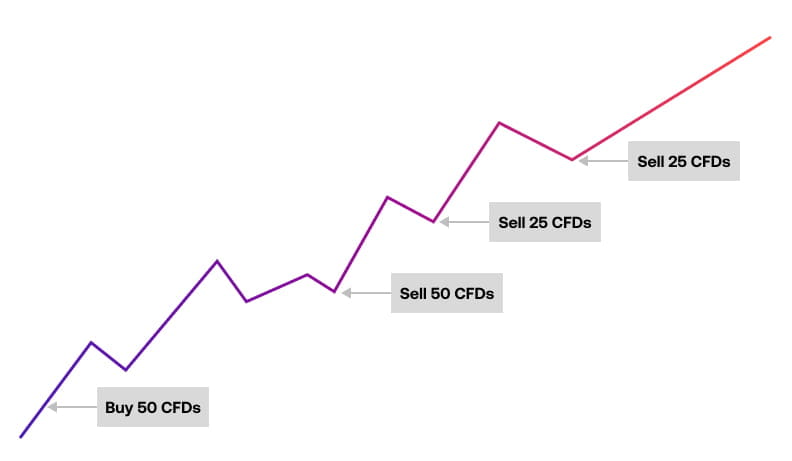 You can even combine this technique with moving your stop loss, giving you extra profit protection as you go. This may even help you create a ‘risk-free’ trade, where all you have is upside from your original outlay.

Of course, the downside of scaling out is that it lowers your potential profit from each position. If you leave all your money on the table throughout, then your profits can be higher – but so can your losses.

Scaling out of trades example

Say, for instance, that you have bought 100 Barclays CFDs and the stock is at your £2000 profit target. You think there could be room for further growth, but you’re worried about an imminent bear run on the stock.

Instead of closing your entire position, you could sell 50 CFDs, realising a profit of £1000. If Barclays stock doesn’t reverse, you could halve your position again, selling 25 CFDs and booking in more profit. Then, later, you can close the trade entirely by selling the remaining 25 CFDs.

Question {0} of {1}
You open a long £5 per point position on the FTSE 100 at 7156, with a guaranteed stop at 7136. Where should you move your stop to ensure that the trade at least breaks even?
Correct Incorrect Try again Next question
Question {0} of {1}
You’re planning on moving your stop loss whenever your FTSE trade earns 50% of its total risk. If you open at 7156 with a stop at 7136, when should you move the stop?
Correct Incorrect Try again Next question
Completed
Well done, lesson completed! Take the quiz again or move to the next lesson.
Take the quiz again
Next question Try again