Wizz Air FY preview: Where next for the Wizz Air share price?

Low-cost airline Wizz Air is scheduled to release its full year earnings covering the 12 months to the end of March 2022 at 0700 BST on the morning of Wednesday June 8.

Management plan to hold a conference call with investors at 0900 BST.

Starting with the fourth quarter, Wizz Air has said it expects to report an operating loss of between EUR190 million and EUR210 million. That will represent a slight improvement from the third quarter loss of EUR213.6 million but will be wider than the EUR145.2 million loss booked the year before. Notably, analysts currently believe it could miss that upgraded guidance and book a loss of EUR212.5 million.

For the full year, Wizz Air has said its net loss will be between EUR632 million to EUR652 million, which will have swelled from the EUR572.1 million loss booked the year before. Analysts believe the loss will come in at EUR637.4 million.

Wizz Air shares sit over 38% below where they sat before the pandemic erupted back in 2020 and the airline remains in recovery mode following a tough couple of years plagued by the pandemic.

Wizz Air is expected to have carried 26.7 million passengers during the year, more than double the 10.2 million that flew with the airline the year before. Still, that remains well below the 40.0 million passengers that used Wizz Air during the 2020 financial year, before the pandemic hit.

Markets believe passenger numbers will surpass pre-pandemic levels and hit 52.2 million in the new 2023 financial year. The airline said in April that it was ramping up capacity and that available seat kilometres (ASKs) would be some 30% ahead of 2019 levels between April and June (marking Q1) and over 40% ahead of pre-pandemic levels between July and September (Q2). That outlook has been supported by the fact both capacity and passenger numbers have increased markedly month-on-month between March and May, since the problems posed by the Omicron variant started to fade away.

Still, the planned improvement pencilled-in for this year faces several threats. Firstly, Wizz Air has been more exposed to the impact from the war in Ukraine as this has disrupted operations in its core markets in central and eastern Europe, although it has already shifted some capacity out of Ukraine, Russia and other nations like Moldova to other countries.

Secondly, Wizz Air has continued to expand its fleet (with 150 aircraft at the end of December compared to 137 just nine months earlier), which should give it the capacity it needs to meet a surge in demand this year but could also weigh on profits should demand remain volatile or be hit by new headwinds.

Thirdly, Wizz Air said in April it has hedged around 36% of its planned jet fuel needs between until August 2022 at a price of $1,130 per metric tonne in an effort to defend itself from soaring prices. However, the amount of fuel hedged is much lower than its European rivals while the price tag is also significantly higher. For example, easyJet has 71% of its fuel needs hedged over the next six months and at a price of just $619 per metric tonne, while Irish carrier Ryanair has hedged 80% of its fuel needs for the current financial year and has said the prices locked-in will provide a ‘considerable competitive advantage’. The fear is that Wizz Air’s lack of hedging will make it more exposed to rising costs and make it more difficult for it to pass these on to customers, especially in an environment when all airlines are competing on price as they try to entice customers back.

Wizz Air said its focus in the new financial year will be on ‘maximising revenue and returning to productivity levels seen during the pre-Covid years’ and has said this ‘should result in improved profitability’. With that in mind, analysts currently believe Wizz Air will remain in the red this year and report an operating loss of EUR27.8 million and a net loss at the bottom-line of EUR109.9 million.

In the shorter term, analysts believe Wizz Air will see its operating loss narrow to EUR75.2 million in the first quarter of the new financial year – so keep an eye on any initial guidance issued by the airline as this will prove crucial in deciding how markets react to the update.

Where next for WIZZ stock?

Wizz Air shares have collapsed over 42% since the start of 2022 as markets remain cautious despite the improving outlook for travel demand this year.

The stock is testing the 2,713p level of support seen during March and April today which, if it fails to hold, will open the door to the next level of 2,535p. Any move below here would be more significant as it brings the 11-month low hit in early March back into play and could see shares slip back below 2,420p. The bearish RSI, supported by a rebound in trading volumes over the past 20 days, suggests the stock could come under further pressure.

The 21 brokers that cover Wizz Air have mixed views on the stock but overall they see over 32% potential upside from the current share price with an average target price of 3,659.66p. 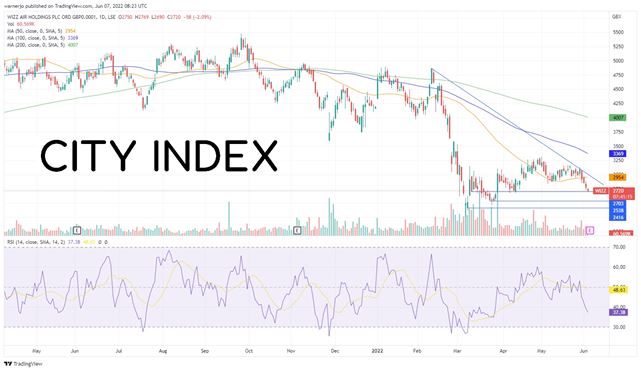