Salesforce Q1 preview: Where next for Salesforce stock?

When will Salesforce report Q1 2022 earnings?

Salesforce is scheduled to release first quarter earnings after US markets close on Tuesday May 31.

In addition, the company is due to hold its annual general meeting on Thursday June 9.

Wall Street forecasts Salesforce will report a 24% year-on-year rise in revenue in the first quarter to $7.38 billion and that adjusted EPS will drop over 21% to $0.95 from $1.21. The topline estimate is at the top-end of Salesforce’s guidance, while the EPS forecast is ahead of the $0.93 to $0.94 targeted by the company.

Salesforce, one of the world’s leading providers of Customer Relationship Management (CRM) software, has seen its share price plunge over 23% since it released its last set of results in early March, despite the fact it reported record revenue and raised its expectations for the new financial year.

That is because markets have become concerned about the growth outlook amid a rapidly-changing environment. Salesforce has already conceded that topline growth will grind to its slowest rate in years during 2022 and admitted that earnings will decline for a second consecutive year. The fact the global economy has drastically changed in recent months – rattled by the likes of the Russian invasion of Ukraine, fresh Covid-19 lockdowns in China and rampant inflation – is only adding to the downside risk.

This earnings season is proving to be a pivotal moment that is revealing which companies can deliver during tough times and those that are struggling to justify their lofty valuations now that economic growth is slowing down.

With this in mind, analysts believe Salesforce can grow revenue by 22.6% in the second quarter to $7.77 billion, which would mark another record sum for the business, and deliver adjusted EPS of $1.14.

Salesforce has said current Remaining Performance Obligations (cRPO) should grow 21% in the first quarter. This is a solid indicator of near-term growth as it represents the amount of money locked-in from customers through contracts but not yet received, so provides an insight into how the topline will fare in the near future. Any surprise here could prove pivotal in deciding how markets react to the update – a beat will signal that it is keeping up the momentum while a miss could stoke fears that the tough economic conditions are starting to cause a slowdown. With this in mind, analysts think Salesforce will beat its guidance and deliver a 23% rise in cRPO to $21.89 billion in the first quarter.

Any changes to the full year outlook could also prove influential. Currently, Salesforce is aiming to grow revenue by 21% this year to $32.0 billion to $32.1 billion, which includes a $1.5 billion contribution from Slack following the acquisition in the middle of 2021. Salesforce is targeting adjusted EPS of $4.62 to $4.64, which will be down some 2.2% from what was delivered last year.

Any commentary about Slack will also be closely-watched by investors. Management said in the last conference call that it had no major M&A in the pipeline following the $27.7 billion deal and that its primary focus was on integrating its products with Slack. This has already helped boost demand for its Customer 360 portfolio and management said Slack had exceeded expectations during the last quarter. The lack of new M&A on the horizon may disappoint some investors considering Salesforce has expanded its portfolio through other sizeable M&A in recent years, such as the addition of MuleSoft in 2018 and Tableau in 2019, which have provided new catalysts for the company.

Salesforce should prove a relatively resilient stock in a slower-growth environment. Its products are key for businesses that are digitising and shifting online, and the contract-nature of its business also provides some level of certainty over the near-term. The fact it has a broad suite of products makes it a more important supplier compared to companies that offer a single service, such as video conferencing capabilities.  Salesforce said it is expecting the sales software market to grow by double-digits over the next several years and that is ‘well-positioned to capture the highest growth areas of the market such as revenue management and planning’.

Where next for CRM stock?

Salesforce shares have plunged over 47% since peaking at all-time highs last November but appears to have found a floor after hitting a two-year low of $154.55 this month.

The fact this level of support has been tested several times during May supports the view that it can hold. A break below here would open the door to $150 and then the $142 level of support seen in late 2019.

Yesterday, we saw Salesforce shares break out of the latest leg of the downtrend that started in early April. If the current floor holds and the stock can gain momentum then we could see it swiftly recapture the 50-day moving average at $186 before targeting a move back above $200 for the first time in almost two months, in-line with the 200-day moving average. Beyond there, the crosshairs can turn to the March-high of $222. Notably, the 53 brokers that cover the stock see greater upside potential and believe it can hit $266 within the next 12 months – a level last seen in December. 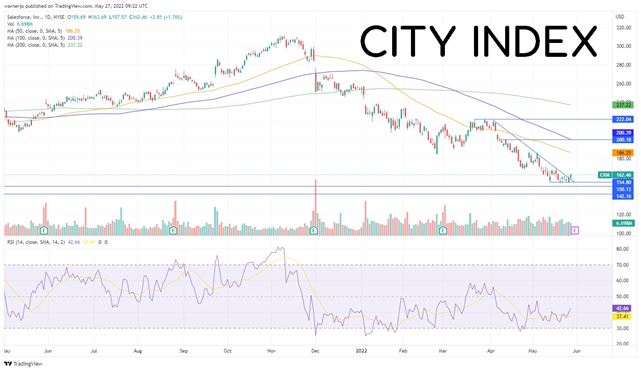 How to trade Salesforce stock

You can trade Salesforce shares with City Index in just four easy steps: