What comes next for gold?

After spending the better part of eight weeks trading sideways, gold finally made its move. In this article, we provide a recap of some of the factors that conspired to send the precious metal lower and what comes next for gold.

The subsequent modest recovery in gold prompted by an escalation in violence in Hong Kong as well as a review of the factors above, perhaps the most significant of which is news that the U.S. - China trade deal has reached a stalemate.

CNBC have reported that due to President Trump's reluctance to roll back tariffs, China will hold off from signing the trade deal until after the U.S. election. In the meantime, it will provide the Chinese economy with economic support, evidence of which is the PBOC cutting the 7-day repo rate yesterday and a cut to the Medium Lending Facility rate two weeks prior.

Casting a shadow over the assertion that U.S. economic activity turned higher, lower than expected U.S. inflation, retail sales and industrial production numbers last week. The U.S. interest rate market is once again fully priced for a 25bp cut over the next 12 months.

In line with our article two weeks ago, gold has thus far held the wave equality support $1440/30 area. The formation of bullish Doji candle at the $1445 low was a positive development and a trigger to consider entering longs as outlined here;

“Providing a bullish reversal candle then forms in the $1440/1430 support area it would be the setup to re-enter gold longs in anticipation of a move above $1600 for Wave V.”

A daily close above the $1475/85 resistance zone is needed to further support the idea that a low is in place at $1445 and that the uptrend has resumed. 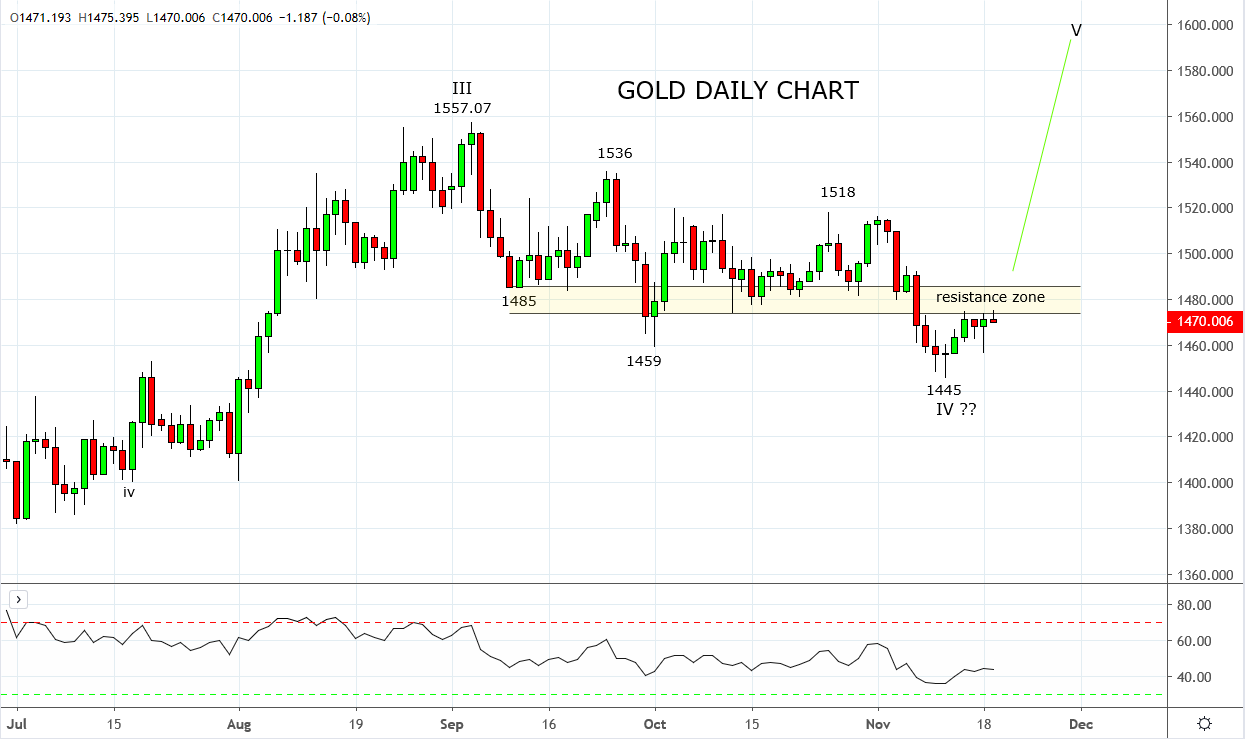 Source Tradingview. The figures stated areas of the 19th of November 2019. Past performance is not a reliable indicator of future performance.  This report does not contain and is not to be taken as containing any financial product advice or financial product recommendation

Gold looking to extend rally as yields and dollar retreat
By:
Fawad Razaqzada

Gold holds post-FOMC bounce ahead of GDP
By:
Fawad Razaqzada