Weekly Recap/Week Ahead: What Just Happened?

Weekly Recap/Week Ahead: What Just Happened?

I don’t even know where to start:

As stock markets came off, the carry trade has been unwinding.  The idea behind a carry trade is that when a currency has a low yield,  traders “borrow” money from the lower yielding currency (such as Euros) and buy stronger, riskier yielding assets, such as stocks or the Mexican Peso.  However, when the stock market falls, these traders must sell stocks and buy back (or pay back) the currency it borrowed, such as the Euro.  This is most likely why EUR/MXN is up +6.5%.   The ECB has rates set at -0.5%, while the Bank of Mexico has recently cut rates to 7%.  Because of the unwinding of the carry trade, EUR/USD is up 1.6% from near 1.0800 to near 1.1050 this week.  For a currency pair that has traditionally moved with stocks, this is a large move, relatively speaking.

The Australian Dollar and New Zealand Dollar have been hit this week, as their economies are closely aligned with Chinas.  New Zealand also reported its first case of the coronavirus on Friday.  AUD/USD and NZD/USD are both down 1.5% this week.  In an unrelated note, EUR/GBP is up over +3% this week, but this has more to do with UK-EU trade negotiations than it does with the coronavirus.

The flight to safety was in full effect this week, as Japanese officials halted their buying of Euros and US Dollars and let the Yen gain.  USD/JPY was down 3.3% this week.  This could have been a much larger loss had it not been for the GPIF (Japan’s largest pension fund) on the bid earlier in the week, allegedly.

But what happened to precious metals?  Someone forgot to give gold and silver the memo that this was a risk off week.  Spot gold is down -3.6% on the week and silver is down -10.26%.  Both assets put in bearish engulfing weekly candles.

Because of a lack of demand for oil, Crude Oil has fallen over -16% this week and is currently trading near $44.50.  OPEC will hold a meeting next week to try and determine how to halt falling prices, as Saudi Aramco has recently announced they are supplying China with 500,000 barrels less a day than normal.

Central Banks, including the US Federal Reserve said they will do whatever is needed to support the economy. The next Fed rate decision meeting isn’t until March 18th, however if things continue to worsen, there is no reason for the Fed to not cut inter-meeting.    China is providing massive stimulus, such as lending to banks.  Hong Kong is giving away $1200 a person.  The SNB said they will cut if necessary.  RBC said the expect Canada to now cut rates at their rate decision meeting next week, and Goldman Sachs expects the Fed to cut 3 times in 2020, from a previous forecast of 1 time.

This week we are likely to see more volatility.  In addition to more likely cases of the coronavirus in the US and across the globe, we will have beginning of month economic data, primary elections, more volatility, and more worldwide government official comments, most likely including the WHO, CDC, the Trump administration (watch to see if it is “contained” in US), and Central Banks.

Along with Saturday’s South Carolina Democratic Primaries, “Super Tuesday” will be the most important date before the US election.  15 Democratic primaries will be held on March 3rd  to help determine who will run for President vs Donald Trump.  This is the most primaries on any day before the election. Included on Super Tuesday is California, which has the most delegates to offer in the country (415).  Currently, Sanders (45) is in the lead, followed by Buttigieg (26), Biden(15), Warren (8) and Klobucjar (7).  But that can all change on Tuesday with a total of 1,357 delegates up for grabs.  A total of 1,991 delegates is needed to win the Democratic nomination.  In addition, Michael Bloomberg will be on the ballot for the first time, which will add more chaos into the already crowded mix.

Important Economic Data for the first week of March is as follows:

Is there really much to say about this chart?  It looks horrible!  Price has fallen every day this week and given up 21 weeks of an uptrend.  “Up with the Escalator, Down with the Elevator” best describes the price action in this chart.  Prices halted at the previously low from the week of September 30th ….for now.  This is the largest ever price selloff in the S&P 500 (not in percentage) in one week.  Support at today’s lows near 2853.25.  The 127% Fibonacci extension from the Sept 30th lows to last weeks high is 2710.  There is horizontal support there as well. 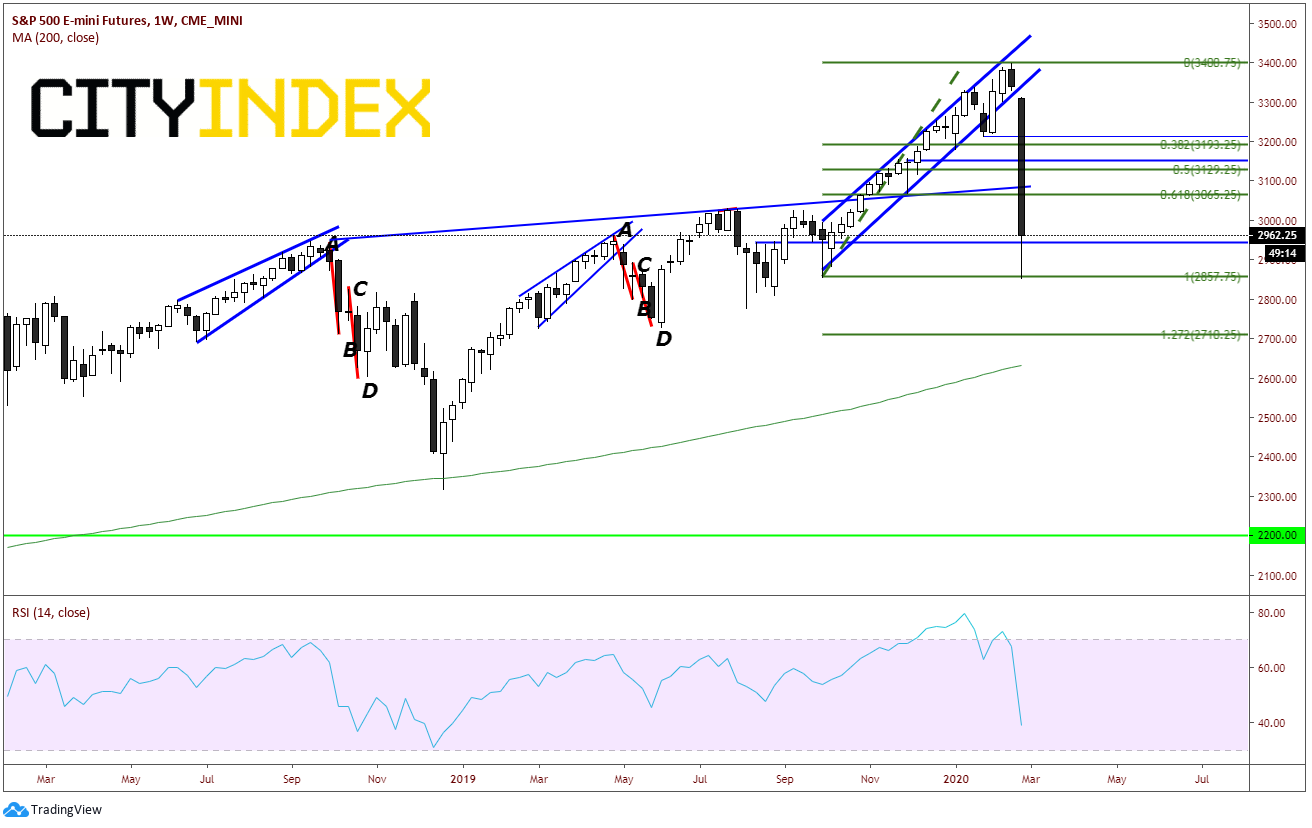 I want to show the daily chart as well.  Although we can see how awful price action has been over the last week, take a look at todays “hammer” candlestick.  When hammers form at the bottom of and large downtrend, they are often reversal signals (but that doesn’t mean price can’t move towards the lows for the next few days).  In addition, notice the RSI on the daily in oversold conditions and turning up.  Resistance at the 200 Day Moving Average above near 3050. 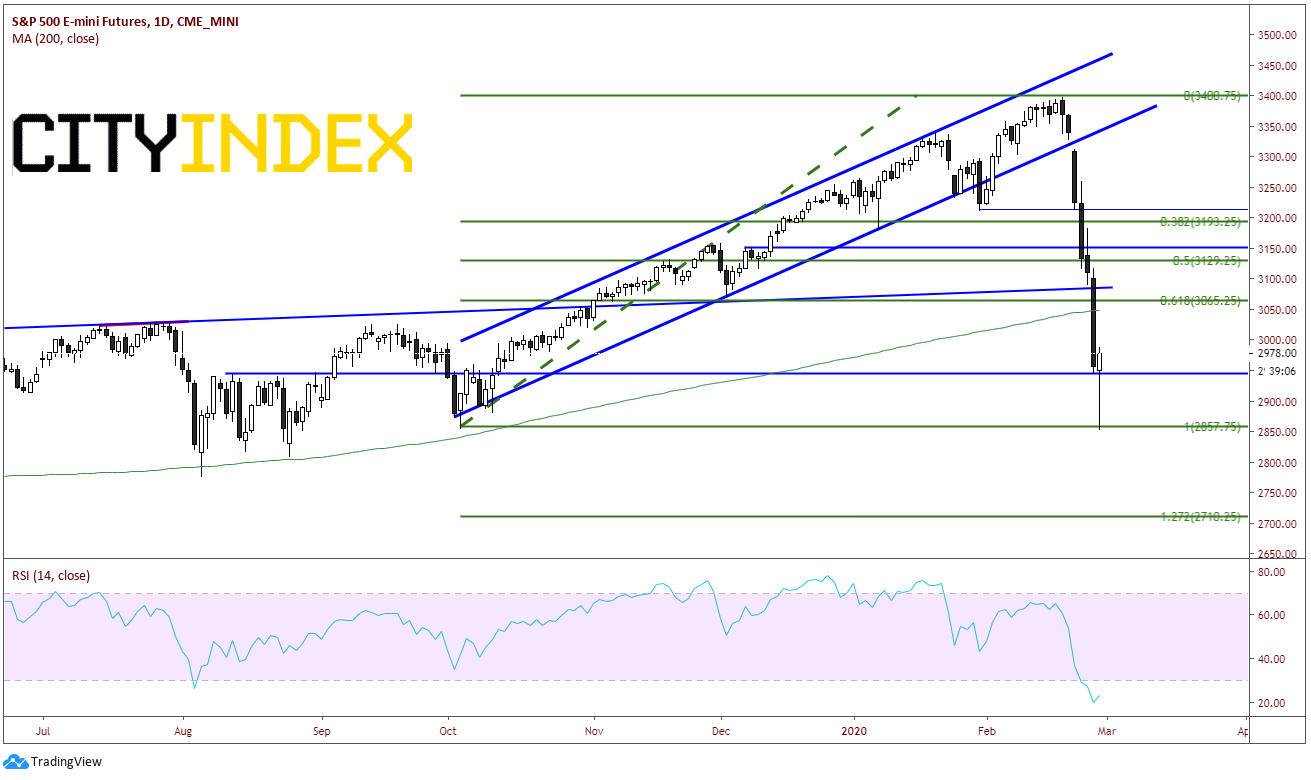 Have a great weekend, stay safe, and make sure to always wash your hands!!