Week Ahead: UK’s New PM, ECB and US GDP

The week ahead is set to be a quiet one in terms of macro data, but there will be plenty of company earnings to look forward to. In addition, the UK will welcome its new Prime Minister while the ECB will make a decision on interest rates.

Here is the calendar highlights for the week ahead:

From the above, it is clear that there are at least three major scheduled fundamental events to look forward to: (1) the Tory leadership race finale; (2) ECB rate decision, and (3) US Q2 GDP estimate. Let’s take a look at these in turn.

Clearly the pound, euro and dollar will all be in focus due to the above fundamental reasons. The EUR/GBP should be the one to watch if you prefer to avoid the dollar until Friday’s GDP is published. But it is worth pointing out that GBP/USD was able to hold above the 2018 low of 1.2440 for the second consecutive week, after slipping below this level in mid-week on both occasions. There is a possibility therefore that the cable may be in a reversal profile now, especially in light of dovish commentary coming out of the Fed. The GBP/USD needs to create a higher high now to confirm the potential reversal. But as far as the EUR/GBP is concerned, well there is a shooting star/gravestone doji candle to watch on the weekly. With rates potentially reversing, traders may wish to zoom into smaller time frames for trading this potential reversal more precisely. 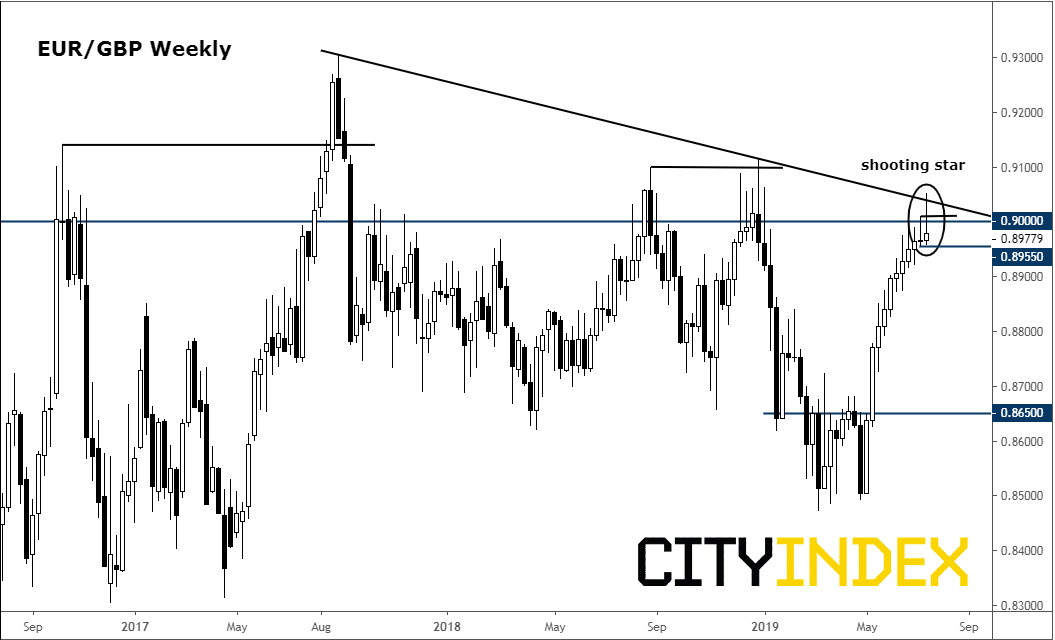