Week Ahead: FOMC, BOE and NFP

The week ahead features interest rate decisions from the Bank of Japan, US Federal Reserve and Bank of England, as well as top their data culminating in US jobs report on Friday. On a micro level, there will be plenty of company earnings results to look forward to, including from Apple. Here is the calendar highlights for the week ahead:

From the above, it is clear that there are at least three major scheduled fundamental events to look forward to next week: (1) the FOMC’s policy decision; (2) BoE’s Super Thursday, and (3) US non-farm payrolls report. Let’s take a look at these in turn.

A lot has been speculated about the upcoming FOMC meeting. While a 25 basis cut is baked in, traders have continually been re-adjusting the probability for a 50 basis point rate cut at this meeting in response to mixed-bag US data and Fed’s conflicting commentary. Overall, we don’t think the current economic conditions in the US warrant a 0.50% rate cut at this meeting. However, the Fed will want to avoid making the dollar even stronger or Trump angrier by not moving at all. So, a 0.25% cut is almost inventible. How will the dollar respond? Well it depends on the outlook for future rate changes. If the Fed cuts rates by 25 basis points but strongly hints at the prospects of further cuts in the upcoming months then this should be bearish for the dollar, although the greenback may initially spike higher given the somewhat elevated expectations for a 0.50% cut – clearly some dollar bears will be disappointed in this (likely) event. However, if the forward guidance is not as dovish then the dollar could very well stage a sizable rally.

The Bank of England, already concerned about the markets under-pricing the risks of a no-deal Brexit, will be more concerned now that the new UK Prime Minister is hard-line Brexiteer, who has vowed to take the UK out of the European Union on 31st October come what may. However, the pound’s reaction was muted to Boris Johnson’s victory this week as this was already priced in and the legal framework was in place to make a no-deal exit harder to achieve, regardless of who became PM. Still, the boffins at the BoE may now become more dovish on the outlook for interest rates and the economy. In fact, some would argue they should already be alarmed by how domestic data has taken a sharp downturn in recent months, following a similar pattern in mainland Europe. Judging by what the presumably-well-informed ECB’s Mario Draghi said in his presser yesterday – that the Eurozone’s economic outlook is becoming “worse and worse” –this bodes ill for the UK’s exports and thus economy. The Bank’s Monetary Policy Committee will be aware of this and other risks facing the UK when making their latest GDP and inflation forecasts in the Quarterly Inflation Report. So, we think that it will not be a so-called “Super Thursday” for the pound as the BoE is likely to be more dovish this time than they have been previously. But even if the pound stages a bit of a recovery, ongoing Brexit uncertainty will likely cap the gains in the medium term.

Obviously the Fed may have already set the tone for the dollar at their policy meeting, which takes place two days before the jobs report is published on Friday. But the degree to which the dollar will respond to the nonfarm payrolls report will be subject to how data-dependant the Fed’s next move will be. I have a feeling that the Fed will make a strong case that future rate decisions will depend on incoming data. Although they do this all the time, this time they may put more emphasis behind it. After all, the US economy has not fared as badly as many had feared. Indeed, US GDP came in at +2.1% compared to +1.8% expected on Friday and the dollar responded positively as investors reduced their dovish expectations. Admittedly, the 2.1% annualised GDP reading is not something to show off about, it is still better compared to many other regions among the developed economies. Thus, a surprisingly strong set of jobs and wages figures on Friday could support the dollar further. Conversely, if the numbers turn out to be poor, then expect the dollar to fall back.

The cable broke down on Friday amid worries over a hard Brexit and the UK economy, while the dollar rallied on the back of a stronger US GDP report as investors reduced expectations over a large interest rate cut from the Fed next week. Traders should watch the GBP/USD closely as we enter the low $1.20s in what will be an important week from a macro point of view. For reasons given above, we think the GBP/USD may extend lower in early next week, with momentum selling pressure also weighing on rates. 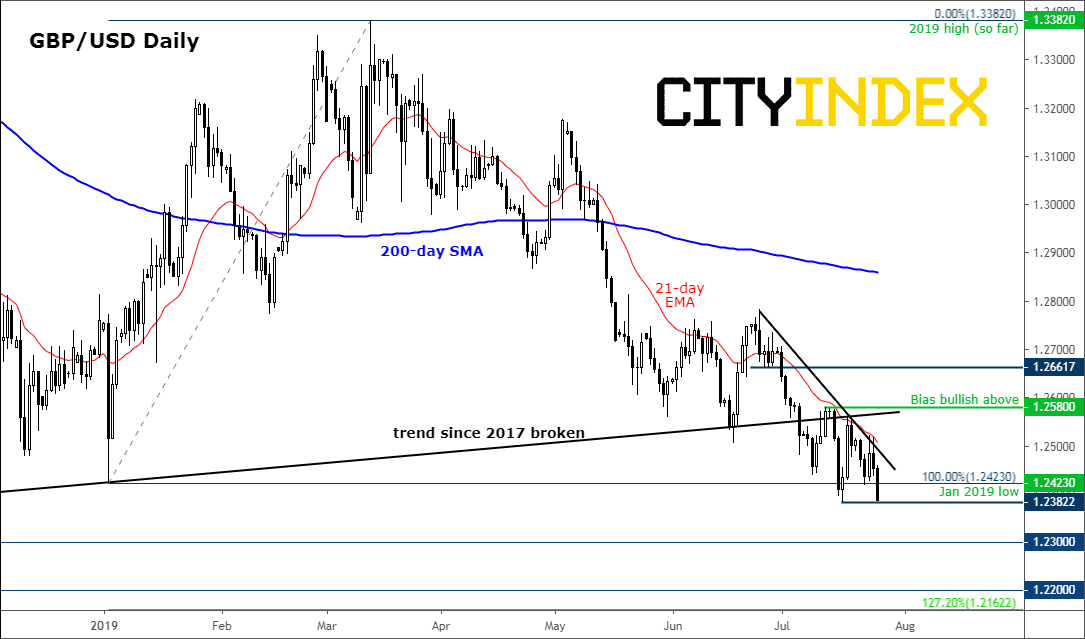