USD/CAD Retraces Most of Its Move Since Mid-October

USD/CAD Retraces Most of Its Move Since Mid-October

From October 10th to October 29th, USD/CAD was pushing lower from 1.3362 down to 1.3030, threatening to breakdown from the symmetrical triangle the pair has been in since early 2016. 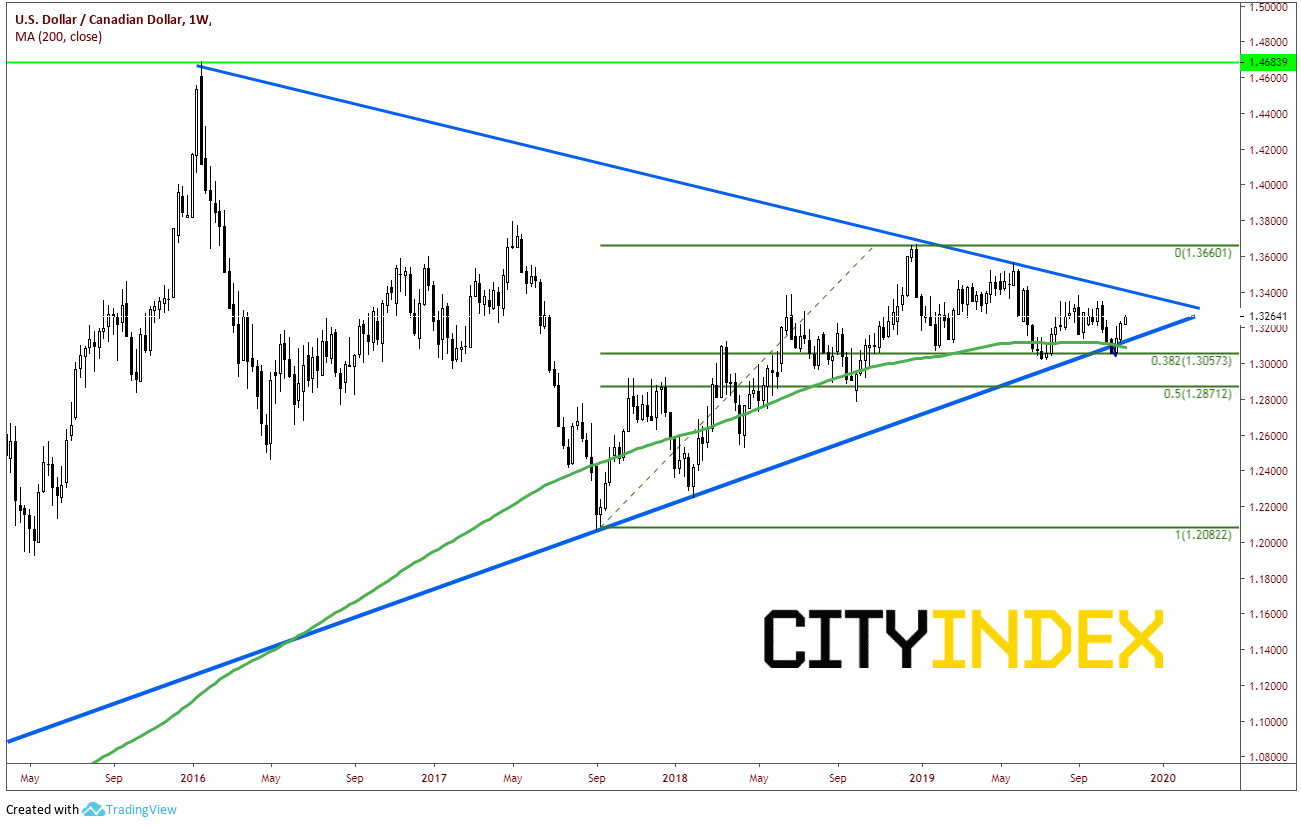 The market was pricing in a more hawkish BOC than the FOMC on October 30th, when both Committees coincidentally happened to be meeting on the same day.  However, since the October 30th, USD/CAD has reversed and retraced 78.6% of the move from mid-October.  So, what has changed?

First is that although the BOC left rates unchanged, they lowered their growth outlook.  They were less hawkish then expected, and therefore, send USD/CAD bid off the lows.  Second is that the Canadian data from since October 30th has been worse than expected.  Specifically , the Ivey PMI was 48.2 vs 53.0 forecast and they employment change for October was -1,800 vs +20,000 expected.  US manufacturing data and employment data was roughly in-line to better than expected.

Technically, on a daily timeframe, USD/CAD put in a false breakdown below the rising trendline of the symmetrical triangle at the 38.2% Fibonacci retracement level from the September 2017 lows to the December 2018 highs.  The pair formed a falling wedge into the low and broke out higher reaching the 100% retracement target of the falling wedge rather quickly.  Price is currently testing the 200-day moving average at 1.3275. 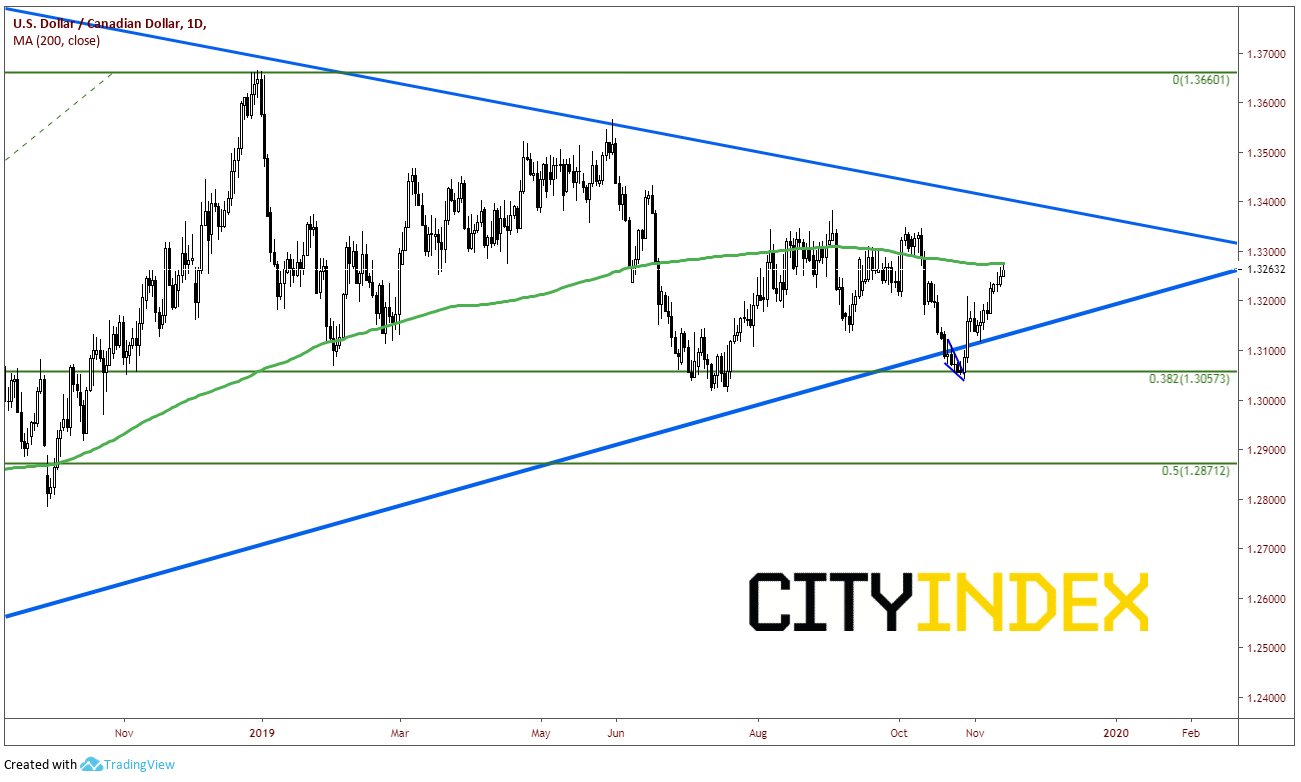 On a 240-minute time frame, we can see how USD/CAD broke out of the falling wedge and has retraced back to the 78.6% Fibonacci retracement level from the highs on October 10th to the lows on October 29th and is currently trading in an upward sloping channel.   There is a large confluence of resistance which comes in slightly above currently levels (1.3260).  In addition to the 200-day moving day moving average at 1.3275, that 78.6% retracement level is at 1.3280.  There is horizontal resistance at 1.3290 and the top trendline of the channel also crosses near that same level.  Support is now at the bottom trendline of the channel at 1.3247.  Below that is horizontal support near 1.3210.  There is then major support as the bottom trendline of symmetrical triangle (on daily and weekly timeframe), which crosses near 1.3140.  In addition, the 200-week moving average crosses near that same level! 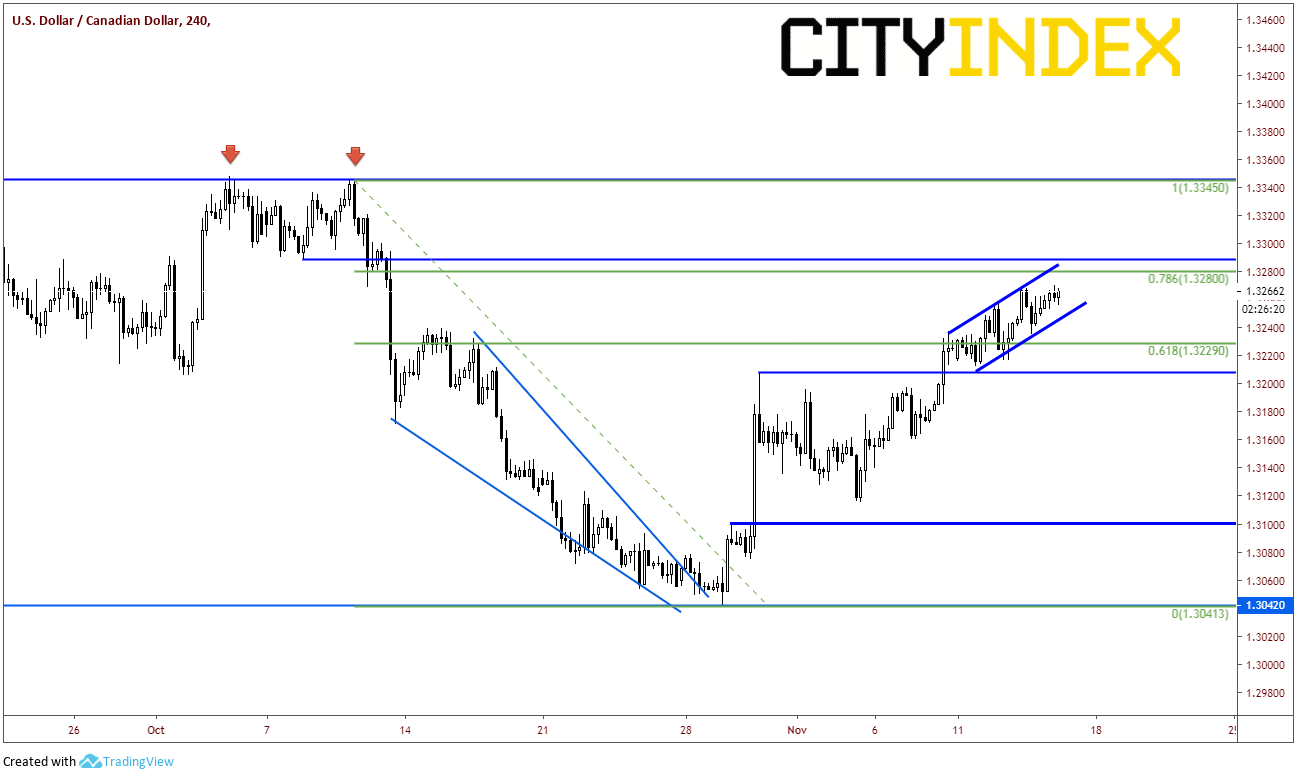 What can cause USD/CAD to finally break out of the apex of the symmetrical triangle the pair has been in for so long?  For starters,  Bank of Canada Governor Stephen Poloz is speaking later this evening  at the Federal Reserve Bank of San Francisco.  Watch for changes in his “less hawkish” language from the October 30th statement.  In addition, Canada is set to release CPI, ADP employment data, and Retail Sales next week.  These figures will give a better indication of how well the Canadian economy is holding up.