The normally tranquil Friday Asian session of trade was rudely interrupted this week by a surprise decision from the Bank of Japan.

The excitement started just as US markets were closing down for the day when Japan released disappointing data on household spending (-4.4% y/y vs. -2.3% expected) and Tokyo Core CPI (-0.1% vs. +0.1%) eyed. Then, about an hour before the BOJ’s official monetary policy announcement, the massive Japanese conglomerate Nikkei reported that BOJ members had discussed the prospect of negative interest rates in an effort to stimulate Japan’s moribund economy. Anyone who’s been following the central bank rumor mill over the past few years know that almost every major central bank has “discussed” negative interest rates, but that it there is a big difference between talking about it and actually making the decision to cross the proverbial 0% interest rate Rubicon.

As it turns out, that rumor actually understated the BOJ’s seriousness as Kuroda and company opted to cut interest rates to -0.1% on certain types of excess cash reserves starting February 16th. The decision to cut interest rates was hotly-contested, winning by a narrow 5-4 vote, but nonetheless represents an historic step in the BOJ’s long-standing efforts to stimulate Japan’s economy. Logistically, the impact of the change in policy will be relatively limited, as it will “only” apply to about ¥10-30T of reserves (the vast bulk of reserves will continue to earn 0.1%), but it does send a strong signal that the BOJ will be aggressive in preventing any additional strength in the yen. The BOJ simultaneously downgraded its assessment of the economy by cutting its inflation forecasts for the coming 12 months nearly in half (from 0.8% down to 1.4%) and pushing back the timeframe for achieving its 2% inflation goal to the 2017-2018 period.

With most analysts anticipating no change from the BOJ, it’s no surprise that we saw a huge move in the yen overnight. USD/JPY surged nearly 300 pips from pre-BOJ levels to hit a 5-week above 121.00, and rates are holding at that level as of writing midday Friday. Just like that, the pair has rallied back into the middle of its 14-month 116.00-125.00 range.

Moving forward, the technical picture could still support further gains in USD/JPY. The MACD is now trending solidly higher and about to cross back above the “0” level, signalling a return to bullish momentum, while the RSI indicator is still not in oversold territory, despite this week’s surge. To the topside, the next levels for bulls to key in on will be the 78.6% Fibonacci retracement of the Nov-Jan drop near 122.00, the November peak at 123.75, and the top of the established range at 125.00. Meanwhile, traders may want to fade any future moves toward the bottom of the range, as the BOJ is clearly trying to draw a “line in the sand” to prevent further appreciation in the value of the yen. 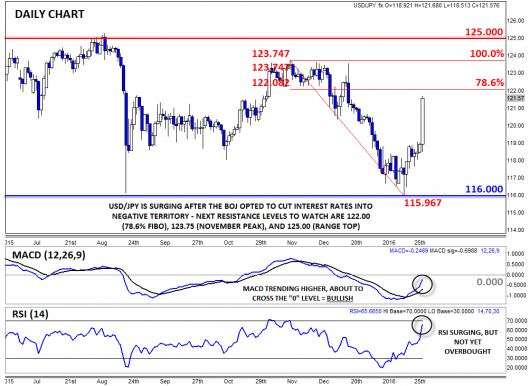