With Fed rates about to fall, the stakes are rising for the big six U.S. lenders

Once again, we are about to enter a Low Interest Rate Policy world as the Fed and a host of other developed-world central banks prepare to embark on renewed policy easing. For almost all of the corporate world, that’s a welcome prospect, though not for banks. The cornerstone of lenders’ businesses is net interest income, the difference between their average loan rate and average interest paid on deposits. When base rates fall, bank profits soften. For the dominant U.S. banks, low Fed rates coincided with problematic share price progress. Over the last few years, their share performance relative to the broader market has been much improved, juiced by a combination of Fed rates ratcheting higher and a Trump tax boost. With the effect of the latter fading and the Fed on course to unwind tightening, most U.S. Big Bank stocks have underperformed so far this year. 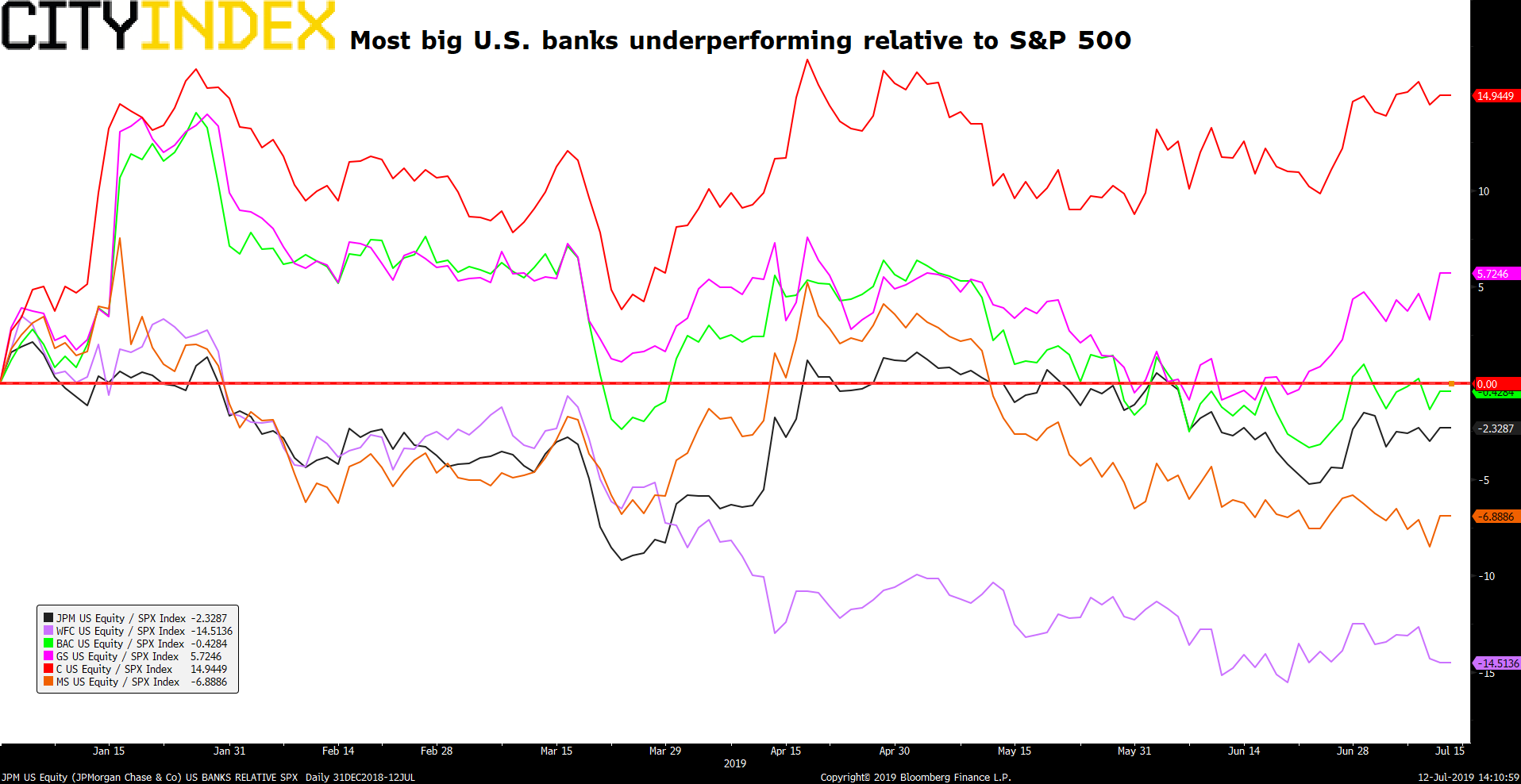 Of course, banks also need firm economies, strong employment markets and inflation to thrive. The U.S. has the first two in spades and the latter looks stable albeit somewhat below target. Lenders with the strongest capital positions and well-oiled franchises—see JPMorgan and Bank of America, for instance—have noted they expect to weather a rates downturn. Weaker and smaller ones, like hamstrung Wells Fargo, or $74bn ‘minnow’ Morgan Stanley, may suffer more. With sliding rate expectations increasingly reflected in rates that impact borrowing costs, like U.S. Treasury yields, banks’ guidance about the year ahead may be more important than their performance in the second quarter.

Key points to watch when The Big Six report earnings

The Big Six Earnings: what to watch

Citigroup earns a higher share of revenue globally than large U.S. peers, increasing exposure to everything from the trade conflict to a global slowdown. Investors will particularly eye progress of the U.S. card business and credit costs. Adjusted EPS is seen jumping 11%; revenue is set to fall 1.6%

The U.S. leader has been vocal about continued challenges in its market businesses, but its dominant position will tend to make growth assured. Even so, net interest margin will be in focus after the measure of loan profitability missed estimates slightly in Q1

The bank prohibited by Fed edict from growing its capital as a punishment for a false account scandal, still has no permanent CEO. Still, the Fed raised no concerns about proposed higher dividends, so investors will weigh the possibility that cautious views on costs could hit the top line.

GS’s results are amongst the most hotly anticipated bank releases due to interest in the new CEO’s somewhat leftfield steps—like the Apple tie-up and the Marcus retail unit. Goldman already flagged an above forecast 47% dividend rise, so eyes will again be on the cratering market operations. They may play a large part in another big expected earnings fall, with a 14.2% decline seen this time

BAC’s huge consumer and commercial loans book have led it to tone down expectations as it scopes out the impact of increasingly imminent Fed rate cuts. Earnings per share growth may slow to 10.7% from 14.5% in Q1

The smaller mega-bank was firing on many cylinders in Q1 reaching a medium-term return on equity goal early, with an above forecast trading result and wealth management growth within target range. Despite outperformance though, earnings still fell in Q1. At $1.17, adjusted EPS is again estimated to be lower than the year before, in Q2, this time by around 6%