The Hang Seng remains in freefall, Alibaba below 100

Equity investors have been attacked on multiple fronts

Global equity markets have suffered these past two weeks since Russia invaded Ukraine. But it should be remembered that these markets were already under pressure ahead of the invasion. There had been a build-up of tensions this year, as Russia had actually began rallying their troops back in November. Investors also had to contend with the prospects of the Fed’s tightening cycle, which then prompts either central banks to follow suit. Yet rising oil prices has rekindled fears of stagflation, which is negative for equity markets.

And if we hone in-on Asia, investors also had the regulatory crackdown to contend with, which shows no signs of abating. For example, Beijing have since proposed a further tightening of the regulatory screws on the gaming industry, which has weighed on Tencent and NetEase, and of course the broader market. And as for Hong Kong, resident are living in fear of a mainland-China lockdown potentially on the horizon, and that can be clearly seen on the Hang Seng (HSI) which has fallen to a 5-year low.

We can see on the daily chart that the Hang Seng is effectively in freefall, and close -19% lower form its year-to-date high. It has since fallen below the March 2020 low which is significant, as it marks the height of the pandemic when central banks flooded financial markets with easy money. So the fact it has broken that milestone level is very telling, and the market now appears set to test 20,000 whilst prices remain below 21,328. 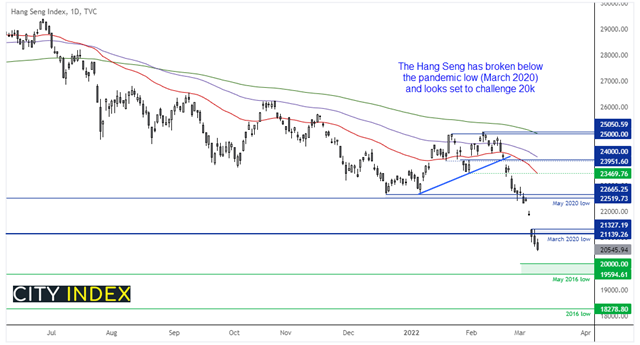 We highlighted Alibaba’s head and shoulders top pattern in February, and it remains very much in play. Their Q4 revenue was a disappointment which saw the market gap below the neckline and is now trading below $100. We can see that it has gapped higher on the HKEX exchange as appetite for risk is making a return. But with a multi-month downtrend and break of key support (108 – 110) last month, our downside target around $83 remains in focus. From here we would like to see bearish reversal patterns below 108 to allows for fresh shorts. And the bearish bias is invalidated with a break above $111. 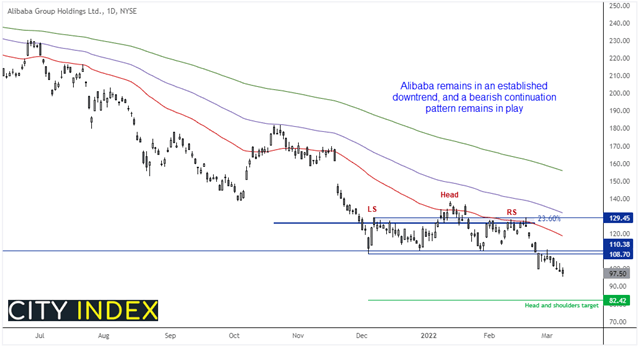