Tesla surge at risk of reversal

Tesla finishes the short Wall Street session ahead of Thursday’s 4th July holiday with a 4.6% advance. That’s below Wednesday’s 7.5% surge to a two-month high at $241.57. In fact the move largely matched the size of the stock’s 17th June advance. That one, like the one around a fortnight later was also in reaction to delivery headlines. This time, rather than industry speculation, Tesla itself confirmed a record 95,200 deliveries in the three months ending in June. The news provides some reassurance to investors that the Model 3 maker can avoid a worst-case delivery shortfall scenario. Ultimately, that occurrence could place fresh obstacles on its long road to sustainable profitability.

Whilst welcome, the deliveries, which beat a consensus estimate compiled by Bloomberg News, are more like a step in the right direction in dealing with Tesla’s most pressing challenges. That partly explains why much of the initial price move faded into Wednesday’s early close. There’s a fair possibility of reversal when trading resumes on Friday too. The stock had fallen as much as 46% between the start of the year and early June amid concerns about the $41.84bn group’s ability to continue to fund itself as its rate of cash consumption accelerated.

The group reported that orders exceeded deliveries during the quarter, suggesting that in theory, Q2’s figures could be repeated, particularly as Tesla also expects top raise production in the current quarter. After missing self-imposed targets habitually over the years, much of Wall Street is likely to remain sceptical. The group has guided towards a loss when it reports results late this month. Bloomberg’s consensus adjusted net income forecast points to a $44m loss. At the very least, great delivery news may ensure that the figure isn’t much worse

The good news is that Tesla shares may be on the verge of a definitive break out from their falling trend in place since early December. The slide was codified by a declining channel since January which shares have also now escaped from. Furthermore, the stock has enjoyed support from its 21-day moving average (red-dotted line) since early last month, a sure sign that buyers are beginning to take back control. They have finally blasted TSLA above $232, former solid resistance. Key challenges now are the 38.2% Fibonacci of TSLA’s December-June slide, marking $254, and $258, site of a reversal after a promising struggle in May. The region is in confluence with longer-term resistance largely corroborated as the bottom of the stock’s former trading range. 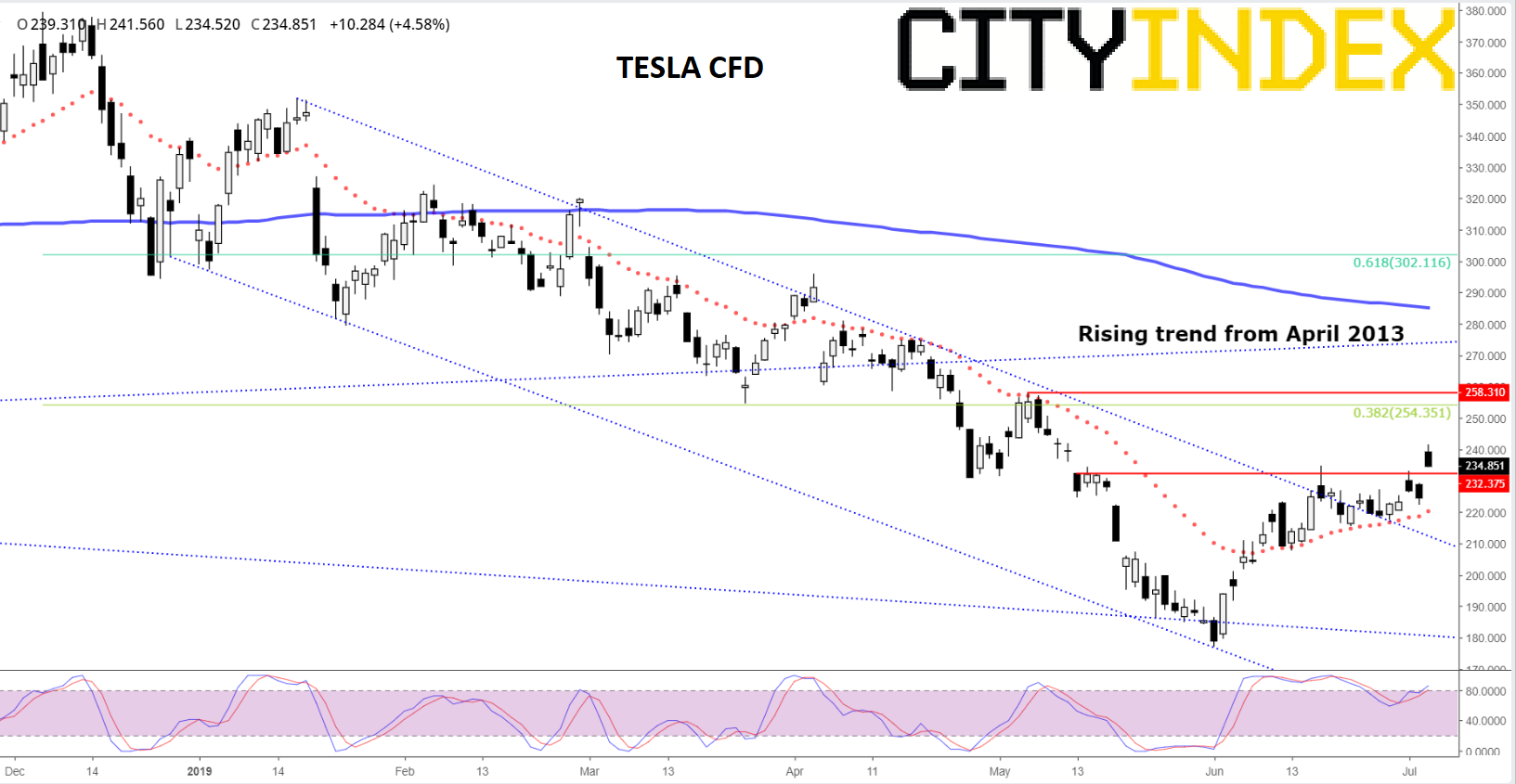