US crude oil (daily chart shown below) has been in a relatively steep ascent for the past month since the new six-year low around 42.00 was established in mid-March. That low dipped under the prior multi-year low of 43.60 that was hit in late January.

Having formed the two tentative bottoms in the first quarter of this year, crude oil has shown some signs of an attempt to recover from the prolonged plunge that has been in place for the past ten months. 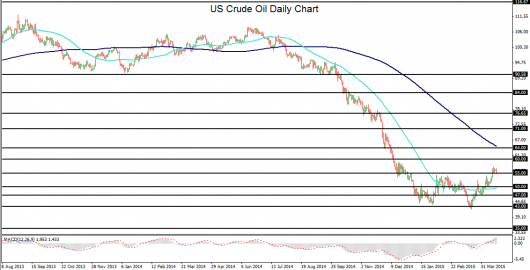 Any further rise and recovery has its next price target around the key 60.00 level. To the downside, tentative support on any pullback continues to reside around the 50.00 level, which is also in the current vicinity of the 50-day moving average.