Stocks: US earnings in focus as Russell tests 2014 low

After a strong performance in the first half of the day, the global equity indices have given up significant chunks of their earlier gains. Clearly, bullish traders are still lacking in confidence after witnessing the worst ever start to a year last week, mainly because of growth worries in China. These concerns could intensify if Wednesday’s trade figures point to further slowdown in the world’s second largest economy. Stocks are also pressured by additional sharp falls in the price of oil to fresh multi-year lows. At the moment not many people are expecting to see a significant rebound in oil, so prices are continuing to gush lower to multi-year lows as sentiment goes from bad to worse, as clearly reflected in positioning data. According to the CFTC, for example, there was an 11 per cent rise in short bets in the week to 5 January while net long positions were reduced to their lowest level since July 2009. But with the rig counts falling by another 20 last week to their lowest since April 2010, it is only a matter of time before US oil output responds in a meaningful way. So, we could be very close to a bottom, but when and at what price level this may be it is anyone’s guess at this stage.  The good news is that we will find out soon. But as far the wider US stock markets are concerned, the fourth quarter earnings season could provide some support. Aluminium producer Alcoa will unofficially mark the start of the reporting season with its results after the closing bell tonight, followed by a couple of major banks later in the week.

Earlier today, we reported that the German DAX index was among the major global indices testing a significant support level. Often, what happens around such levels will determine at least the short-term direction for the markets. This time, we are looking at the US small-cap Russell 2000 index, which can often provide a more accurate picture of the health of the stock markets as opposed to the larger peers such as the Dow Jones and S&P 500.

As the chart shows, below, the Russell has had a terrible time of late, with the index not only breaking last year’s low, but also testing the 2014’s low of around 1040/2 today. Here, it was also testing the 127.2% Fibonacci extension level of the rally from July 2015, around 1037. Thus, the 1037-1042 is a key support range and what happens here could determine the direction for the next few days.

The bulls are encouraged by the fact the momentum indicator RSI is in severely oversold territory and is in a state of positive divergence: it is making a slightly higher low relative to its 2015 low, while the underlying index is making a lower low. This suggests that the bearish momentum may be fading and that we could see a bounce back from here.

The bears will look at the recent crossover over the 50-day moving average below the 200, and the breakdown of several support levels and the bullish trend line as reasons to remain pessimistic. This group of market participants may want to wait for a sizeable pullback to a key resistance levels before showing their presence. Alternatively a decisive breakdown of the above-mentioned support in the 1037-1042 range could also encourage fresh selling.

If the sellers win this battle then their next immediate target may be the psychologically-important level of 1000, followed by the 161.8% Fibonacci extension at 990. On the other hand, if the bulls win this battle then a bounce towards the old support range at 1074-1080 could be highly likely. A decisive break above 1080 would be a bullish development, which could see the index rise towards its moving averages again. 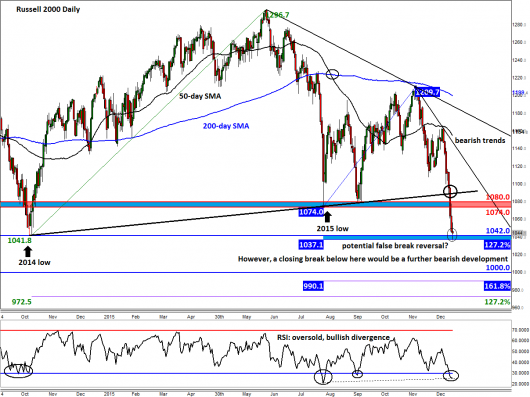