By :
Fawad Razaqzada
,  Market Analyst
Financial markets continued to crumble at the start of the new week, although at the time of writing by lunchtime in London there was some mild buying observed in some risk assets amid bargain hunting.
Earlier, global stocks, US futures, government bonds, cryptos, commodity dollars, emerging market currencies, metal prices and even crude oil all dropped. To give you an idea of how bad the selling was, the Nasdaq future was down more than 3%, while Bitcoin was 10% worse off at one point.
Once again, the main beneficiary of all this was the US dollar, which found support on haven flows and favourable interest rate differential given the fact that the US Federal Reserve is expected to continue with its aggressive hiking on Wednesday. Markets have priced in 175 basis points of Fed tightening by September. The dollar rally helped to lift the USD/JPY to its highest level since 1998. The EUR/USD slumped below 1.05 handle, while GBP/USD fell to 1.22 on the back of a 0.3% drop in monthly GDP estimate and a 1% decline in manufacturing production data, both confounding expectations.
But as stated, there was some evidence of mild buying in a number of markets mentioned – although it was too early to tell whether asset prices had hit a bottom. Gold and silver were not immune to the rising dollar and yields. But given the fact they had bucked the trend on Friday, precious metals perhaps have the best chance of a comeback in this market environment.

So, what is causing this sell-off?

Well, a number of things, but it all boils down to inflation. Very hot inflation. This is causing panic among global central banks, as they rush to tightening their policies in order to help bring price levels down. Investors, in turn, are seeing their portfolios suffer sizable losses, causing them to reduce their risk, which is further fuelling the sell-off.

As we found out on Friday, US May CPI came in at 8.6% year-over-year, which was up from 8.3% recorded in April and defied expectations of 8.3%. Core CPI wasn’t very hot, but it beat forecasts, nonetheless. It fell to 6.0% from 6.2% but was still above forecasts of 5.9%.
It is not just the US where inflation is becoming a big problem, but the rest of the world as well. In eurozone, for example, CPI is at a record high of 8.1%, while in Turkey it is in excess of 70 percent!

The sharp rise in price levels is obviously not good for the global economy. Consumers are spending more of their disposable incomes on staples, leaving them less to spend on luxury items. Businesses are facing higher input costs, which is eating into their profit margins and forcing them to pass the costs onto consumers. Workers are demanding higher wages, further increasing costs on businesses. All this is weighing on consumer and business sentiment. This was evidences last week with the UoM’s Consumer Sentiment index plunging to 50.2 from 58.4, missing expectations of a 58.0 print.
It is essential that this vicious cycle comes back under control, which is why some central banks are scrambling to tighten their policies, having helped to fuel inflation with their past actions.
So, it is worries about sustained high inflation which is driving aggressive interest rate rises in some regions of the world, especially the US, which is unnerving investors the most. On top of this, the ECB’s lack of anti-fragmentation support packages is not helping to soothe investor nervous either.

Friday’s US CPI surprise underscores the need for tighter monetary policy from the Federal Reserve and other central banks. As the Fed and others have admitted the need for ‘more forceful’ monetary tightening to address surging inflation around the world, this is keeping US indices – the Nasdaq in particular – and other risk assets under pressure. 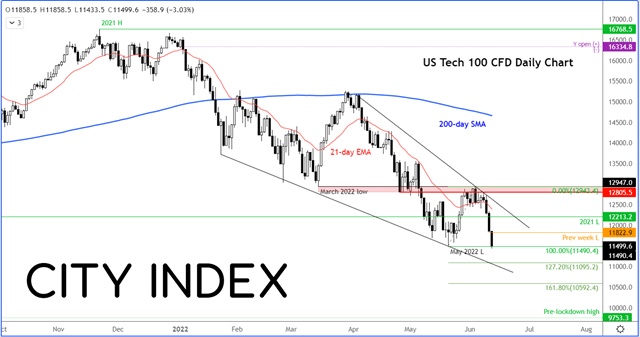 With the Nasdaq futures down over 3%, the tech-heavy index is below the May lows and thus at a new low for the year. Previously, the Nasdaq had relinquished its entire 2021 gains. Now it is eating into its 2020 gains.
Technology stocks have come under increased pressure as the Fed’s rate hikes is making government bond yields more attractive to yield seekers than the low dividend-yielding Nasdaq.
Even less attractive to yield-seekers is cryptos, which don’t pay any dividends or interest. This is why Bitcoin, Ether and other digital assets have fallen even more profoundly during this bear market. On Monday, Bitcoin plunged another 10% to below $24K handle as risk aversion increased further: 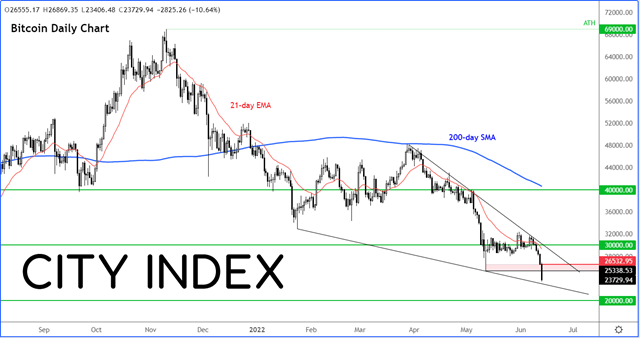 More forceful tightening is also supporting the US dollar against weaker currencies – especially those of energy importers, not least the Japanese yen and Turkish lira – and gold. The risk off tone is going to hurt commodity dollars, too, which until last week had been more immune to the US dollar rally.
So, with consumer sentiment deteriorating, inflation and interest rates on the rise, investors are left with little choice but to sell equities and hold cash. Against such economic conditions, there is a risk we will see a sharp rise in interest rate projections from Fed officials this week, which could hurt risk assets even further. Keep your belts tightened, as volatility is going to remain very high, for a long time. ComDolls like NZD, AUD and CAD are in danger of deeper falls.

Sentiment in Europe is very negative right now. The German DAX index fell 2.5% in the first half of Monday’s session, mirroring similar falls in the rest of the region. The euro slipped below the 1.05 handle. Italy’s 10-year bond yield hit 4% for the first time since 2014 as the bond sell-off deepened in Europe. This further pressurised risk assets, including stocks, euro and cryptos. 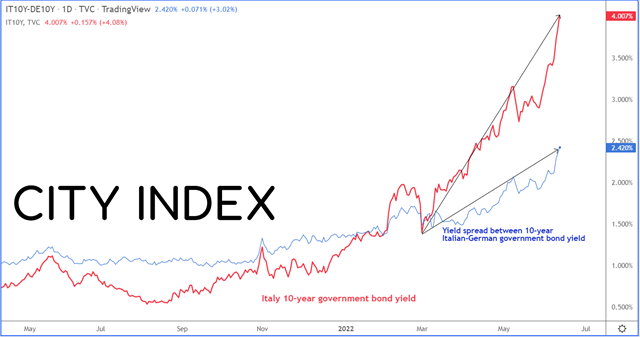 The negative sentiment in Europe is due to many reasons, made worse by the fact the ECB is forced to raise interest rates despite the war in Ukraine and a poor economy – especially Germany.  The ECB is joining a growing number of central banks in admitting the need for ‘more forceful’ monetary tightening to address surging inflation around the world. As real interest rates continue to be driven higher, this is providing consistent headwind for stocks, gold and currencies of energy importers – not least the Japanese yen and Turkish lira. The euro has also struggled because of two reasons. First, the ECB was not as hawkish as some had expected, as it promised a 25-basis point hike in July the day before. Not that the Eurozone economy is overheating, but because inflation is soaring and something must be done about it, potentially at a cost of triggering a recession.
This brings me to point number two. Worryingly, eurozone interest rates rose further following the ECB’s meeting last week, with the weak link being the peripheral debt markets. These markets are being left unprotected, traders fear, because as the ECB stops buying government bonds, their yields are likely to continue higher, which is raising alarm bells. So, the big talking point right now and a major risk facing Europe is fragmentation risks.
So far, there is no anti-fragmentation support packages from the ECB. The fact that it is letting it slide and simultaneously raising interest rates for the first time in over a decade in July, investors are worried that the cost of financing debt-laden countries will rise sharply, potentially turning into another debt crisis. This is why the EUR/USD has fallen below the 1.05 handle.

You can trade with City Index by following these four easy steps:
Open an account, or log in if you’re already a customer
Search for the company you want to trade in our award-winning platform
Choose your position and size, and your stop and limit levels
Place the trade
Related tags: Trade Ideas Stocks Dollar Forex Crypto 10 Index Yields