It’s easy to predict things will have to get a lot worse before they return to any semblance of ‘better’.

On Thursday though, having been positioning for a grand finale of the latest episode in Britain’s political epic, the main question for traders was whether a sense of anti-climax is the bigger risk. Any remaining doubts that May has accepted her political demise was erased with the revelation that a debate of the new, improved, withdrawal agreement initially planned for in the first week of June, was absent from the list of items to Parliament will cover that week.

Yet having ground to a fresh four-month low of £1.2605 at the European open, the pound rose for four hours, last standing at £1.2637. Admittedly, the perception of an imminent change at the top alone might be what’s lightening sentiment a bit after rapid-fire events of late. The pound, still the best reflector of how markets perceive Britain’s economic prospects, destroyed most consensus ranges laid down since August. In other words, regardless of any marginal lift on Thursday morning, traders have priced serious economic consequences back in for May’s probable exit.

That said, there’s still a for now enough of a distance between current prices and 2nd January ‘spike low’ at $1.2373 to keep the biggest bears in check, even if an almost 3% slump this month shows there has been little reason for the bulls to charge either. A continuing barrage of weighty  headlines will keep any buyers on their toes. The final destruction of sterling’s promising range so far this year, like Theresa May’s departure, looks like a matter of ‘when’, not ‘if’.

Other key headlines on Thursday 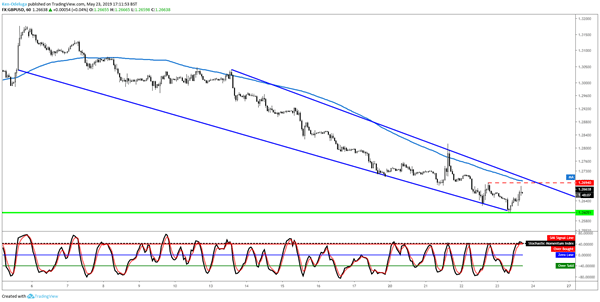