Sentiment towards risk has been positive in the first half of today’s session. This has been evidenced by rising European stocks and US futures and falling safe-haven gold and silver prices as bond yields resumed their ascend. Bitcoin extended its rise to climb north of $42K. In FX, euro crosses led the gains, the dollar traded mixed, and yen weakened again. As we head toward the start of North American session, the focus will slowly shift to speeches by central bank heads of UK, Eurozone and US.

What is driving the markets?

There are not many catalysts driving asset prices right now. The Ukraine conflict is no longer having the same impact on asset prices as it did when the invasion first started. Indeed, Russia’s test-firing of an intercontinental ballistic missile with nuclear capabilities failed to send oil or gold prices rocketing.

So, investors have been looking elsewhere for direction. They have welcomed the performance of Macron versus far-right nationalist Marine Le Pen in the French election debate ahead of Sunday’s vote. With Le Pen falling behind in the polls, investors have been pricing out the risks of a far-right government forming at Europe’s second largest economy. They have consequently been buying dips in stocks, which is why the CAC has led Europe higher with a gain of 1.5 percent.

The Euro Stoxx 50 index is meanwhile trying to break its bearish trend line after successfully recapturing and building a base around its pre-pandemic high of 3870 in the past few days: 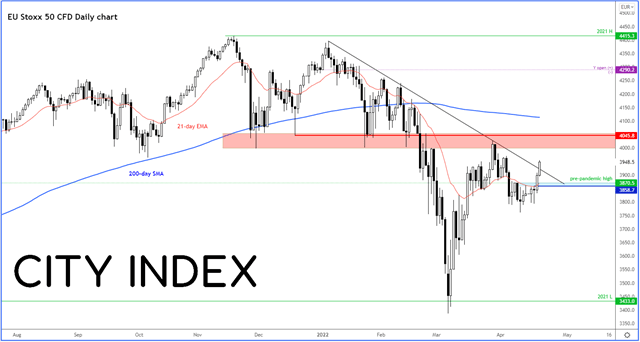 Macron’s lead in polls has also helped to lift the euro, although the performance of the single currency is more likely to do with the fact that ECB officials are turning hawkish. Traders are betting that the ECB will lift interest rates above zero before year-end, pricing in about 3 rate increases. We have heard a few hawkish remarks from several ECB policymakers of late, including Governing Council member Pierre Wunsch and colleagues Luis de Guindos, Martins Kazaks and Joachim Nagel.

Why is the ECB getting hawkish?

In short, because of the same reason all other central banks are getting hawkish: surging inflation. Although revised figures showed Eurozone CPI was +7.4%, a touch weaker than previously estimated, it is still a record high. With ECB officials turning hawkish and inflation becoming hotter, the era of negative rates is going to be over soon. By December, money markets are pricing in 75 basis points of interest rate hikes to +0.25% from the current -0.5% interest rate. This compares with less than one 0.25% increase at the start of the year.

EUR/CHF may have bottomed

Given the rising rate hike expectations in eurozone, I am expecting the EUR/CHF to rise over time, as the Swiss National Bank is unlikely to hike rates any time soon. So be on the lookout for any dip-buying opportunists in this currency pair. 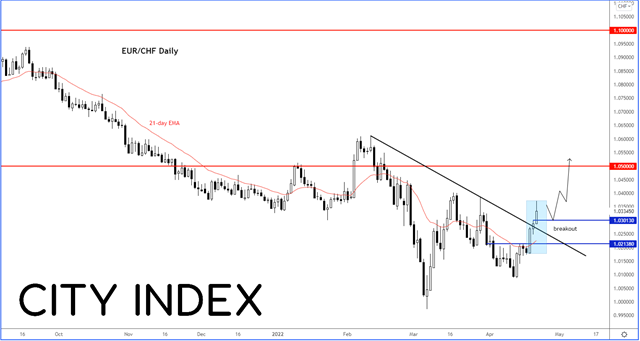 All the major market talks will be centred around inflation and interest rate hikes in the coming months. So, watch out for any pickup in hawkish rhetoric from Federal Reserve Chair Jerome Powell European Central Bank President Christine Lagarde and Bank of England Governor Andrew Bailey, who will all be speaking later this afternoon. Meanwhile, with macro data a little quieter, earnings will remain in focus after Tesla reported better-than-expected first-quarter results last night, buoyed by strong demand for its electric vehicles.