Powell said it- Not considering 75bps rate hike! Do markets believe him?

Inflation is skyrocketing.  Next week the US will release April’s CPI print.  Recall that the March headline print was 8.5% YoY vs a February reading of 7.9% YoY.  This was the highest reading since December 1981. The core CPI for March was 6.5% YoY vs February’s reading of 6.4% YoY. This was the highest core CPI reading since August 1982.  Today, the US released the Q1 labor costs in the US Nonfarm business sector.  The headline print was 11.6% vs an expectation of 9.9% and only 1% in Q4, 2021.  Again, this is one of the highest readings in 20 years. Tomorrow the US will release Nonfarm Payroll Data.  The Fed will not only be watching the headline print, which is expected to be +395,000, but also the Average Hourly Earnings, which is expected to rise by 0.4%.

What are non-farm payrolls?

At yesterday’s press conference following the FOMC’s 50bps rate hike, Powell said that inflation is much too high.  (See our complete FOMC recap here.)  Powell began his press conference by addressing the American people directly regarding inflation, saying “we understand the hardship it is causing, and we are moving expeditiously to bring it back down”.  Given the recent economic data and recent comments from Fed’s Bullard (who is extremely hawkish) and the initial comments from Powell in his press conference, the market became giddy with the possibility of a 75bps rate hike.  However, just a few minutes later, Powell confirmed that “75bps isn’t something the FOMC is actively considering”.  And with those comments, the air was let out of the balloon for US Dollar bulls.

But do the markets believe him?  USD/JPY sold off aggressively once it was announced that 75bps was not on the table, from a high of 130.37 down to a low of 128.62.  However overnight, the pair has reversed and taken back all of yesterday’s losses! On a daily timeframe, the long-term trend in USD/JPY is still higher. The pair began moving aggressively higher in March and has recently formed a flag formation with the RSI in overbought territory.  After the breakout of the formation, price began its move towards the target of 134.75.  However, the USD/JPY is consolidating once again in another corrective formation. If the pair closes above 130.13, price will have formed a bullish engulfing pattern, an indication that USD/JPY may be ready to continue its move higher.  The first level of resistance is at the April 28th highs of 131.25.  Above there, horizontal resistance crosses at 131.84 and again, just above the flag target, at 135.16.  Support below isn’t until yesterday’s low at 128.62 and then the lows at the bottom of the flag pattern near 126.94. 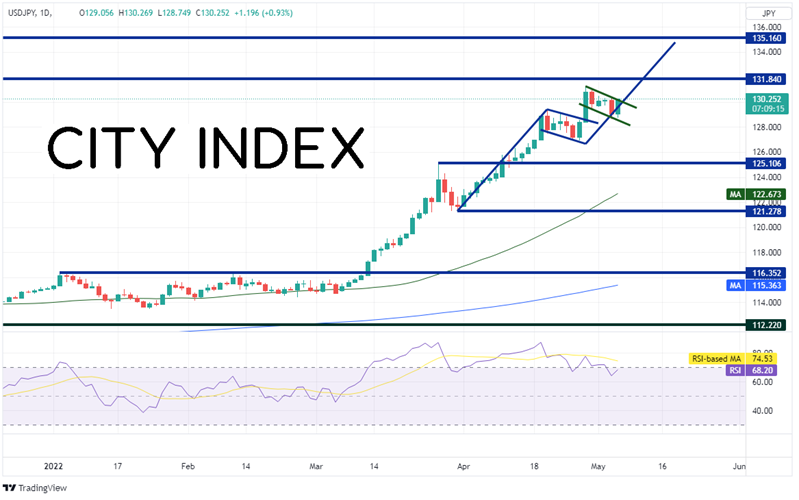 A 75bps rate hike is something that the Fed is not actively considering.  Do the markets believe Powell?  Based on today’s price action so far, it doesn’t seem like they do!  Watch for continued volatility with US Non-Farm payrolls tomorrow.