Last weekend’s Australian Federal election and the implications of RBA Governor Philip Lowes speech on Tuesday, provided a welcome distraction for traders in the early part of this week. However, the focus has now returned to how the recent escalation in U.S.- China trade tensions will be resolved and in the interim, how it will affect markets.

The impact of a prolonged trade war is well documented, including reduced international trade, lower economic growth, higher inflation and higher unemployment. It is under this shadow that all markets are currently operating, including crude oil.

In late April, crude oil rallied to a high of U.S. $66.60 after the Trump administration said it would not reissue sanction waivers (once they expired on May the 2nd) which previously allowed some countries to import Iranian oil. Of course, this went against the Trump administrations stated desire for a lower oil price and in response, OPEC stepped in to increase production.

OPEC sought to avoid their mistake from October last year, when the price of crude oil fell over 40%, as a result of increased production into a softer than expected market. This time around, OPEC’s attempts appear to have been better managed. Not even a barrage of hostile barbs exchanged between the U.S. and Iranian administrations were enough to budge crude oil from its sleepy trading range in the low $60’s.

However, the overnight release of inventory data by the Energy Information Administration (EIA) which showed crude supplies rose for a second week in a row, has resulted in crude oil closing the day -2 ½% lower.

Technically, the overnight fall has created a negative backdrop. This is because in an Elliott Wave framework crude oil since the the 6th of May appears to have traced out a completed and corrective “abc pattern” as viewed on the chart below.

In summary, given the prospect of softer demand for crude oil as the U.S.- China trade war drags on and the technical backdrop outlined above, the crude oil price is expected to fall further in coming weeks. 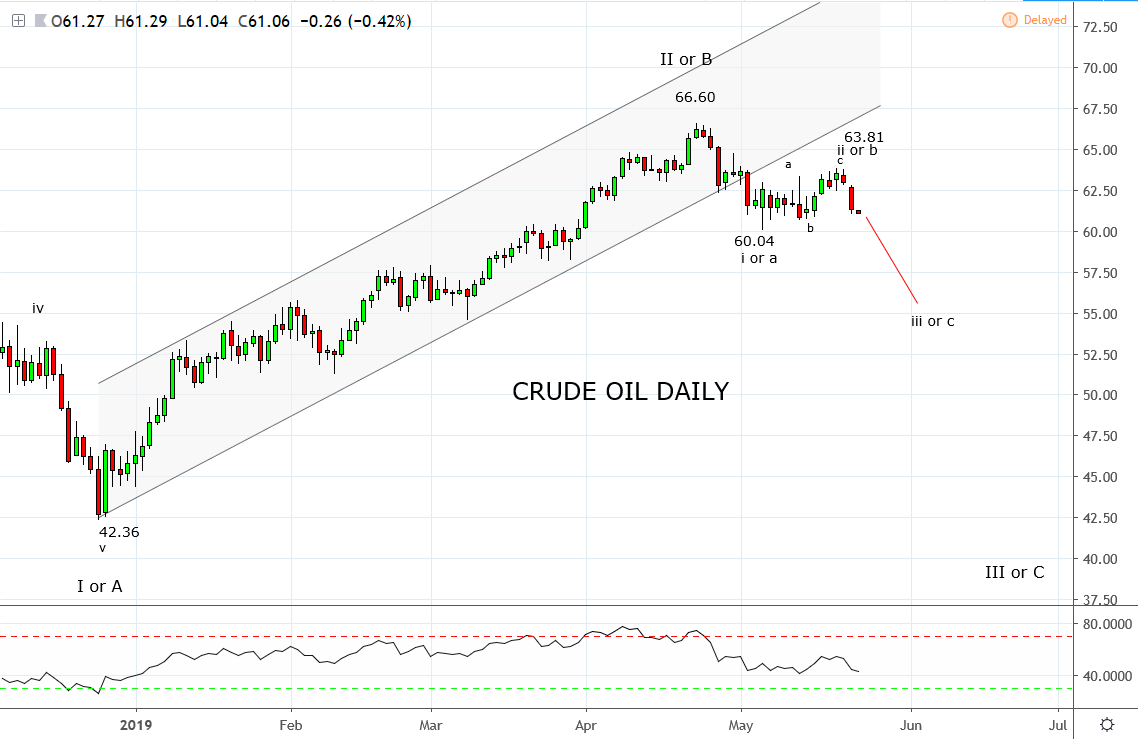 Source Tradingview. The figures stated are as of the 23rd of May 2019. Past performance is not a reliable indicator of future performance.  This report does not contain and is not to be taken as containing any financial product advice or financial product recommendation

US open: Stocks rise as corporate earnings heat up
By:
Fiona Cincotta

Crude oil off lows after slump
By:
Fawad Razaqzada