The price of crude oil rose again in this first half of Tuesday’s session, now up for the fifth consecutive session. Both Brent and WTI contracts briefly topped $115 per barrel before easing back a little. As oil prices go up, down go currencies of oil importing nations. The Turkish lira is among the most vulnerable. 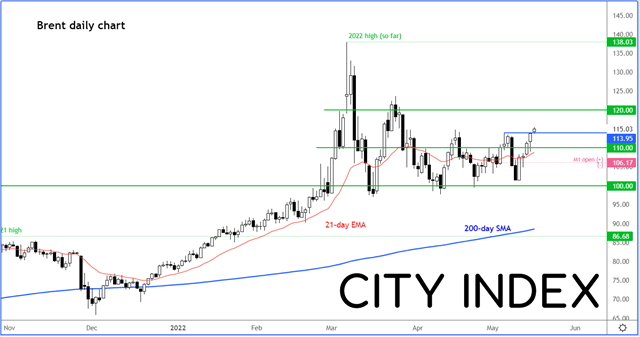 The OPEC, on its part, are doing absolutely jack all in trying to “balance” the oil market. The OPEC+ compliance continues to rise despite the easing of its output caps. In April, compliance with its oil output cuts rose to a whopping 220% from 157% in March. The group is now producing 2.6 million barrels per day below the required level. Russia produced some 1.28 million bpd below its own required level in April.

Given the demand inelasticity of oil prices, rising prices have not destructed demand. Demand did fall briefly when China went into a lockdown but now with Shanghai emerging from lockdowns and other cities are likely to follow suit, demand should remain elevated. In the US, the driving season is going into a higher gear, which should mean higher demand for gasoline.

Ultimately, this is a supply-side story. Unless the OPEC and its allies ramp up production and fast, it is difficult to see how prices can go down meaningfully. Five or $10 just won’t cut it.

Rising oil prices have been great news for oil producers and bad for almost everyone else. Inflation is one of its by-products, which continues to soar globally.

Turkey has been hit hard because the country relies heavily on imports. Due to these external factors and past mismanagement of the economy, inflation is running at annual rate of nearly 70%, at least officially anyway.

As mentioned, energy and some commodity prices are continuing to be impacted by Russia’s invasion of Ukraine. On that front, talks between the two sides are not taking place 'in any form.' Russia's deputy foreign minister, Andrey Rudenko was quoted by Interfax as saying: "No, negotiations are not going on. Ukraine has practically withdrawn from the negotiation process."

Asa result, the Turkish lira has extended its falls for 9th day against US dollar, down another 2%, as soaring oil prices pushes up the nation's hefty import bill, adds to its inflation woes and increases

default risks. Against this fundamental backdrop, you can’t help but feel the lira will come under more pressure, unless something changes dramatically.

One other potential source of support could be from holidaymakers this year. As the weather improves and lira sinks, demand for tourism should go up. But will it be enough to cause a reversal in the lira’s trend remains to be seen. 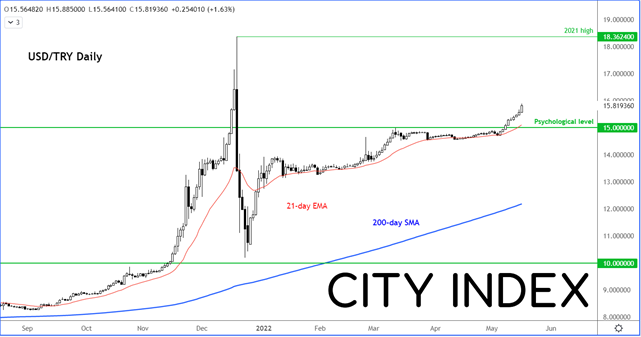