I am going to state something that might sound a bit controversial about Friday’s US monthly jobs data, before we get into the details of it. It is this: I just don’t think the market is not going to care too much about this month’s non-farm payrolls report. Regardless of the outcome, I just can’t see how or why the dollar will move sharply because of the data release. After all, employment is no longer in focus. It is all about the Fed’s other mandate: inflation.

Surging inflation and weakness in economic growth have been the story of 2022 so far. More recently, worries about the latter has leapfrogged the former. The market has started to price in a recession. Yield curves have inverted. Commodities have tanked. The dollar has roared higher against all major currencies.

Fed’s focus is no long on employment

The Fed will not want to focus away from inflation, just yet. But it too knows that the economic outlook is going to deteriorate with its aggressive hiking. Indeed, according to the minutes of its last policy meeting, the FOMC has admitted that "with inflation remaining well above the Committee's objective, participants remarked that moving to a restrictive stance of policy was required to meet the Committee's legislative mandate to promote maximum employment and price stability." The minutes revealed that policymakers at the Fed had 'concurred' that inflation outlook had deteriorated, and “many on FOMC saw significant risk of entrenched inflation.”

Against this backdrop, the Fed is going to hike rates by at least 50 basis points at its July meeting, but 75 appears more likely. Markets are pricing in a 90% probability of a 75bps hike, attaching less than 10% chance for a 50bps hike. Friday’s jobs report is not going to change that outlook.

One month is not a trend

I reckon that any surprise weakness in employment isn’t going to deter the Fed from its hawkish path, since it is determined to create a soft landing to bring down inflation. After all, the Fed likes to see a trend before making a change in policy. One month’s worth of data isn’t going to change their outlook about the labour market.

All the said, the dollar will probably move sharply in the short-term outlook in reaction to the data release, but it won’t matter in the grand scheme of things. It is likely to react more profoundly if the data beats expectations. Here’s what economists are expecting to see on Friday:

The employment sub index in the Manufacturing PMI contracted for a second straight month. It came in at 47.3, some 2.3 percentage points lower than the 49.6 percent recorded in May.

The employment sub index of the services PMI contracted, by 2.8 points to 47.4 down from 50.2 in May

The weakness in employment components of the ISM manufacturing and services PMIs point to a potentially disappointing jobs report. But as mentioned, the NFP is becoming less and less relevant for the markets as the focus has turned to inflation and economic growth than employment. Thus, the only thing that will matter from the jobs report is the wages bit. Workers will be demanding higher pay to keep up with inflation. Watch average earnings for upside surprises, as the market will put more emphasis on it this time.

Ahead of the NFP, the greenback has reached its highest point since 2002 against a basket of foreign currencies, driven by weakness in the EUR/USD which has also fallen to its weakest level since 2002.

Will the release of NFP trigger another sharp slump in EUR/USD to parity? 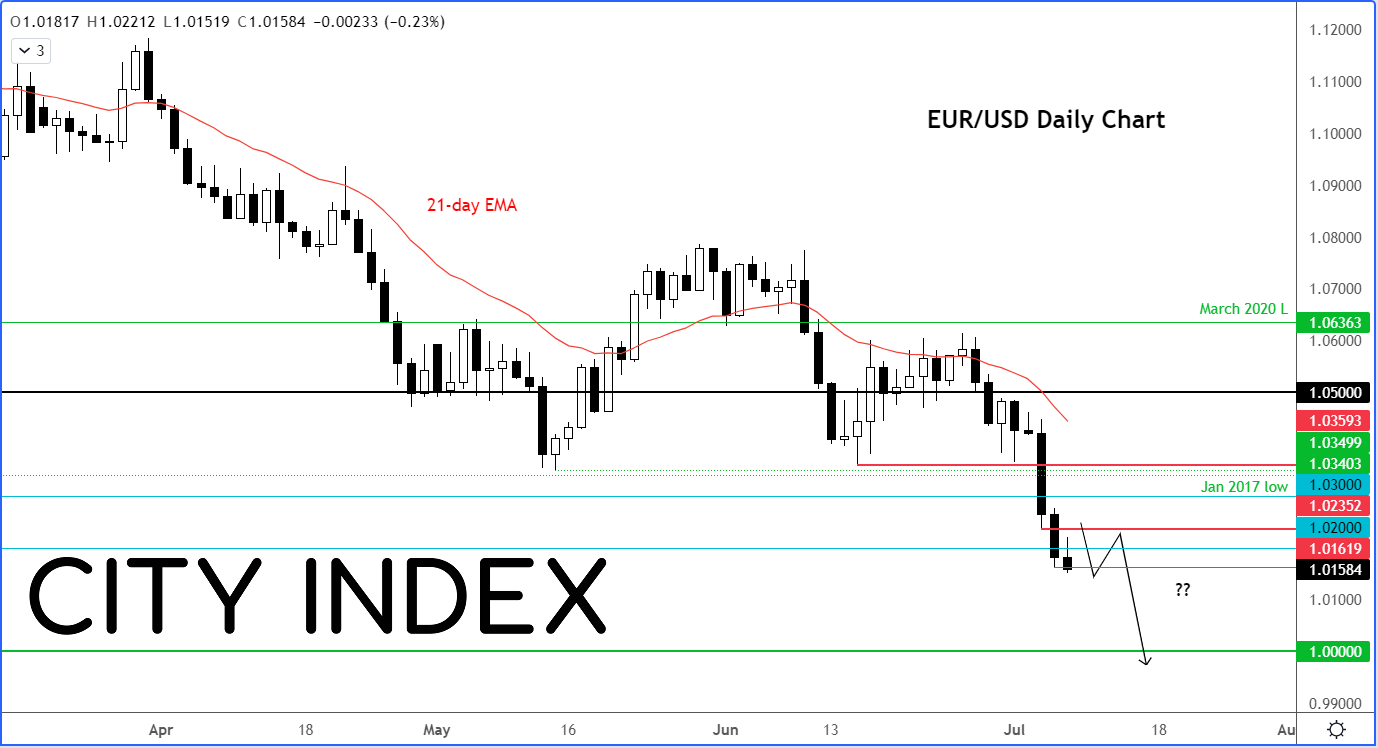