NFP preview: Will the jobs report tip the scales on the Fed’s decision next month?

It’s like a geeky monetary policy riddle: How can a central bank raise interest rates, but be further away from where interest rates are expected to finish the year?

As almost universally expected, the Federal Reserve’s FOMC raised interest rates by 25bps at its March meeting, but the associated economic forecasts and recent market developments have prompted traders to price in the equivalent of another nine(!) 25bps interest rate increases by the end of the year, up notably from the roughly five 25bps hikes that were expected at the start of March.

While many of the factors driving the expected tightening stem from outside the US, the ongoing strength of the US labor market is certainly playing a role as well. In that vein, traders and economists are expecting to learn that nearly another half-million net new jobs were created in March, with average hourly earnings expected to rise by 0.4% month-over-month: 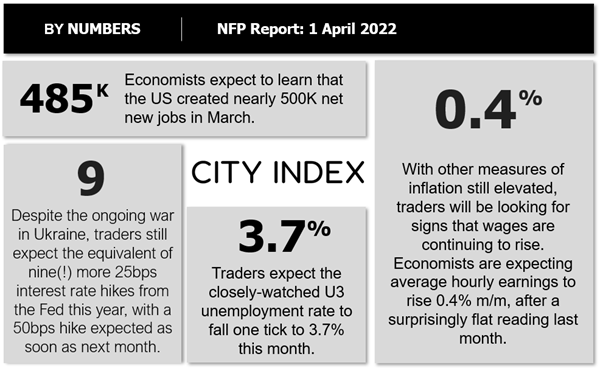 Notably, this release will be the final NFP report before the next Fed meeting in early May, where traders are currently split between expecting another 25bps interest rate hike and a 50bps “double” rate increase; accordingly, this jobs report may tip the scales in favor of one path or the other, with potentially big implications for the forex market and beyond.

Are these expectations justified? We dive into the key leading indicators for Friday’s critical jobs report below!

As regular readers know, we focus on four historically reliable leading indicators to help handicap each month’s NFP report…but due to the vagaries of the calendar this month, we only have two of these “leading” indicators available before the release:

As a reminder, the state of the US labor market remains more uncertain and volatile than usual as it emerges from the unprecedented disruption of the COVID pandemic (and that’s even when we do have the full slate of leading indicators!). That said, weighing the data and our internal models, the leading indicators point to roughly in-line reading in this month’s NFP report, with headline job growth potentially coming in somewhere in the 375-475K range, albeit with a bigger band of uncertainty than ever given the current global backdrop.

Regardless, the month-to-month fluctuations in this report are notoriously difficult to predict, so we wouldn’t put too much stock into any forecasts (including ours). As always, the other aspects of the release, prominently including the closely-watched average hourly earnings figure which surprisingly was unchanged (0.0%) last month.

The US dollar index mostly held its ground in March, carving out a well-defined range between 97.75 and 99.25 after a big rally through the month of February. After a month of consolidation, there’s no strong directional bias for the world’s reserve currency heading into this jobs report, though it does remain in a longer-term uptrend, suggesting that traders may be eager to buy short-term dips.

As for potential trade setups, readers may want to consider EUR/USD sell opportunities on a strong NFP reading after the world’s most widely-traded currency pair retraced to previous-support-turned-resistance in the mid-1.1100s. The unit remains in a longer-term downtrend, so a optimistic jobs report could reinvigorate bears.

On the other hand, a soft jobs report could present a sell opportunity in USD/JPY. The pair may have seen a “blowoff top” up to 125.00 earlier this week, and after surging through the past three weeks, may be vulnerable to profit-taking if traders start to rein in their expectations for US interest rate increases this year.