In a rambling press conference living up to his “cover-all-bases” legal training, Powell noted that there was “an insurance aspect” the yesterday’s rate cut and that it was a “mid-cycle adjustment” not the start of a long series of rate cuts. However, he also emphasized that it wasn’t a one-and-done decision, suggesting traders could still see another interest rate reduction (or two) in the coming months (quarters?).

For a market that’s become accustomed to having a strong read on the Fed’s plan in advance, traders are in the dark once again, with the CME’s FedWatch tool currently showing 68% odds of a follow-up cut in September. Given traders’ mixed opinions for next month, the next two NFP reports will be a major factor driving Fed policy, and by extension, market movements.

Due to the vagaries of the calendar, one of the best “leading” indicators for NFP, the ISM Services PMI report, will not be released until Monday, leaving us with three primary leading indicators to watch:

On balance, these leading indicators point to another solid month of job growth, with a reasonable forecast above expectations in the 170-190k range. That said, the month-to-month fluctuations in this report are notoriously difficult to predict, so we wouldn’t put too much stock into any forecasts (including ours). Most importantly, readers should note that the unemployment rate and (especially) the wages component of the report will also influence how traders interpret the strength of the reading. 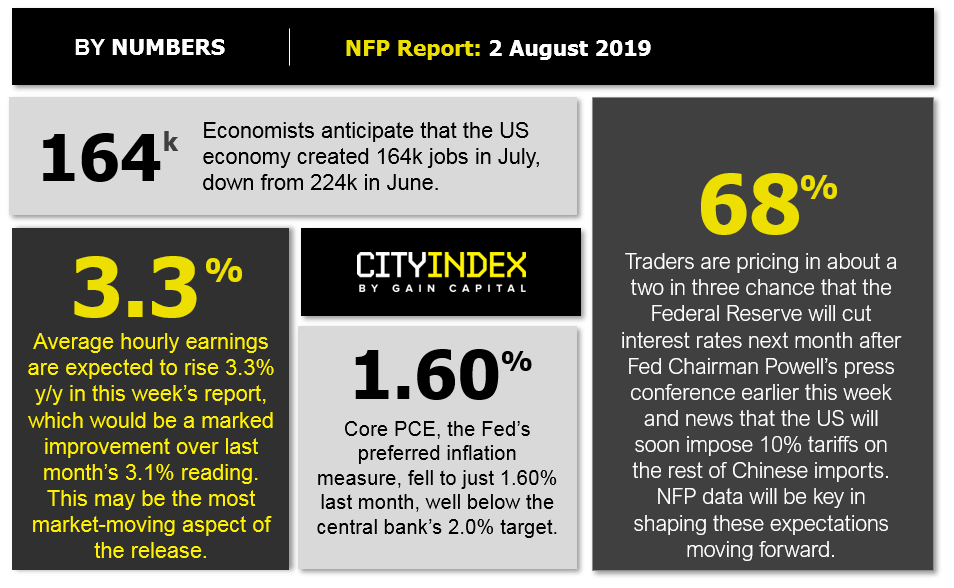 See wage and job creation scenarios, along with the potential bias for the USD dollar below:

In the event the jobs and the wage data beat expectations, then we would favor looking for short-term bullish setups on the dollar against the likes of the British pound given the ongoing Brexit uncertainty in the UK. But if the jobs data misses expectations, then we would favor looking for bearish setups on the dollar against a currency like the Aussie dollar, as it could serve as a catalyst for more “risk on” sentiment, especially with the pair testing major support in the 0.6850 area.