Imperial Tobacco, the world’s fourth largest cigarette maker, announced today that first quarter revenues grew by 2% to the end of December 2012, but deteriorating performance in Europe and Russia at the end of the quarter and into January – thanks in part to higher competition and sales of black market cigarettes – would mean that H1 (first half year) performance would see falling profits.

The performance in Europe dragged on brighter performances in other key growth markets for the firm such as the Middle East, Africa and Asia. In these regions, revenues grew by 12% and volumes increased by 10% for key brands such as Davidoff.

The tobacco firm tried to reassure shareholders that full year performance would however meet expectations.

A key now for investors is this – do we believe them?

Second half year performance is predicted to account for 55% of the firms total annual profit so there is absolutely room to recover. However, performance in Europe and Russia is particularly concerning given the economic headwinds are unlikely to see consumers change a growing habit of sourcing cheaper cigarettes. In the EU, the firm estimates that the legal cigarette market size is down 7%.

The real answer here depends on how quickly the firm can grow outside of Europe. They are accelerating their cost efficiencies, which are expected to help fund growth in key target markets in Africa, Asia and the Middle East throughout the year.

So Imperial Tobacco is in a fight. A fight against declining volumes and sales in Europe thanks to economic headwinds and black market sales, vs accelerating cost efficiencies and maximising the opportunities key brands such as Davidoff, Gauloises and JPS can take advantage of outside of Europe.

Imperial Tobacco has already taken a £1.2bn hit by writing down the value of its business in Spain, where 26% of adults are unemployed and the country fell deeper into recession in its third quarter by -1.6% on an annual basis.

Share prices fell 3% immediately after the firm reporting their figures this morning, testing support levels at 2350p. A close below this level see’s the bears target 2240p, which is close to the bottom of the firms 18 month trading range. 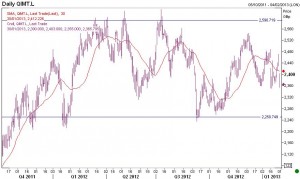