Is the Kiwi ready to outperform the Aussie? AUD/NZD

The RBA hiked interest rates earlier today by 50bps to bring the cash rate to 1.85%.  However, the Aussie sold off as the RBA said that although it still plans to raise rates in the future, there is no pre-set path moving forward. In addition, the board noted that “the size and timing of future interest rate increases will be guided by the incoming data and the Board’s assessment of the outlook for inflation and the labour market”.  In other words, just like the ECB and the Fed, the RBA will not be providing forward guidance. See out complete RBA meeting recap here.

In a few hours, New Zealand will release its Q2 Employment Change.  Expectations are for in increase of +0.4% vs a Q1 reading of +0.1%.  In addition, the Unemployment Rate is expected to drop from 3.2% in Q1 to 3.1% in Q2.  If the Unemployment Rate comes out as expected, it will be a new record-low for New Zealand. Note that on the RBNZ raised rates by 50bps for the third consecutive time on July 12th to bring its Official Cash Rate to 2.50%.  In addition, New Zealand’s CPI for Q2 was 7.3% YoY vs 6.9% YoY in Q1.

On a weekly timeframe AUD/NZD has been moving lower in an orderly channel since 2013 (green trendlines).  However, during the week of May 2nd, AUD/NZD broke above the top downward sloping trendline and above the highs from the week of August 17th, 2020. Since then, the pair has slowly continued to make higher highs and higher lows, taking out the highs from August 2018 near 1.1176 last week. 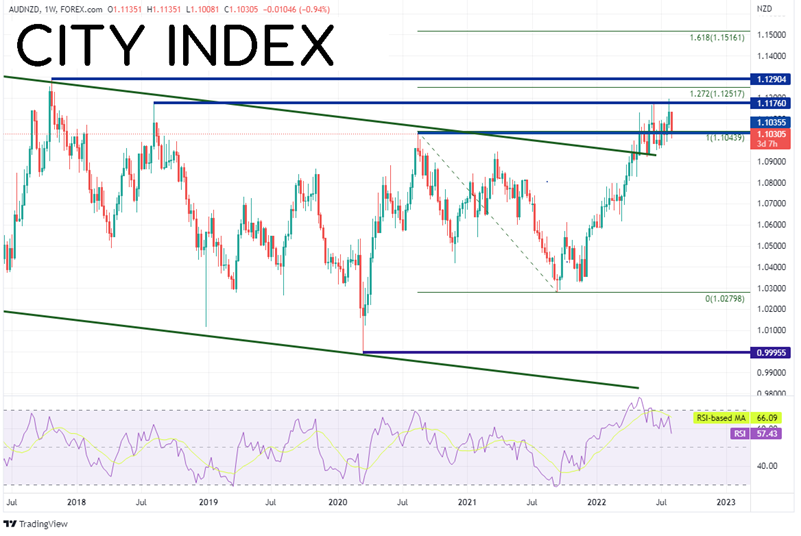 However, notice what is happening on the shorter daily timeframe.  AUD/NZD has formed an ascending wedge above the top trendline of the long-term channel (green trendline) but has spiked below it today. (As of the time of this writing, price has moved back inside it wedge.)  In addition, notice that price has made a series of 3 higher highs, while the RSI has made a series of 3 lower highs.  This is often a sign of a reversal.  If AUD/NZD does continue to move lower, the next support below the bottom rising trendline of the ascending wedge is the top downward sloping trendline of the long-term channel (green) near 1.0925.  The target for the break of an ascending wedge is a 100% retracement.  This is also the next support level at 1.0825.  If the current support holds, the first resistance is at the July 27th spike highs to 1.1198.  Above there AUD/NZD can move to the 127.2% Fibonacci extension from the highs of August 2020 to the low of September 2021 near 1.1252, then highs from 2017 at 1.1290. 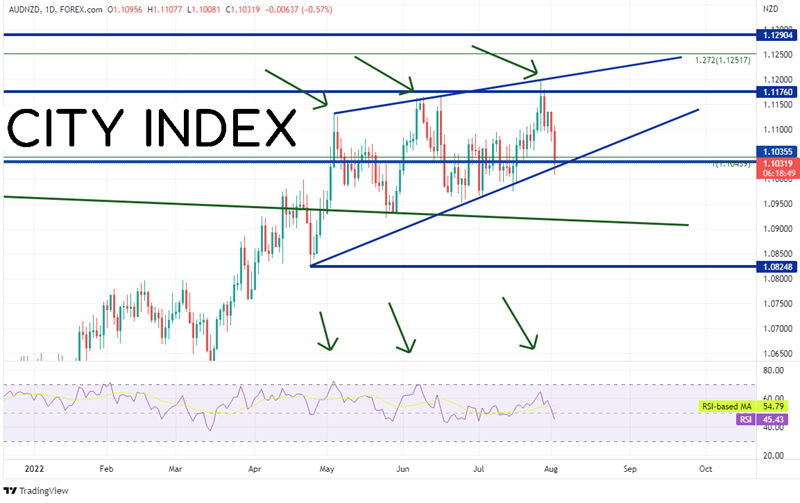 Though the RBA hiked rates 50bps, it also served up a less hawkish statement than expected at its August meeting, causing Aussie to come off.  New Zealand is due to release its Q2 Employment data in a few hours.  If the jobs report is stronger than expected, will it be time for the Kiwi to lead the Aussie?  The daily technical chart of AUD/NZD looks like its possible.  Watch today’s lows for confirmation of a breakdown out of the rising wedge.