Risk appetite has made a comeback just as we head into the end of Q3. With indices, yields and copper rallying, the oppressive forces Trump’s trade war has held over markets has been lifted, allowing markets to rebound like a jack in the box. There’s still no guarantee these talks will lead to anything, and there’s certainly a case to be made that China has tactically pushed talks into October to help markets rally through to China’s 70th anniversary on October 1st. But right now, who cares? It has lifted a bad spell and allows markets to cover shorts, regroup and refocus their energies.

With Indices having broken out of their ranges, we’re looking at the relative performance of popular indices via ratio analysis. Whilst it can be used as an intermarket tool (and help sort out the strong from the weak) it can also be used for a pairs trade (where a trader goes long on one market and short another, in order to profit from the ratio and hedge out market risk).

Here we have a matrix*, which shows 13-week % returns of index ratios. For example, we can see that Nasdaq/S&P500 ratio has increased by around 1.9% over the past 13 weeks and the FTSE/CAC ratio has fallen by 5%. Whilst raw percentage returns don’t account for what has happened in between the 13-week points, the matrix quickly shows the relative performance of 64 tradable ‘pairs’ and makes a good starting point before opening a chart.

We can see the Nasdaq has been a strong contender against its peers the past rolling quarter, so this will remain on the bullish watchlist. Conversely, the Hang Seng has underperformed against its peers, so Nasdaq/Hang Seng could be a ratio to watch. Here are a couple of ideas generated from the table.

The Nasdaq/Hang Seng ratio is in a multi-year uptrend and accelerating away from its bullish trendline. Whilst it may be approaching a level of over-extension on the weekly chart, there’s no obvious signs of the top just yet. The daily chart is also in a strong uptrend and prices are coiling around their highs in a potential symmetrical triangle pattern. If prices are to break higher, bullish continuation is assumed. Whereas a notable break lower could suggest a correction is underway, or perhaps the beginning of a top. For now, the bias is for a bullish breakout.

The weekly chart is in a strong upwards move, after breaking above its correction line in May. On the daily chart, there’s a potential bull-flag (also reminiscent of a bullish wedge, but a potential continuation pattern none the less). A break of the retracement line could signal the ratio is ready to continue its strong uptrend. 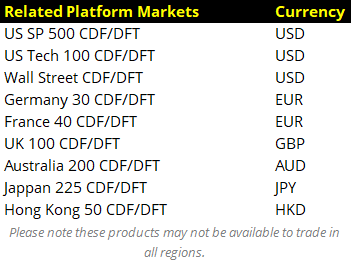 * Please note, the individual markets within the ratio charts are in their base currency. This is something to consider if trading them via CFD’s, as currency risk could be introduced. Under this scenario, one may want to consider hedging with an FX position, depending on which pair they trade and what currency their account is denominated in.