Gold looking to extend rally as yields and dollar retreat

By :
Fawad Razaqzada
,  Market Analyst
The new week has started how the last one ended for FX and precious metals, ahead of a busy week. By midday in London, gold was up for the fourth day, and third week, while silver was up for the fifth consecutive session. The US dollar index was a touch weaker after falling in the previous two weeks. Will we see precious metals make further ground this week?

In part, it all depends on the US dollar, which for now has retreated further after the Fed hiked interest rates by the expected 75bps last week and said that rate decisions moving forward will be on a meeting-by-meeting basis. With several key commodity prices falling and incoming data also being mixed at best, bonds have also rallied, causing their yields to dip further from the June 15th peak as traders speculated that we may have already reached or about to reach peak inflation, although undoubtedly recession fears were also a big reason for this. Much of the front-loading of interest rate hikes by central banks will soon be completed and we may also go back in a rate-cutting environment in as early as the first half of 2023. With markets being very forward-looking, the prospects of real yields remaining in negative helped to underpin low-yielding assets like gold, silver and Japanese yen.

Keep an eye on US macro pointers

Gold investors will need to keep a very close eye on US macro pointers this week given the fact that the Fed’s decisions on the size of future hikes will be driven by incoming data. Among the highlights, we have the following list of data to keep an eye on: 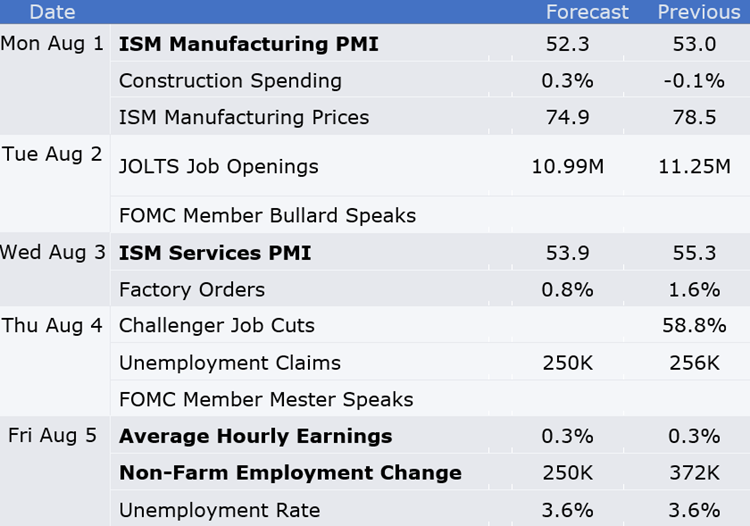 Last week was a mixed one for data with GDP, CB Consumer Confidence and New & Pending Home Sales all missing expectations quite badly, while personal income and spending were among the forecast-beating numbers. Core PCE price index and Employment Cost Index, gauges for inflation, also beat. But it was that GDP disappointment that seem to have triggered the bond market rally as investors speculated that the Fed will now have to slow down the pace of the hikes and potentially go in reverse in early 2023. 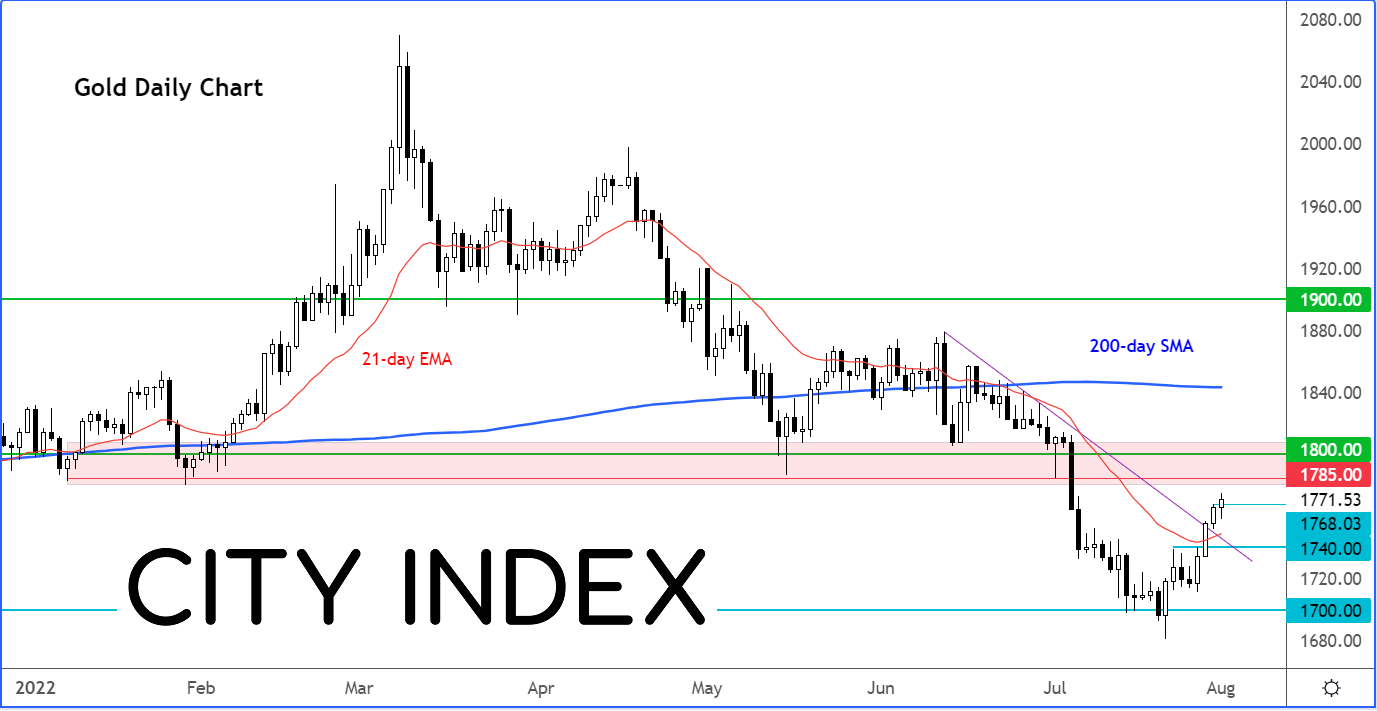 Gold’s break above its short-term bearish trend line is certainly another bullish technical development after the metal had formed a large bullish engulfing candle a couple of weeks ago near long-term support at $1700. The fact that gold is also above its 21-day exponential moving average now is an indication that the short-term trend line is no longer bearish, although if you zoom out a little you can see that the longer-term technical outlook remains murky with the metal holding below the 200-day average.

Gold is also facing additional resistance between $1785ish and $1800ish. This is where is had previously found support on numerous occasions. If the bulls manage to reclaim this area, then that would be something significant.

As mentioned, do keep a close eye on US macro data that will be released throughout next week (see above table), as investors try to figure out the Fed’s next move. But in terms of the most important macro events, these are the three to watch:

Traders abandoned bets on a 75-basis point rate hike from the Reserve Bank of Australia after headline inflation came in slightly slower than expected at +6.1% rather than 6.3% expected. It looks like another 50bp rate hike is now on the agenda, but this is priced in already.

Bank of England’s “steady as she goes” approach to interest rate hikes (25 basis points) has been heavily criticized as inflation in the UK has surged to new 40-year high of 9.4%, causing the past weakness for the pound. Will it finally join the rest of central banks with a bigger hike of 50 basis points this time? There is the possibility that the GBP/USD could rise to 1.25 handle.

US jobs reports have not been having the same impact on the markets because the focus has been on inflation and the economy. But if we start to see weakness in employment again, then this will further worry investors about the health of the world’s largest economy.