Sometimes, a market becomes so oversold that it can rally even on unsubstantiated rumors or even outright bad news. That looks like it’s the case with GBP/USD today.

Over the weekend, The Telegraph reported that Boris Johnson would meet with Irish PM Leo Varadkar to discuss the Irish Backstop, arguably the single biggest obstacle to a mutually-agreeable Brexit deal. Understandably, cable rallied on these headlines, erasing most of Friday’s big drop to 30-month lows (it’s also worth noting that EUR/GBP hit a 10-year high at the same time).

Earlier today, a spokesperson for the Prime Minister’s office denied that report, declaring that no meeting between Johnson and Varadkar has been scheduled…but GBP/USD has nonetheless held onto its gains from the (since denied) rumors.

Technically speaking, it’s clear that GBP/USD was poised for a bounce regardless of the newsflow. The pair was testing the bottom of its five-month bearish channel, with a deeply oversold RSI, and nearly tagged key psychological support at 1.2000. After shedding nearly 500 pips in the last three-and-a-half weeks alone, we wouldn’t be surprised to see GBP/USD’s counter-trend rally extend further this week: 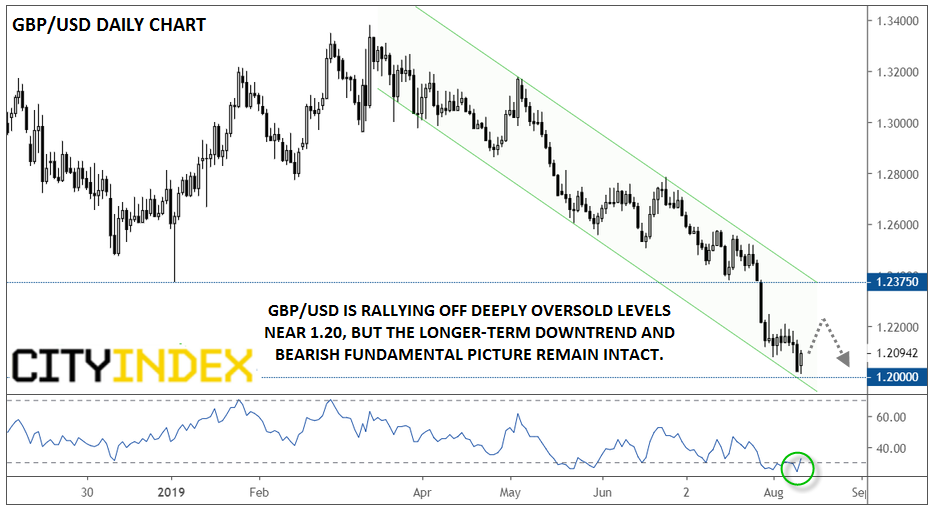 That said, the potential for a no-deal Brexit continues to weigh on the UK currency’s medium-term outlook, and for as long as that scenario remains in play, GBP/USD may struggle to hold any short-term gains. Bearish traders may look to sell into any rallies starting in the 1.2200-1.2300 zone if the near-term rally extends further.