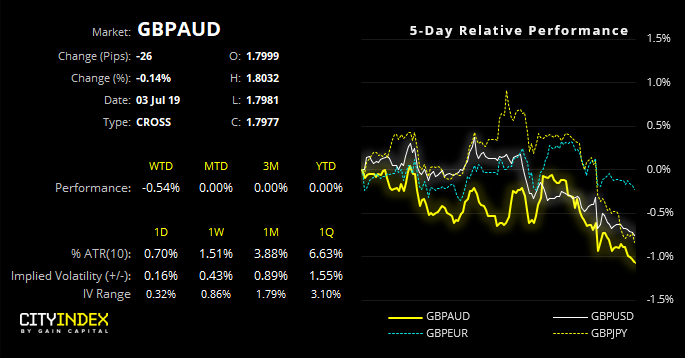 Over the past six sessions, GBP/AUD’s downside has persisted as part of a bearish swing trade. And, now seemingly on the cusp of breaking key support after creating a lower high, we suspect the larger, bearish reversal is indeed coming into play.

We highlighted previously that the rebound from July’s low lacked momentum, so we were looking for a bearish swing trade below the 38.2% Fibonacci level. However, given positioning among large speculators on GBP and AUD futures, we also flagged its potential for a larger, bearish reversal pattern to take form.

Just six session later, GBP/AUD has hit our first bearish target and appears set to break lower as part of a larger reversal. And with the British pound facing a fresh set of headwinds after Carney spoke yesterday, and a stubborn AUD after yesterday’s RBA cut, we remain bearish on GBP/AUD as part of our core view.