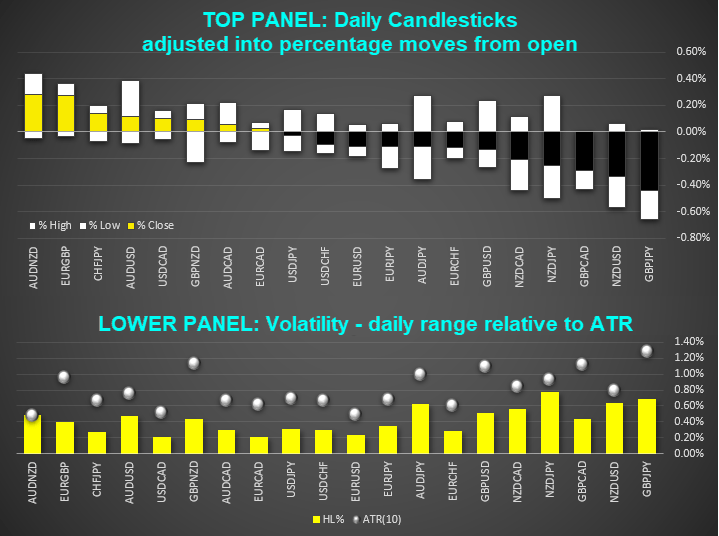 The Forex dashboard provides a pulse check on a broad selection of currency markets at a glance. Combining percentage moves with volatility for 20 FX pairs, it allows a trader to quickly assess money flow, sentiment and volatility on a relative basis. Whilst it doesn’t provide trade signals, it can be a valuable tool for a trader at the beginning of their session to help decide which charts to analyse first as part of their daily routine.

Each bar represents the current, daily candlestick of its respective market. However, it’s expressed in percentage terms as opposed to pips, which allows for an easier comparison between currency pairs. This means that each bar includes an open, high, low and close, just like a Japanese Candlestick or bar chart. Although in this case, the Asian open price is always fixed to zero and the high, low and close show the percentage change from the Asian open.

This allows us to monitor the following:

Traders can also apply traditional candlestick analysis to these bars. Just some examples or questions to use include:

This section directly compares the current daily high to low range against its 10-day ATR (average true range), in percentage terms. Its purpose is to quickly reveal which pairs remain within compression (daily range < ATR) and which have seen range expansion (range > ATR). 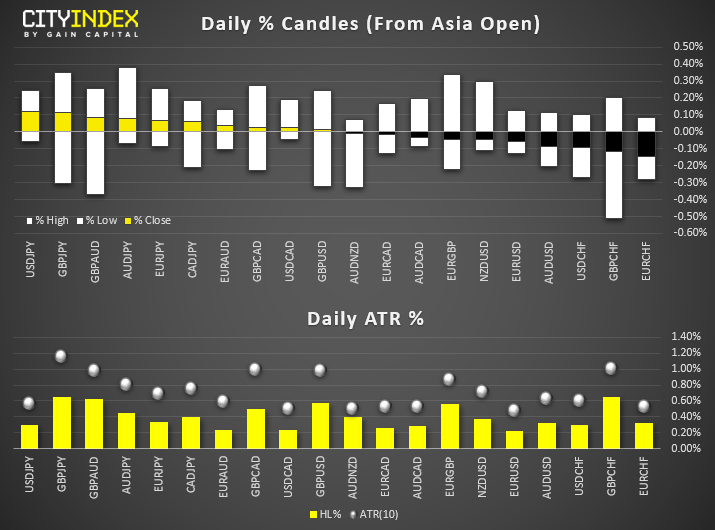 At a glance we can see that dojis (indecision candles) have formed across the board, with a series of long wicks above and below narrow-ranged bodies. Additionally, we know they’re relatively small-ranged dojis as all pairs are below their typical daily ranges.

This scenario tends to occur in two ways: