FOMC Preview: Not two, but four potential outcomes for markets

Like a kid on Christmas Eve, traders are hyper-anxious for tomorrow’s big festivities. Unlike Santa Claus, who doles out presents based on whether children have been naughty or nice, Dr. Yellen may deliver an exciting present or a big lump of coal depending on how you’re positioned heading into the event.

For months now, traders have been see-sawing between anticipating a rate hike in this week’s meeting and the December meeting (with a small minority expecting a move in the FOMC’s generally minor meeting in October). However in our view, there are at least four potential outcomes from tomorrow’s meeting, not the simply hike/no hike dichotomy that many expect. Beyond just the decision about interest rates, the central bank’s comments and economic projections will also impact the market’s reaction: 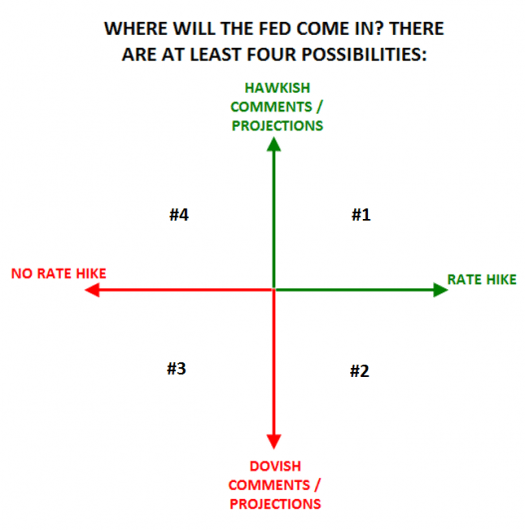 As we analyze each of these four scenarios, it’s worth mentioning that traders are pricing in just a 25% chance of a rate hike tomorrow, and even those that expect interest rates to rise anticipate that it may be a “one and done” increase for the next several months, rather than the onset of an aggressive tightening cycle.

In this first scenario, the Fed plows ahead, raising interest rates and implying that further rate hikes are still possible if the markets are stable. In addition to any hawkish comments to that effect in the press conference, this scenario would also show optimistic assumptions for GDP growth and inflation in the Fed’s Summary of Economic Projections (SEP). Most importantly, the “dot chart” of Federal Reserve presidents’ interest rate expectations will still show a significant minority of officials anticipating interest rates at 0.50% or higher at the end of this year.

This is our (and the market’s) lowest probability scenario, but many Fed policymakers certainly seem eager to start raising interest rates, so it’s worth keeping on your radar screen. Playing out this scenario, we would likely see a big rally in the US dollar, as well as meaningful drops in both the fixed income and equity markets.

This scenario is the so-called “dovish hike” that some analysts have been arguing for lately. With interest rates still at crisis lows, the FOMC voters desperately want to raise interest rates at least once so they have a “bullet in the chamber” to help stimulate the economy without resorting to QE in case of a future slowdown (convoluted, I know). This scenario would be characterized by subdued economic projections with a vast majority of voters’ “dots” anticipating interest rates in the 0.25-0.50% range at end-2015 and most expecting rates below 1.0% at end-2016.

In terms of market impact, this situation would likely play out similarly to Scenario #1: we would expect to see a knee-jerk rally higher in the dollar, and a selloff in bonds and stocks. These moves would likely be less dramatic than if we were to see Scenario #1 play out.

Scenario #3) No rate hike with dovish comments and projections

If the Fed holds back on raising interest rates and fails to provide hints that it still plans on raising interest rates this year, it would be a dove’s dream. In this case, Yellen and the FOMC statement would emphasize the low inflation figures, recent volatility in financial markets, and concerns about a slowdown in global growth. As for the SEP, the Fed’s projections would be revised generally lower, including the non-accelerating inflation rate of unemployment (NAIRU), meaning that the current low unemployment rate could still fall further before stoking price pressures.

The market implications of this scenario are relatively straightforward: the US dollar would probably see a significant selloff (especially against the pound, which is supported by a potentially hawkish BOE next year). Meanwhile, equities and fixed income products should catch a bid on the extension of the Fed’s zero interest rate policy (ZIRP).

Scenario #4) No rate hike with hawkish comments and projections

Our final scenario is, in our view, the most likely outcome of tomorrow’s meeting. Here, the Fed acknowledges the recent financial market volatility and concerns about a global slowdown, but still maintains an optimistic outlook on the US economy. Beyond the obvious lack of a rate hike, the SEP would likely show a more positive view of the US economy, with most “dots” (individual Fed member expectations) still pointing to a rate increase by the end of the year.

When it comes to the markets, this is seemingly the expected scenario. While we would expect some short-term market movement here (likely selling of the greenback and modest strength in equities and bonds), the most notable feature of this scenario for traders may be the lack of major volatility. Therefore, we would expect the established market trends to quickly reassert themselves and stretch further over the coming weeks and months.

Regardless of the Federal Reserve decides tomorrow, it’s important to remember that the Fed is still the most hawkish of the world’s central banks. Whether it opts to raise interest rates in one day, one month, or one year, it will still likely beat its major rivals to the punch, so traders should be sure not to lose the proverbial “forest” (interest rates will eventually rise in the US) for the “trees” (the exact timing of that rate hike).