By :
Fiona Cincotta
,  Market Analyst
There was little supporting the euro on Tuesday. Souring risk sentiment amid the escalation of the US – Sino trade dispute was playing into the dollar’s hands, with risk aversion lifting the buck.

Those euro investors hoping to see factory orders in Europe’s largest economy recover in March were left disappointed. German new factory orders increased 0.6% in March from the month prior snapping 4 straight months of declines but still well below the 1.5% forecast.

Delving deeper into the numbers there was further cause for alarm, domestic demand has dropped, just as foreign demand has picked up.
The sharp fall in domestic demand will be a concern for policy makers, who had been counting on strong consumer demand to support the German economy whilst it weathers external headwinds such as the US – Sino trade dispute, the global economic slowdown and Brexit.


Data from the eurozone continues to be lukewarm at best and will do little to encourage the ECB to start raising interest rates anytime soon. The ECB remains in a dovish mood, with no plans to hike rates prior to March 2020. The minutes from the latest ECB meeting will be released on Wednesday.


Fed On Hold But For How Long?

The US economy, on the other hand looks to be in much better shape. US GDP unexpectedly jumped to 3.2% in Q1, April’s NFP showed a stellar 263k jobs wee created. Should numbers continue along these lines then the Fed could take their finger off the hiking pause button sooner rather than later. 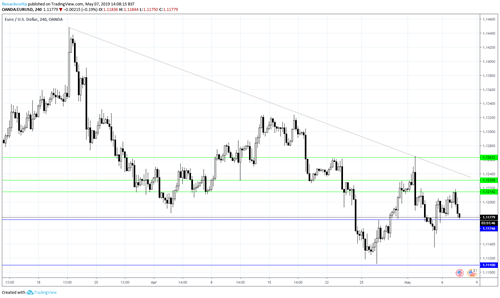 Yes, inflation may have peak but it “remains far too high”
By:
Matt Simpson